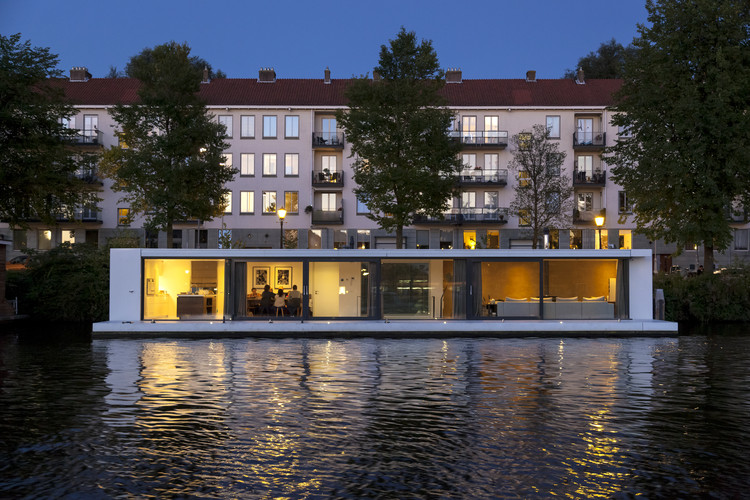 Text description provided by the architects. Living on the water becomes more and more popular in the Netherlands.

It is not only becoming popular because people are attracted by the sphere but also because of the new approach of the government and urban planners to coop with the new submerged water problems. Most part of the Netherlands lies beneath the sea level, to protect the land against flooding, dikes and dunes have been built. Currently new problems are rising due to the climate change; the big rivers that enter Holland bring more water each year and the rainfall is increasing. Because the sea level is higher at most places the water has no way to go other than flooding the land.

One of the solutions for the flooded land is not to build dikes to protect it but regulate it and make big water basins out of it. At one hand you can create nice urban developments on the water and at the same time you create buffer for rainy times. The only restrictions for the urban development’s is that is has to float, otherwise the basins can’t have a buffer function.

Generally there are two basic principles for making floating constructions. The first is the pontoon principle; you make a solid platform that is lighter than the water. The second principle is based on the ship; it is a hollow concrete box which is open on the top. Due to all the air which is in the open box it gets the ability to flow.

The pontoon principle has the benefit that you can use it in shallow water, compared to the hollow concrete box it has less stability and should be very light. The concrete box has the benefit that you can use the space within as a part of your building. Both floating constructions are connected with a flexible connection to the quay, so the construction can rise with the water when the tide changes.

When needed the floating system can be moved elsewhere at short notice without leaving any scar to the environment. Instead a new house can be placed in to the old situation which makes it the most sustainable and durable way to build.

The floating houses shown by +31architects are based on the hollow concrete box.

The clients of + 31ARCHITECTS were inspired and charmed by the design of the modern “Watervilla the Omval” that they designed a little further downstream on the river Amstel. They also wanted to build a modern watervilla in which the relationship between the living area and water would be maximized. The result is a modern watervilla which is characterized on the waterside by a film frame-like glass façade.

In this watervilla the largest glass sliding doors were placed on the waterside making a great unobstructed view possible on the Amstel from the living area and kitchen. To enlarge the interaction with the outside and the water a floating terrace is moored along the entire length of the villa. The floor is extended from the inside to the outside not only having the same colour but also the same height.  This does not only makes the living area feel larger but also gives the glass façade a nice framework when seen from the water. The almost absence of a physical barrier between the living area and the terrace invites people to take a refreshing dive into the river Amstel.

Descending a staircase with floating steps you can enter the basement where the bedrooms and bathrooms are located. The staircase is placed inside a big void. At the other side a large window is placed directly next to the open void to ensure an explosion of light deep into the basement. For this project many smart details were made. For instance at the waterfront there are three large sun screens that are fully integrated into the edge of the flat roof. With a push on the button the sun screens will slide automatically outside for a cooling effect.

In order to give depth to the facade on the quay side there is a subtle pattern of holes in the façade. By defining where not to punch a hole in the aluminium panel the house number appears. During the day the holes are dark dots whilst in the dark the holes are lit by a large LED strip that is placed behind the facade. In the evening the watervilla transforms itself into a "Star Wars-like" creation.

The film frame-like glass façade offers great veins on the water but occasionally also give a glimpse into the life of the residents. For the boats that are passing it looks as if a movie is played like a small intimate reality show. 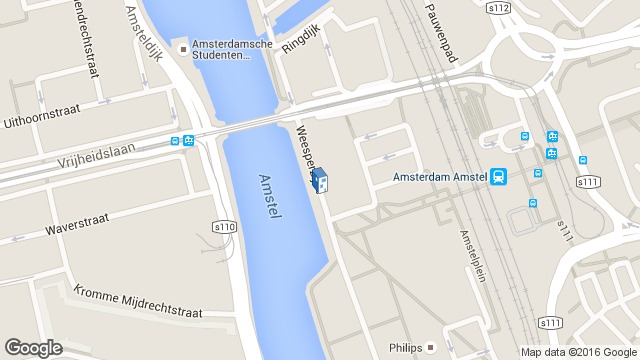 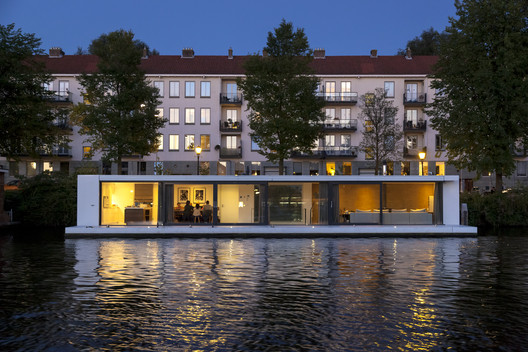