Save
9 Aesop Stores that Revitalize Architectural Simplicity
Share
Or
Copy

Australia-based cosmetics company Aesop is clearly dedicated to design. Over the years, the company has worked with architects such as Snøhetta, Paulo Mendes da Rocha, Torafu, and Ilse Crawford to create unique stores around the world.

To pay "tribute to the creative processes, materials and features" that characterize each of its store designs, Aesop has a launched a new website called Taxonomy of Design. Inspired by the compendium, we’ve rounded up some of the best Aesop store designs, each of which is distinctly developed, largely by local designers who are inspired by the location of the store. Read on for nine Aesop shops that revitalize architectural simplicity.

From the street, the clean lines of the crystalline façade give a glimpse of what is to come. Two large windows frame an antique water pump that greets visitors, a temporal anomaly in the contemporary setting – a tangible reminder of Kyoto’s significant heritage. Ostensibly a black and white space, the play of light and shadow is crucial to the experience. A sheer screen of black mesh fabric separates the entry passage from the main store. Depending on the perspective it appears as a veil or a backdrop, filtering and distorting the surrounding elements. Behind this, Aesop products hang like calligraphic scrolls, the graphic abstraction of the bottles becoming part of the design.

Rigour and repetition in detailing defines the space: 427 oxidised steel pipe caps–the same as those used throughout the city’s drains – are upturned and mounted to the wall to furnish small individual display shelves. Highlighting the aesthetic attributes of an otherwise purely functional item, they express appreciation for the precinct’s industrial heritage. The arrangement of the caps, striking in the scale of its application, works with the uniformity of the Aesop packaging, forming a graphic pattern across one wall. Their rich colour–a blackish rust that attracts the eye to its lightly reflective quality–stands out against the predominantly white interior. A larger version of the same cap is used as a sink, embedded in the plaster counter.

The ‘Gray Lady’ has been a lifeline of information for New York City and beyond since its inception in 1851. Here, 2800 reclaimed copies of the iconic daily were cut into 400,000 strips, which were then stacked and bound to craft ‘bricks’ of paper that line the walls and create joinery. The application deliberately steers away from using text as an aesthetic element – the words obscured and abstracted, turned in on themselves. The accumulation of the pages’ fringed edges gives the surfaces a delicate softness, forming ripples and seams that appear like marble veins in the grey masses. The paper will continue to respond to its environment, gradually showing signs of ageing. As the leaves yellow with the years, they will become a testament to the time captured within and passing around the pages.

Inside, the walls are coated in a deep, dusky pink that immediately soothes the senses with its rosy warmth. Dark concrete flooring adds a contemporary touch and is a strong support to the feminine palette. Three antique Viennese fountains assume the place of sinks along the wall. Made from moulded cast iron coated with white enamel, their ribbed bowls are backed by decorative panels surrounded by floral embellishments. Their slightly crumbling, aged surfaces fit perfectly with the historic context, while new brass taps ensure they are fully functional in their contemporary application.

A distortional dialectic between fine, geometric logic and organic shapes pervades the space. Eyes are first drawn to the floor of the store, covered in original encaustic tiles, inlaid with delicate interlocking star shapes in blue and brown. This heritage element was restored to add brightness to the colours, and has its contemporary response in the light-toned squares of the waffle ceiling above. Commanding attention in the centre is a large, amorphous floating concrete joinery unit with undulating edges, anchored by a black supporting column. Used for product display, it also houses display sinks decorated with brass taps and spouts, which emit gentle, fountain-like sprays. The heft of the unfinished concrete reflects the construction materials used in the surrounding environment and adds a calm gravitas to the space. Three circular plinths in the same material sit in the front window, their imperfect edges a reminder of the value of decay and patina in a world that can sometimes feel too glossed over.

The series of ten domes positioned across the ceiling is a striking intervention. Fabricated from fibre-reinforced concrete, each piece consists of pre-cast wedges, which were assembled before installation. The matte gypsum plaster finish affects a light plasticity belying the weight of the material, while the curves offer acoustics and a disarming volume, amplified by the rear wall lined in mirrors. Concrete has also been used in the central joinery piece, which is read almost as the negative image of the domes with curved voids carved off the corners. A smooth sink, suggestive of a baptismal font, is inlaid in this unit, adorned with brass taps and product trays that offset the icy palette while adding to a sense of the mystic. In contrast to the irregularity of this piece, a second counter towards the back appears as a simple rectangular prism, and features a black vintage desk lamp.

Occupying the rear wall is a black and white watercolour painting in homage to The Paris Review – a reminder of the juncture where the image meets the written word. The counter area is anchored by the curves and lines of mid-20th century design: a desk in warm timber is topped by a Joe Colombo reading lamp – a black and chrome piece with a curious, humanistic quality. A companion floor lamp off to the side helps shed more light on the subject. Fluorescent tubes along the wall evoke the utilitarian beauty of public reading rooms. Enveloped in words that have engaged countless readers with exemplary works of poetry and fiction, Aesop Chelsea is a love letter to the art of the pen, brought to life through the experience of the senses.

Upon entry, visitors are presented with a tactile transition accompanying the short staircase that descends from street level to the basement level of the brownstone in which the store is housed. A rail in white Oak – a timber used throughout the city’s buildings – tops a black wrought iron balustrade, the vertical bars an ascetic reference to the more elaborate filigree exemplars found in the surrounding housing. Despite the subterranean location, the bright, natural materials and white ceilings appear to draw light inside, contrasting with Aesop’s dark amber packaging. Reclaimed white Oak boards cover the floor, while blocks of the same timber form strips that wrap the walls, intermittently swelling out to become shelves – an amorphous, horizontally ribbed sculpture. This shelving is achieved by the ingenious placement of traditional New England style cornices, usually used to join ceiling to wall. Here, agglomerations of their moulded lips and grooves hold and display the product range.

The Northwest district of Portland, also known as Nob Hill, is built around a cluster of Victorian houses that now play host to one of the city’s most prominent retail destinations – a charming precinct that embodies the laid-back charm of this West Coast city. Aesop’s inaugural Portland space is located in a historic building on one of Nob Hill’s major thoroughfares, NW 23rd street. It shares a designer – John Randolph – with a second Portland store; when viewed together the two form a chiaroscuro effect, with each the negative image of the other. On NW 23rd street, a predominantly white palette and the use of light structures, usually seen in semi-permanent contexts, lend the space an ephemeral feel, anchored by the intricate construction techniques and the durability of industrial materials and objects. Part general store, part apothecary, the interior embodies a deep understanding of the Portland’s heritage and port location. Its recent renaissance as an artisanal mecca is also represented, via Randolph’s characteristic fusion of art and architecture.

News and project descriptions via Aesop
Videos by Pedro Kok for Aesop. 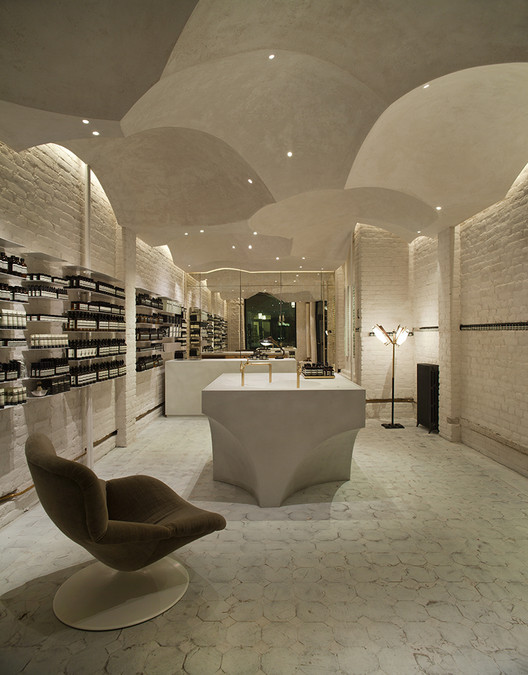