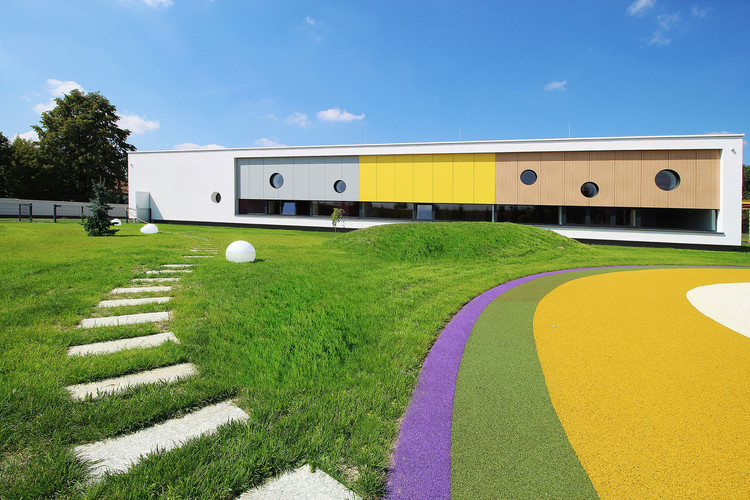 Text description provided by the architects. Kindergarten was designed as groundfloor, atrial building with 5 rooms (2 for nursery and 3 for kindergarten). It is planned for 125 children. Pent roof is in glued laminated timber construction.

Interior courtyard with sandpit and tree is a „heart of the building”. The facade from courtyard is opened to the atrium with large windows to allow a maximum of natural light. Locker rooms have direct conncection with classrooms. Windows from locker rooms can slide open to let children go to the garden in the shortest way possible.

Glazed corridors and low roofs are passages of courtyard. They blurs the boundaries between inside and outside. Roofed arbour close the composition. It can function as a scene or audience.

It was the most important aspect which impact for the building shape. The heights of entrances, roofings and windowsills were subordinated by scale.

Entrances and roofings were designed in 2,3m height, so that a childen entering the building feels more " homely " scale. The heights were maximally reduced especially for the children, that they can feel that building was designed for them.

Classrooms windows are long with low lintel adjusted to the child's height. Thereby they are more accessible to kids and help them contact with the outside.

The building was located with respect to the world directions to ensure the required insolation. Also there was kept in mind a high level of shading in the inner courtyard.

All the classrooms lintels are on the same level – 1,5m. Each classroom has 2 or 3 skylights. They provide diffused light which don't overheat the rooms. Courtyard arrangement was subordinated by sun path.

The playground between the building wings is safe and comfort place for the kids playing in the sandbox and in courtyard arcades. During the day interchangeably the half of the courtyard is shaded.

Modular arrangement given the opportunity to create a very simple and clear functions:

The corridors function as a locker rooms. They are well lighted, glazed and conntected with courtyard.

In conclusion the kindergarten life goes around the courtyard "magic" tree. Roofed arbour and courtyard completes the building.

The wings of the building are also a barrier against the wind, which increases the length of time thatchildren can safely and comfortably spend outdoors. 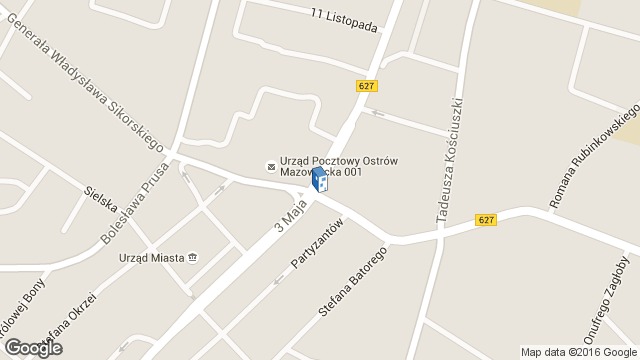 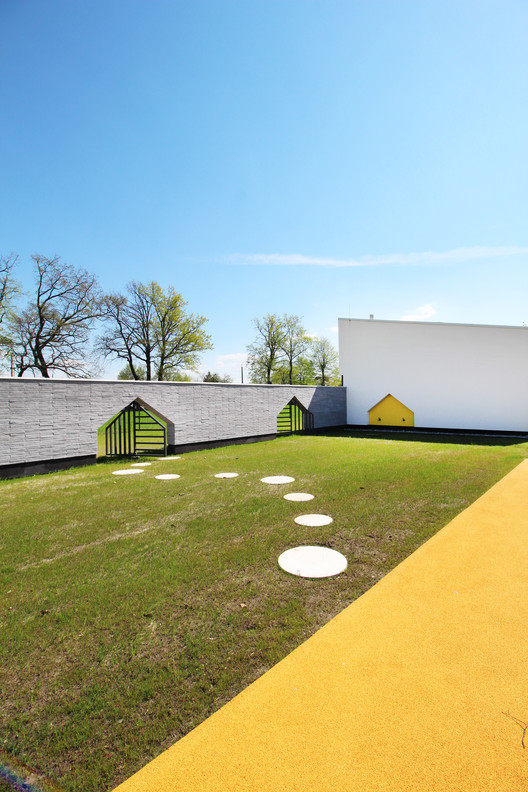 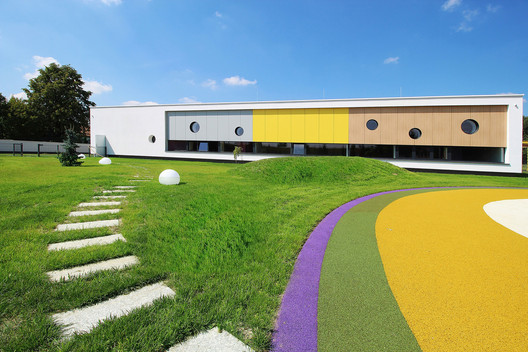