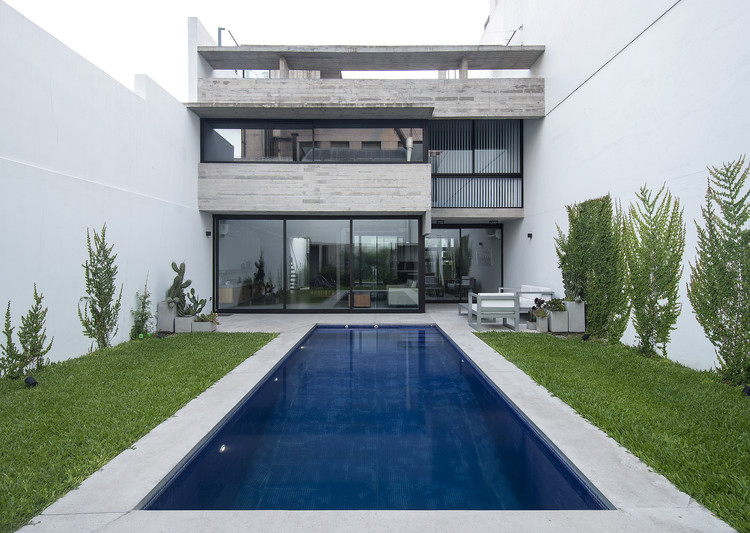 Text description provided by the architects. The commission was proposed by members of two families who shared a narrow and deep lot in Colegiales, an area of the city of Buenos Aires which is changing as a result of the significant amount of multifamily housing built in recent years, but which still maintains certain neighborhood characteristics.

The owners established both a program and maximum costs for each home as well as the location of each of the units in the lot: one in front and one behind, both with a courtyard and pool.

The required materials and form were consistent with what we have defined in several of the houses built by the office: simple volumes of exposed concrete, with minimum maintenance over time, and generous openings to facilitate a smooth interior and exterior relationship.

Another requirement was the need for the project to appear sufficiently closed to the public highway or to ensure the safety of both houses. In addition, the project should allow parking for at least four cars.

The proposal was defined with the decision to release the ground floor of the first unit to allow a smooth passage to the back unit and allow for the required parking spaces.

From this decision we designed a set of two houses that achieve independence from their location in plan and in section from their yards.

Each house is designed in a compact volume of two levels to release as much ground as possible. The main rooms are oriented towards the back seeking the north and service spaces are designed toward the facade (in the case of the front unit) achieving the required opacity with respect to the street and, in the back unit, into the open space generated between the two built volumes.

The built mass that determines each unit is perforated so that a small courtyard is is designed, providing double ventilation and lighting effects to all environments, introducing vegetation inside the house.