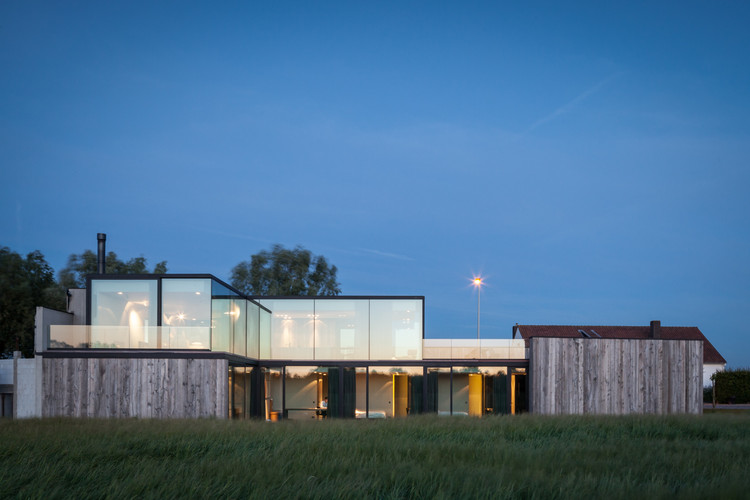 Text description provided by the architects. In the 9th century, the Graafjansdijk (dike) protected parts of France and Belgium against the storm tides from the North Sea and the Western part of the river Schelde. Currently only a short strip of this dike remains in the rural surroundings of the seaside village of Knokke, near the border with Holland.

Across the road from the Graafjansdijk is the narrow plot, enclosed by an adjacent moat on the north side. The terrain overlooks an open meadow. This geographical context has a major impact on how the design of the villa was perceived.

the ground level of the villa fully occupies the narrow terrain, apart from a small inner garden on the north side. It is completely wrapped in barnwood alongside the road, hiding the garage and creating a private atmosphere for the bedrooms. This materialization produces a solid plinth contrasting with the transparent volume on upper floor. This subordinate upper volume, containing the living room and kitchen, is made completely out of glass and is a lot smaller than the closed volume underneath. The barnwood walls extends 1 meter above the first level and functions as a railing for the terrace.

The north side opens up completely on both levels, allowing views over the meadow from the living room and kitchen on the upper level , as well as from the bedrooms downstairs. The crops growing on the north side still allow for some privacy in the bedrooms.

The same architectural materials from the exterior are applied throughout the interior. The intimate bedrooms combine a cosy black Tadelakt floor and walls with bespoke barnwood furniture. The same flooring continues on the upper level, combined with a bare metal kitchen counter. The free standing barnwood kitchen closets frame the view over the dike, rather than overexposing it. Past the counter lies the terrace, where the risen barnwood plinth creates privacy.