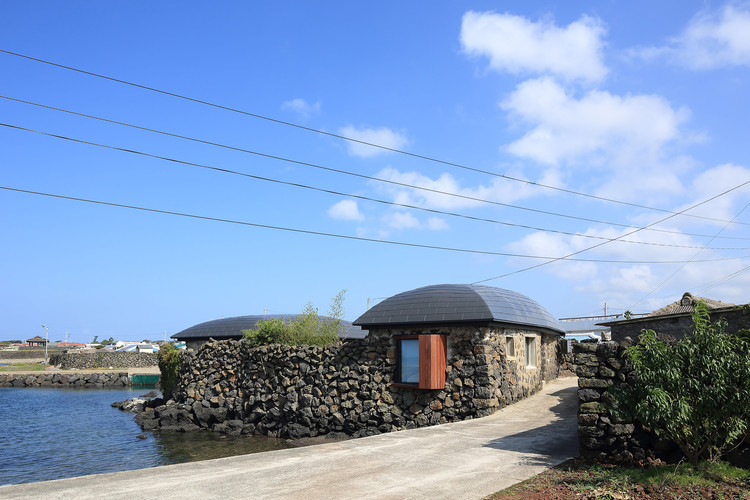 Text description provided by the architects. The ‘Blind Whale' project investigates the value of Jo-cheon that is unique to Jeju Island. Jo-cheon refers to a sense of place and ‘Blind Whale’ achieves this by maintaining the round shaped roof that was once made of fishing nets.

This type of roof is a  feature unique to Jeju farm houses. Jo-cheon village was settled about 800 years ago, in the early fourteenth century. It was considered by the locals as a waiting place where the mild winds  gently blew ships of people headed for the mainland. Jocheon,  also held a strategically significant location.

From the Korea Dynasty to Joseon Dynasty period, Jeju island was used for exiles. Those who were exiled came together at Jocheon, a locations slightly closer to mainland where their family and the king lived.

A stone house that overlooks the Yeon-buk-jung (Yeon-buk pavilion) in the middle of Jocheon village is considered to bring luck to those who reside in it. According to the Jocheon residents, this stone house has stood for over a hundred years.

What’s more interesting, is shape of this stone house. The rounded roof looks like whale. It was weaved from nets and anchored down using stones so the wind wouldn’t blow it off. We named it after the ‘Blind Whale' which believed to be  buried in the sea. The roof  looks like two whales that have drifted far from the sea and washed up on the land.

In keeping with the name ‘Blind Whale’, the aim of the project was to retain the sense of place and existing materials the location had to offer. In the past, the Jo-cheon people aspired to travel from here to the mainland but now many people long to come froçm the mainland to Jeju. We also people on land, in view of this, only rounded roof and walls made us feel like Jeju Island sensibility itself.

In an effort to promote eco-tourism, a program was set up with local input and guidance so that Blind Whale can coexist with the environment and community. One way in which we did this was by maintaining the original size and shape of the building and only offering lodging though private rental.

The elements of the home we wished to put emphasis on were the rounded roof, stone walls and garden between the two stone houses. To preserve original state, we lowered floor level. And keep a Jeju stone house, low height and juju stone wall. We installed a window to open up seaward views.

Elements of the home such as the  flooring and gates were upcycled into tables, beds and other pieces of furniture. We aspired to keep the traditional aspects of a Jeju farm house. An example of this would be the inside wall which was replaced with a lower wall which kept with the original design but allowed for better circulation of people.

The ‘Blind Whale’ project was successful case in revitalizing the value of a traditional Jeju stone house. Perhaps through this reconnection and renovation today’s generation will not feel the necessity to tear down the old and start a new but rather preserve their unique heritage. This project also gave us special meaning thatimportance of respect for heritage.

The process and end result allowed us to rediscover the value of this special place and space. it is our hope that this project will establish a precedent for other architects and developers looking to revitalize traditional areas. 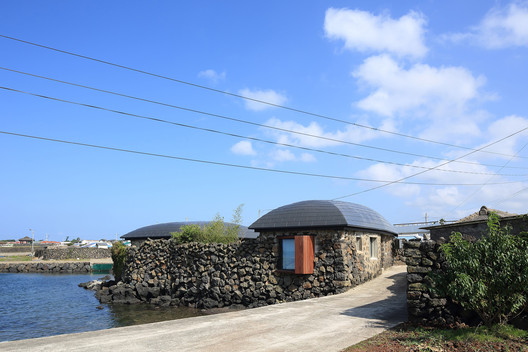