Save
"Grassroots Cactivism": Using Cacti and Eco-Tourism to Combat Drought in California
Share
Or
Copy

Although global warming may only be partially to blame for California’s now four-year, record-breaking drought – intensifying it by 15 to 20 percent, say scientists – the long term implications of the weather phenomenon are a preview of a drier future with less predictable weather patterns.[1] As ecology and architecture begin to share responsibility in the implications of climate change, future solutions will need to balance architectural needs with ecological imperatives. Many designers are accounting for water scarcity in schemes for the drought-stricken state, but only recently have ideas addressed this issue head-on. “Grassroots Cactivism,” an award-winning proposal by Ali Chen, suggests that the drought-tolerant nopales cactus, with a variety of uses, is an ideal candidate for aiding water-conservation in California.

Read on for more about this biological breakthrough in water conservation. 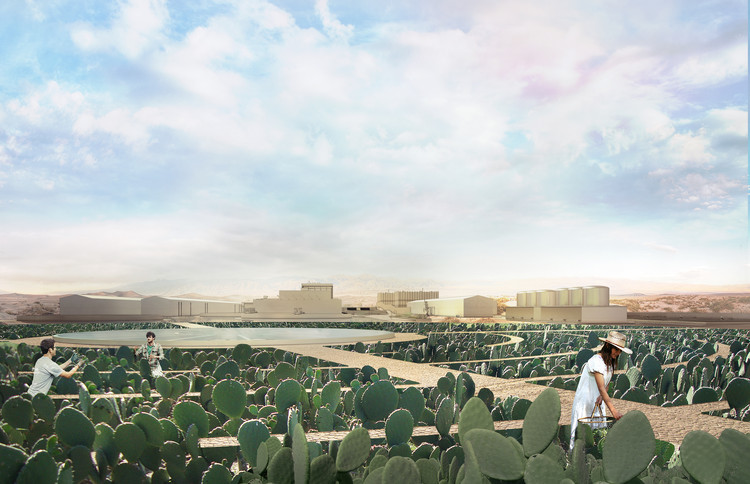 While personal water use in California has been reduced by 25 percent, agricultural use, only recently curtailed, comprises an alarming 80 percent of human water use (although adding environmental - ie non-human - water use to the equation reduces this figure to 41 percent).[2] In 2010, the last year of typical statistics, the state used an alarming 13.4 trillion gallons of water in urban and agricultural consumption.[3] Even more alarming, Chen notes, is that a large percentage of agricultural water is used on crops which are the basis for livestock feed.

The nopales cactus, better known as the prickly pear, is capable of growing almost anywhere in California. A mainstay of local culinary traditions and used to feed livestock in times of drought, Chen reports that the pulp of the cactus, or mucilage, also has water treatment capabilities. Historically used in Latin America to purify water laced with metals and other sediments, the home remedy is a fading practice. The purifying capabilities of the mucilage are also effective in oil spills, able to disperse crude “at much lower concentrations than synthetic dispersants,” says Chen.

The main objective of the “Grassroots Cactivism” proposal, is to create a “low-tech solution to improve and revolutionize existing wastewater management systems, as well as mitigate water usage in farming by supplying a crop that requires little to no water.” Cacti produced on a farm would be used for three functions: human consumption, pulp to be used in local bioreactors for water treatment, and animal fodder both in California and for export.

For the same reason that medicines bought at a pharmacy often win out over homeopathic solutions, such a radical proposal would require heavy scrutiny before supplanting more widespread wastewater treatment strategies. That being said, a 2005 study found that the gel component of cactus mucilage was “capable of precipitating solids in a third of the time it takes aluminum-sulfate, a compound used in wastewater facilities.”[4]

Most likely, if cactus-based purification is adopted, it would complement a solution like Orange County’s “Groundwater Replenishment System,” which treats wastewater and returns it to the drinking supply in a three-step process. First is microfiltration, which removes solids, oils and bacteria, next is reverse osmosis, where water is propelled through an ultra-fine plastic membrane that removes viruses and pharmaceuticals, and finally, the water is treated with UV light to remove any remaining organic compounds.[5]

Interestingly, Chen’s proposal anticipates a wave of interest and scrutiny by tying this altruistic venture to one more capitalistic: “The farm will not only be a local attraction, it will aim to attract visitors from all over by hosting an eco-resort marketed towards the health-conscious modern traveler, with cooking workshops, highly-rated fine dining, a water museum, and various resort amenities. The goal is to market the use of cacti in contemporary cuisine, grow awareness, provide funding for research, and slowly increase demand for a crop that can eventually replace other water-intensive forms of vegetable and fodder.”

While it remains to be seen how such a venture would be received, or at what scale it could begin to have noticeable benefits to the water-table, the science is incontrovertible. Chen’s hope is to send the message to Californians, “that drought issues can be mitigated and redesigned at a higher level of organization and agriculture, and that cactus is delicious and sustainable.” “Grassroots Cactivism” is a well-devised hybrid of architecture and ecology, where the two forces are united for mutual benefit.