Marking both an ending, and a beginning, the Menara Mesiniaga (Mesiniaga Tower) in Petaling Jaya, Malaysia (just outside of Kuala Lumpur), is the culmination of Ken Yeang’s years of research into passive strategies for tall buildings, and it marks the first in a line of buildings (what he calls his ‘Series 2’ towers) that fully realize Yeang’s bioclimatic design principles. The embodiment of his tenacious goal to bring passive design to the hot humid climate of Southeast Asia, the principles on display at Menara Mesiniaga have influenced subsequent skyscraper designs across the globe. 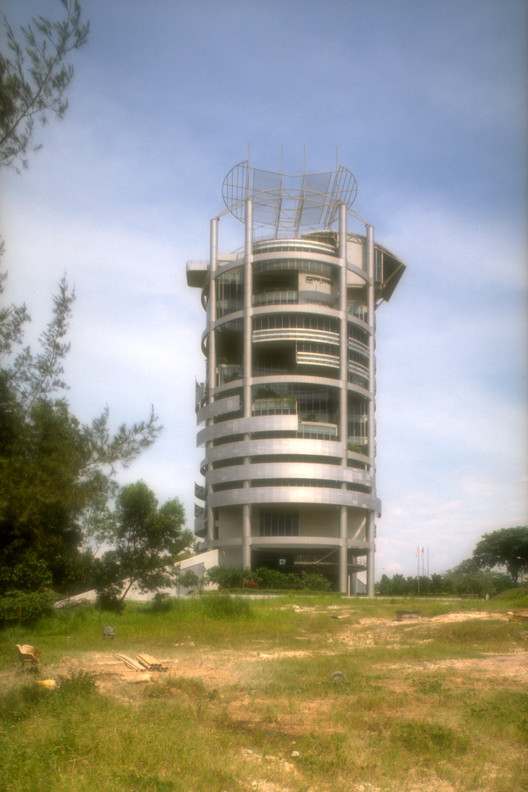 Though born in Malaysia, Yeang studied in England and the United States, first at the Architectural Association (AA) in London, then at the University of Cambridge where he also studied ecology, and finally at University of Pennsylvania for a landscape program under Ian McHarg.[1] His study of ecology gave Yeang a keen interest in the relationship between buildings and the environment, and the regionally appropriate designs encouraged by McHarg would have a significant influence on his later work.[2] After returning to Malaysia, Yeang joined with fellow AA alumnus Tengku Robert Hamzah to create the firm T. R. Hamzah and Yeang, in 1976.[3]

An interest in environmentally responsible and regionally adaptive designs seem diametrically opposed to the skyscraper typology, but in Yeang’s view the ubiquity of the skyscraper is a foregone conclusion in a rapidly urbanizing world, “why not try to improve it and make it environmentally sound.”[4] The scale of Yeang’s ambition to this effect is clear in the introduction of his book, The Skyscraper Bioclimatically Considered, when he says, “The theory of skyscraper design might, in the future, be derived in part from the ethic of energy conservation.”[5]

Built for IBM’s Malaysian affiliate, the high-tech appearance of the finishes of the Menara Mesiniaga belies the passive strategies that Yeang employed in the building. The building form serves as a diagram of the various passive solar and natural ventilation principles that informed the design. The structure of the circular tower is supported by eight columns just outside the building envelope, allowing maximum flexibility on the interior. The naturally ventilated elevator and stair core is located on the east side of the building to block the solar gain from the intense morning sun.

The tower rises from a planted berm at the base, and the vegetation continues upward in a spiral of landscaped “sky courts” carved from the cylindrical facade. In addition to promoting air circulation and natural ventilation, the sky courts provide a connection to nature for the building occupants, in stark contrast to the monotony of typical commercial construction. The deep recesses of the sky courts also provide shading for adjacent interior spaces, while floor-to-ceiling glazing, and sliding glass doors maintain contact with the exterior.

To supplement the sky courts, the facade is treated with aluminum louvers that help prevent solar heat gain. The arrangement of the louvers illustrates the equatorial solar path at the site: the north and south facades, which receive the least direct sunlight, are shaded with thin strip louvers, while the western face of the building is shielded by wide bands of aluminum that almost cover the entire window to block the harsh afternoon sun.

At the top of the tower, a crown of tubular steel is intended to support a future installation of photovoltaic panels to supplement the electricity needs of the building. This crown also provides shading and protection for the recreation area and swimming pool on the roof deck.

On the interior, Yeang arranged private offices in the middle of the floor plates, placing open office spaces near the perimeter–more than a decade before Renzo Piano employed the same technique at the New York Times Building. The private offices have glazed walls that allow for optimal utilization of natural light throughout the interior.

In 1995 the building received an Aga Khan Award for Architecture. Given every three years, “the Award seeks to identify and encourage building concepts that successfully address the needs and aspirations of societies across the world, in which Muslims have a significant presence.” The award jury praised the unique design and climate responsiveness of the building. Juror Charles Jenks hailed the tower as “a striking alternative to the reigning mode of corporate towers and a new synthesis for contemporary architecture that is responsive to the climate of a particular place and finds inspiration for a new architectural language from forces that are ultimately cosmic.”[6] Peter Eisenman, also a member of the jury, simply remarked that “Menara Mesiniaga is one of the few projects that contributes new thinking to the general culture of architecture.”[7]

Yeang's visionary tower was not without its weaknesses. Multiple sources have reported that the hot humid climate has contributed to rust and corrosion on the metal finishes, and pooling of water on the floors of the sky courts.

Perhaps Menara Mesiniaga's greatest achievement is its influence on other architects, beyond the tropical climate of Southeast Asia. In the era of the supertall skyscraper, Menara Mesiniaga’s diminutive fifteen stories has had an outsized influence in tall building designs. Yeang's spiral of sky courts has influenced such iconic structures as Norman Foster’s Swiss Re headquarters in London (also known as “The Gherkin”) [8], and a similar strategy can also be found in the design of Gensler’s Shanghai Tower. 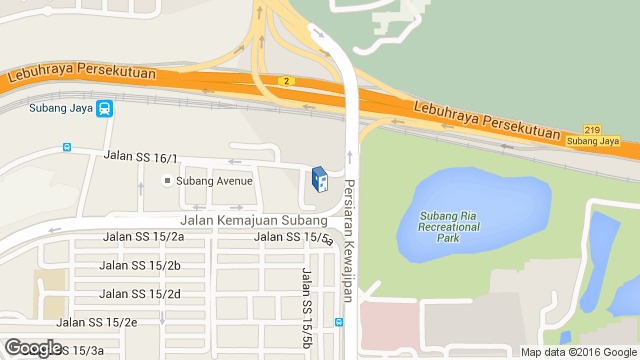