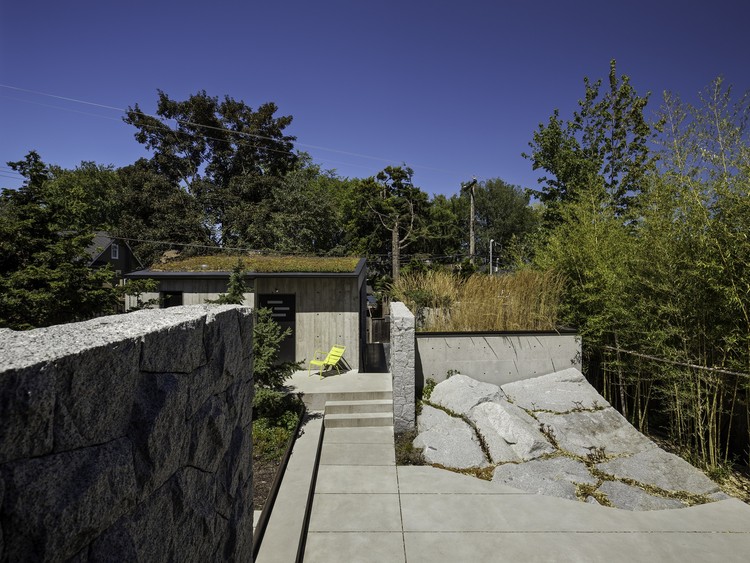 Text description provided by the architects. At its root, the Cloister House is a quiet refuge, a state of seclusion within the city, shared between a grandmother and her grandchildren. A finely crafted spine wall anchors the plan of the house, travelling from the front of the project to the rear. Whimsical kid-friendly elements are present, from an undulating boulder landscape to custom steel slides that run alongside the internal staircases. The hilltop site offers long views of the mountains and ocean which are balanced with shorter internally-focused views to the intimate pocket garden. Local artist, Fei Disbrow, designed a weathering steel wall sculpture + ladder surround that serve as backdrop for the pocket garden allowing filtered light to enter while providing privacy from neighbours. Materials commonly perceived as ‘cold’ were manipulated to achieve a palette of textural warmth inside and out: hand- worked masonry, charred board-form concrete walls, and blackened steel are the textural triptych which provide a sense of harbour.

A small Laneway House (containing a dwelling unit and one-car garage) is an extension of the Cloister House. Completed after the main house, it became the final destination for unused building materials from the earlier project, such as the charred lumber. Its small size necessitated clever use of built-in storage and a singular palette of materials. With the sleeping quarters subterranean, the building is carefully carved into the sloping site to complete the cloister feel of the project as a whole, providing a naturalized green roof view back to the main house, achieving light and livability for the laneway and maintaining privacy for all users.

The overall design unites seemingly contrary characteristics: deliberate darkness, industrial materiality, organic landscape and playfulness. An article by Adele Weder in Azure Magazine referred to the project as “an architectural introversion”; buildings that “resonate with drama inside while projecting quiet modesty to the street.”

The site was home to a 1940’s tear-down bungalow, toxic and in poor repair. Rather than demolishing the existing house in the traditional manner, Measured participated in a Pilot Project with City of Vancouver and Pacific Community Resources to sustainably deconstruct the building for salvage, recycling and reuse, employing at-risk youth as part of a job training initiative. The project exceeded the program’s goal by sorting over 90% of the resulting material for recycling or re-use, and the process imparted a positive tone and spirit to the project which were consequently influential in the fabrication of the new house.

The Cloister House and Laneway is an essay in concrete; its applications in the project are extensive, highly varied and in some cases unprecedented. The custom steel slides flanking the staircases reference the pour chute on a concrete mixer, providing a nod to the design’s conceptual framework, a playful experience for the client’s grandchildren and a placeholder for future changing ambulatory needs. The construction team worked with a modular formwork system using shop-built 4’ x 8’ units faced with charred tongue and groove fir planks that could be easily maneuvered on site and re-used from pour to pour. The charred planks left a rustic, high-relief surface on the concrete that matured over successive pours. To jump start the construction process in advance of municipal permit approvals, assembly of the modular panels began off- site. Alongside the benefits of keeping environmental pollutants out of the neighbourhood, this innovative strategy led to a more compact construction schedule. In the spirit of upholding waste-conscious building practices, the leftover concrete from each pour was used to make rectangular stepping stones for rear yard pathways. Moreover, a portion of the planks used for the concrete formwork were re-charred and re-used as soffit panels and interior walls. The resulting look was an elegant preservation of the tools of formation alongside the finished product.

The threaded form ties that pass through the exterior concrete walls double as the attachment points for removable interior panels of Venetian plaster and white oak millwork that soften the concrete shell while providing easy access to electrical wiring running behind. “The material choice also enables a hyper clean environment, essential for the client’s asthma (for this reason there is not an inch of drywall in the entire project). Above all, this is an architecture that celebrates the underrated glories of the dark and dense enclave” (Weder, 2014).

Between the house and the laneway, an undulating boulder landscape appears native to the site but was carefully composed as a whimsical, kid- friendly play surface. Measured called on Japanese master stone mason Tamatsu Tongu to craft the boulder landscape and the feature walls. Together, we selected the stones from the quarry in Squamish, where Tamatsu then fashioned the rock before having it delivered to site. All of the masonry was locally sourced through Bedrock Natural Stone. 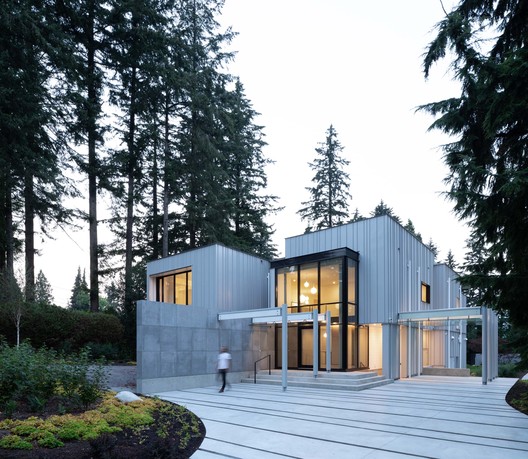