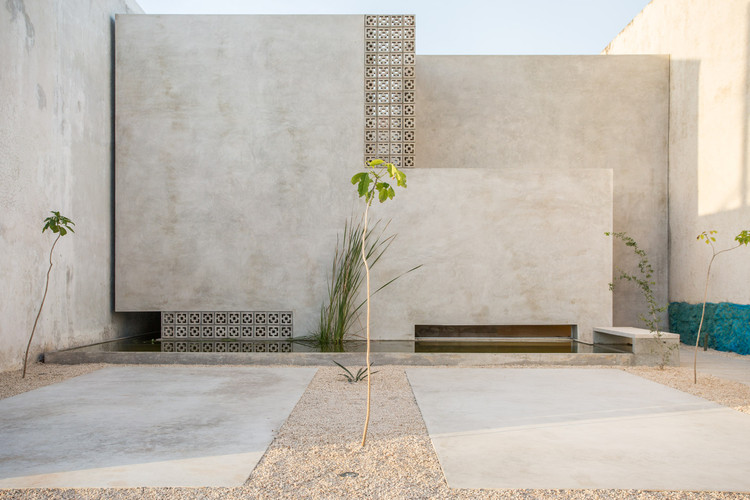 Text description provided by the architects. Gabriela House is a single family house located in an area in the process of urban development of the city of Merida, Mexico. The aim was to provide the user with a serene yet convenient haven, which had security considerations, thermal comfort and energy efficiency, and low cost of construction and maintenance.

The house is tucked away from the street. Along with the walls of the adjoining properties, it generates a small square, which was designed as a public space with the goal of producing a use to the public street, a feature of traditional Yucatan architecture contributing to neighborhood safety .

This is the space before access to the house, which is accentuated by a water feature formed by an area of organic elements that works as a control for mosquitoes and provides oxygen by natural means to another area that is accessible for recreational use. This element is viewed from all social areas of the house, with special interaction with the entrance hall.

The architectural program considers a social area where the kitchen and the dining room converge; an intermediate services area where the bathroom and laundry closet are located; and finally a bedroom. Both the social area and the bedroom have rear semi-outdoor terraces which are perceived as extensions of the rooms. From the social terrace one can reach the back garden and an open rooftop courtyard.

The climate of the region allows multiple openings to be closed only with mosquito net, allowing a constant natural ventilation. Double heights have openings that allow the evacuation of hot air, achieving a comfortable interior temperature without using artificial means.

The building system is the most common in the area, made of concrete blocks, beams and slabs. These are manifested in the lower side of the slabs covering the double heights. Low ceilings are thermally insulated with polystyrene panels. Vibro-compressed concrete lattices protect the interior of the house from sunshine, rain, vandalism and hurricanes.

Architectural finishes are exposed. The floors are concrete, as are the pre-cast in place plates with which the fixed furniture was assembled. All walls and low ceilings have a waterproof cement based stucco. The proposed vegetation is mostly endemic. Iconic species of the local culture, which attract other wild birds, and finally fruit trees, vegetables and herbs for human consumption were considered.

Color is present on the thresholds at the front and rear access, as well as functional furniture and home accessories. They were chosen from a range found in craft elements of local culture, as well as their ability to dialogue with the different shades of blooms in the gardens. 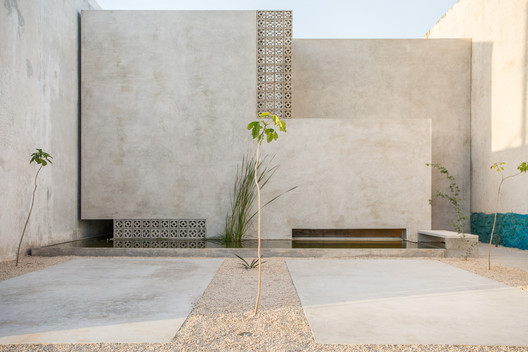