Tap a button on your phone and hop into the shower; walk downstairs 15 minutes later, and you have a fresh pot of coffee waiting for you. That’s a ritual that is no longer just a fantasy for many people. The rise of the internet of things has allowed us to control remote appliances with just a tap of the touchscreen. Until now, the scale of these processes has largely been limited to personal devices: anything from brewing a pot of coffee to warming up your car on a frosty morning. But what if we could grow food for thousands of people, with that same tap of a button? That is the goal of Forward Thinking Architecture’s “Smart Floating Farms” project. 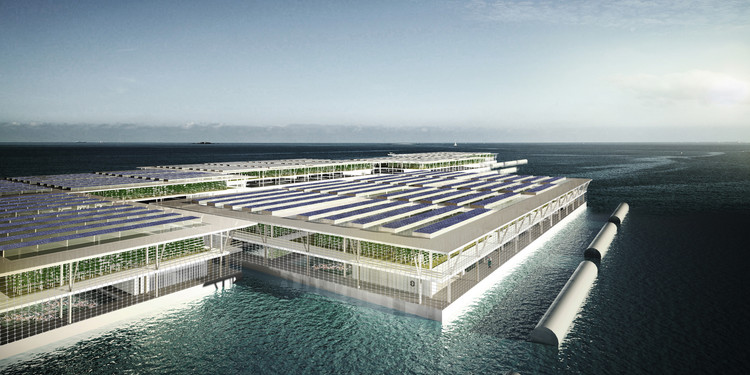 The Barcelona firm’s design comprises a multi-level agricultural barge that can be constructed, pushed out to sea, and left to work mostly on its own. The farm is designed to operate on three levels: a bottom level containing wave barriers, an aquaculture fish farm, a slaughterhouse, a packing facility and desalination plant; a second tier for hydroponic and aeroponic food production; and a rooftop level featuring skylights to let in light and photovoltaics to provide the energy required to power everything.

At 656 by 1,150 feet , each level is approximately 750,000 square feet - enough room to grow up to 8.1 tons of vegetables and 1.7 tons of fish per year. The architects estimate that this would cover the project’s expenses within 10 years. And since the farms are modular, a few or many of these structures could be grouped together to provide enough food for entire communities, especially those located in areas without arable land, or with a population so large it overwhelms its food supply capabilities. And unlike other forward-thinking agricultural techniques like urban farming, it spares valuable land space for other types of construction.

As well as making the farming process autonomous, putting the structures on top of the water allows the farms to adapt to rising sea levels and avoid flooding issues common to traditional agricultural techniques. While this strategy may seem outlandish to the uninitiated, it actually has a long and successful pedigree, having been employed for centuries by Bengali farmers to react to dramatic changes in water level during flood seasons. The farmers construct beds in lakes and rivers using several layers of bamboo and water hyacinth, fill them with semi-decomposed aquatic plants and then seed. The beds are tethered to the lakebed to prevent them from floating away. This has resulted in production rates up to 10 times more fruitful than neighboring land-based practices.

However, the true innovation of the Smart Floating Farms project is taking non-traditional farming techniques and combining them with already-existing technologies. The world population is predicted to grow from 6.9 billion in 2010 to 8.3 billion in 2030 and to 9.1 billion in 2050. By 2030, food demand is predicted to increase by 50% (70% by 2050). The main challenge facing the agricultural sector is not so much growing 70% more food in 40 years, but making 70% more food available on the plate, and to react to these daunting figures, new agricultural techniques must be developed.

As the architects acknowledge in their design statement, the project “is not meant to solve all of humanity’s hunger problems or to replace existing traditional agriculture. The driver behind the project is to open a new initiative which can be complementary and compatible with other existing production methods in order to help reduce food risk associated problems in different areas of the globe.” One project alone will not save the world, but embracing the technologies available to us is a great start towards tackling these issues. If only it were as easy as the touch of a button.