Just two weeks after the Japan Sport Council launched a second call for New National Stadium proposals, Zaha Hadid Architects and partner Nikken Sekkei have withdrawn from the competition. Although the duo promised to develop a "cost-effective" design that strictly adhered to the new competition's scaled down brief, they were unable to secure a contractor and therefore were forced to step down from the competition.

"It is disappointing that the two years of work and investment in the existing design for a new National Stadium for Japan cannot be further developed to meet the new brief through the new design competition," said ZHA in a press release.

"Nikken Sekkei and ZHA are prepared and able to deliver a cost-effective Stadium that meets the revised brief, is ready in good time for the 2020 Games and provides a new home for sport in Japan for generations to come. While the current competition is closed to the existing design team we stand ready to use the wealth of detailed knowledge and expertise, built up through the thousands of hours dedicated to the project, to assist the National and Tokyo Governments and Japanese people deliver a Stadium fit to welcome the world in 2020 and go on to host national, international and community events for the next 50-100 years."

ZHA's original competition-winning design was scrapped in July for "spiralling costs." The New National Stadium will serve as the centerpiece for the 2020 Olympics in Tokyo. 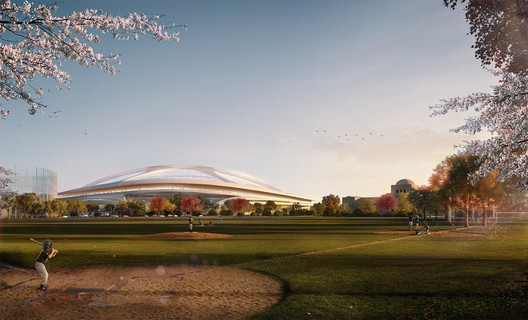