There is perhaps no better display of modern architecture’s historical victory than Jacque Tati’s film Playtime. In it, a futuristic Paris has left-for-dead the grand boulevards of Haussmann, in favor of endless grids of International Style offices. The old city is reduced to longing reflections of Sacré-Cœur and the Eiffel Tower in the glass of these shiny new monoliths. But the irony central to the film is that this construction is created through mere surface treatments, and as the narrative unfolds, cheap mass-production withers in a world where the veneer has triumphed over craftsmanship and polish. In short, Modernism hasn’t always been all it's cracked up to be.

In the Museum of Modern Art’s new exhibition, "Endless House: Intersections of Art and Architecture," the simplicities of mass-market modern homes are abolished by artists and architects who, in examples from the 1940s to the present, have chosen to use the dwelling as a platform for universal messages and as an arena for architectural experimentation. In the same way that photography freed painting from the terrestrial concerns of realism, the simplicity of modernism liberated artists and architects to subvert extant conventions of buildings. 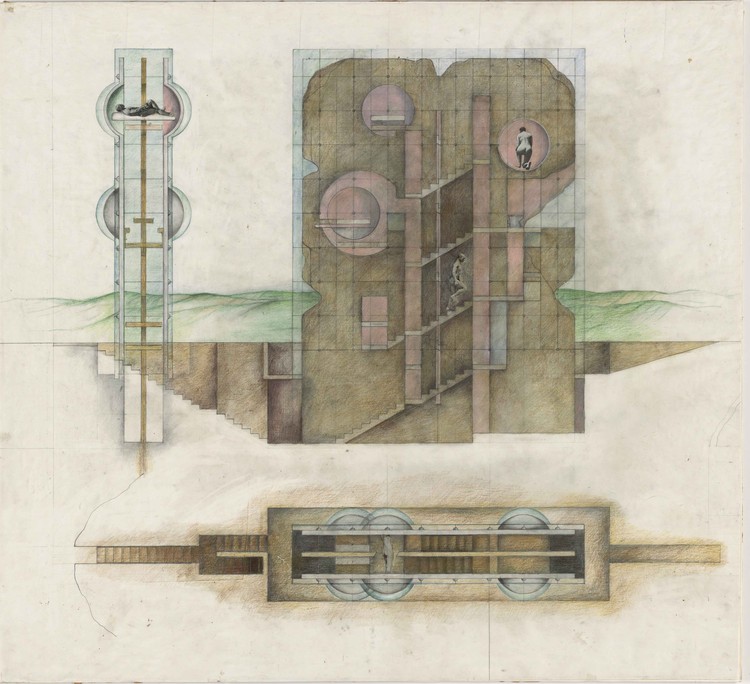 Organized by Pedro Gadanho – who recently left MoMA to become director of the Museum of Art, Architecture and Technology in Lisbon – the exhibition is tucked into a single-room gallery on the museum’s third floor. Separated into artworks hung on the encircling walls, and architect’s models on large plinths at the gallery’s center, the hang is loosely chronological.

While the exhibition takes its title from Viennese-born artist and architect Frederick Kiesler’s unrealized Endless House Project which was first exhibited at MoMA’s 1960 Visionary Architecture exhibition, in reality the current exhibition seems more closely tied to a myriad of latter twentieth-century tangents to architectural modernism, alongside equally subversive artworks. Kiesler's egg-shaped, biomorphic blob is but a loose point of departure for other proposals, all groundbreaking and irreverent.

Kiesler believed the house should be an organic environment, one synthesized through painting, poetry, theater and sculpture. Shown as a model, Frank Gehry’s Winton Guest House (1983-1987), is a collection of small interconnected pavilions, finished in plywood, brick, aluminum, galvanized steel and limestone, that pinwheel around a central pyramidal space. Inspired by the paintings of Giorgio Morandi, whose still lifes of bottles, jugs, cups and pitchers, verge on the architectonic, Gehry expresses the unconventional harmony of irregular forms in a project that honors the spatial elasticity that informed Kiesler’s designs.

Even Mies van der Rohe, one of the godfathers of the International Style, is presented as someone who was really quite a bit more subversive. His Farnsworth House, also shown as a model, is a modernist box that fetishizes materials and finishes, so much so that Mies wished for the paint covering its steel frame to remove any reference to its metallic origins. Although in contrast with its natural surroundings, the home is not a foil to nature, but a place from which to view and be embraced by the natural world.

Moving beyond being simply a place to live or an idyllic setting, the concept of the home has come to embody a greater scope of meanings through ties to social, political, and cultural concerns. In Martha Rosler’s collage series, Beautiful: Bringing the War Home, the Vietnam war is brought to our doorstep with a soldier sitting on the lawn of tract home, and a luxury home interior with windows out on to the frontlines. In a large etching by Bruce Nauman, House Divided, the words of political gridlock are brought into reality with a tract house, with three entrances that lead into an impossibly small room with a diagonal wall. In each of these works, the home becomes a synecdoche for the often fraught relationship between the American people and the actions of their government.

In Rachel Whiteread’s House, a drawing study on graph paper for a 1993 sculpture project, the rectangular blocks of a facade are filled and textured with correction fluid. Now destroyed, House was a cast of the interior of an East London home made by filling its interior with concrete, where once the walls were removed all that remained were the ghostly anterooms embellished with the subtle impressions of interior stairs and moldings.

While the exhibition can seem a bit rambling, with little coherence or rationale for why projects are included and are shown in a particular order or grouping, it does show the Modern’s commitment and prescience in regard to architectural innovation, particularly with new acquisitions by Asymptote Architecture and Smiljan Radić offering further evidence of the institution's architectural foresight. Radić’s Casa para el Poema del Ángulo Recto and Asymptote Architecture’s Wing House, shown at the end of the exhibit, are perhaps the most suitable bookends to Kiesler’s designs, with their swooping geometries and interlocking spaces. They are indicators that architects and artists will continue to adapt the home to changing tastes and shifting cultures, in a process as metamorphic as evolution itself.