Save
Penda Proposes a Transformable Design for the New Bauhaus Museum

Penda's proposal for the New Bauhaus Museum competition features a transformable design that serves as an “extension of the city on one hand and as a connector to the surrounding park on the other.” The design features two rotating platforms that can open to connect the museum to the sculpture park during the day and close at night. Although not selected as the winning design, Penda's "Flexible Bauhaus" proposal was one of the finalists selected to participate in the second stage of the competition. Read more about their proposal after the break. 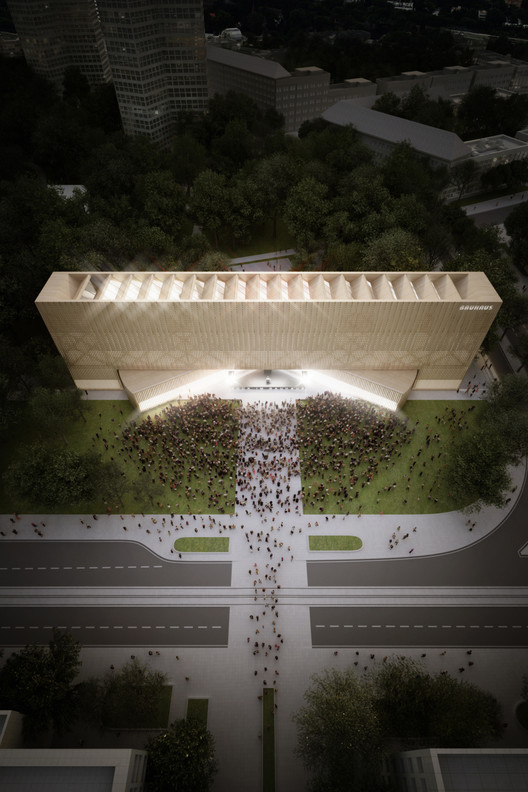 From the architects: Art and Technology: A New Unity
Resting on the description of Bauhaus by Walter Gropius: "Only perfect harmony in the technical function and in the proportions of form can produce beauty”, our design for the New Bauhaus Museum is a fusion of clear geometry and technological elements that offer flexibility and integration to Dessau's City Centre. Life in a city is multiple, ambiguous and in constant change. Our aim was to create a Museum that connects and interacts with those multiple settings of daily life in Dessau in a very direct and responsive way. Due to its ability to transform itself, the museum can react to various needs within the City Park and offers the possibility to become a connecting hub, which shapes the community around it and links its visitors to the vision of the Bauhaus era.

Bauhaus, its Vitality and its Spirit
The Bauhaus was an era of innovation and technical achievements, a new clarity in architecture, design and art. The Bauhaus is not about form. It is about the performance of form. Not about shape, but about the logic of shape. Not about aesthetics, but how to adapt aesthetics to a daily use.

Bauhaus was a shared spirit connecting art and life. Inspired by this spirit, we see the new Bauhaus Museum as a institution, which is fully integrated into the life of the citizen and its visitors of Dessau. We see it as an Institution, that connects and interacts with its surrounding. An institution, that adapts to the vivid nature of the City Park in a supporting way and as an dynamic platform hosting different sorts of events for its community.

The City, the Park and the Museum
With the Restoration of Dessau’s City Centre, the Museum site borders frequented and vivid areas of Dessau. Situated within the Park, the museum offers a urban centre point of important pathways and view axis. Due to its ﬂexible transformation, our Proposal reacts to the frequencies of the surrounding in a very natural way. When the 2 platforms rotate, the building opens up and invites people into the park and the museum. Therefore the building aims to be an entrance sculpture to the park. At night and at times the area is not heavily frequented, by closing its platforms, the museum naturally minimises the dark and deserted areas of the Park.

Our goal is to create a museum, which acts as an extension of the city on one hand and as a connector to the surrounding park on the other. The museum connects with its monolithic building envelope and height to the surrounding city blocks of Dessau and with its materiality to the neighbouring vegetation of the park, respecting its speciﬁc natural conditions within the city. Its height adapts to the neighbouring building blocks to blend in with the urban fabric. With its alternating appearance and by adapting to events and happenings in the Park, the Museum has the capability to become a new source of inspiration for the City of Dessau.

The Park, its Seasons and the Museum
We see the new Bauhaus Museum as an addition to the qualities of the City Park. Therefore the design needs to be able to adapt to the park and react to the varying occupancy loads during different seasons throughout the year.

During the warmer months of the year, the Museum has to be an integrated element to the vitality on the Park. Visitors and Citizens of Dessau are streaming to the park, lying in the sun, going for a run, playing with kids or watching a concert. In our opinion, the New Bauhaus Museum needs to provide the possibility to become a connecting element with daily life in the Park.

During the winter months, a Park is usually an unoccupied island within the City Centre, disconnected with its surrounding. During those months, the Museum serves as an visible icon to attract visitors to its exhibitions and events and, at the same time, shrinking the mostly deserted landscape of the park.

The Museum, its Events and Exhibitions
The museum sits as a slender, horizontal structure in the park and combines all needed areas in one compact building envelope, providing a small footprint within the park. By nature, a museum is composed of two areas of different sentiment: The public areas, which should invite visitors, which is open and transparent to the outside and the exhibition spaces, an introvert entity, which is isolated from natural daylight to protect the artwork.

All public areas, featuring the lobbies, event spaces, a museum store and the cafe are situated on the lower levels of the museum in 2 cuboids with an rectangular footprint of 9x36 Meters and 7 m height. Each entity sits on a circular platform rotating around a stable core in its axis, where Staircases, Elevators and the Buildings Hardware like cables and (ﬂexible) pipes are located. The 2 ﬂexible entities are able to rotate around the cores to interact with the public life in the park and to adapt to the needs and the demands of its environment. A museum which is not deﬁned by its form, but by its performance. 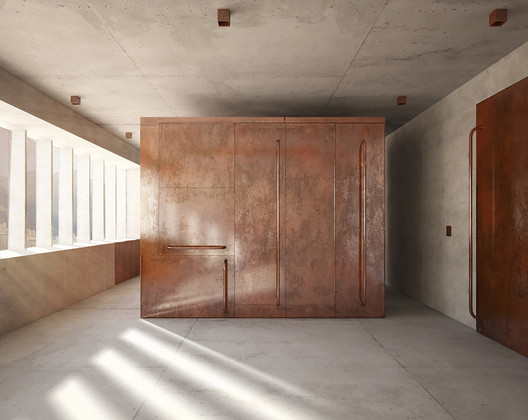