The Foundation Bauhaus Dessau has announced two winners in its competition to design the new Bauhaus museum. The winning teams of Gonzalez Hinz Zabala and Young & Ayata, from Barcelona and New York respectively, were selected from a total of 815 designs submitted after the competition was launched earlier this year. In its press release, the Foundation stated that both designs "continue the Bauhaus tradition, albeit from very differing approaches." With the new museum planned for completion in time for the Bauhaus' 100th anniversary in 2019, the Foundation has stated that they "will commence parallel negotiations with the two first award winners" in order to award the commission for the final design, with the intention of resolving the stalemate within the next three months.

The foundation also announced designs winning third and fourth place in the contest, as well as three designs awarded commendations. Read on to find out more about all seven designs.

Excerpt from the Jury's Assessment: The new Bauhaus Museum – an elongated bar running parallel to Kavalierstrasse – can be seen as an iconographic legacy – “less is more”. The glazed foyer level provides a link between urban city life and the City Park, inviting visitors into the museum.

Its specific setting within the city space continues inside: an easy-to-read, floating, black exhibition space, the definition of the black box.

The glass envelope cloaking the building defines both the reception area with its visitor services and temporary exhibition space and provides maximum curatorial freedom in terms of flexibility of use. It draws on the Bauhaus’s desire to be an “open school”...

This design is an excellent entry in terms of both the functionality and flexibility of the space, creating a museum building that is a tool for the expression of activity and productivity, creativity and social interaction.

Excerpt from the Jury's Assessment: The design adopts an organic, sculptural approach.

It takes the form of an open collection of structures, avoiding the impression of one isolated building. It is successfully integrated into the Park, making various references to the surrounding city. It is an independent structure that becomes a new reference point in a disparate urban environment.

The design approach has a certain suggestive force, radiates warmth and is highly distinctive, exerting an inviting fascination. References to various Bauhaus concepts are successfully combined to create a new, contemporary general approach. The hybrid character combining nature and culture extends the landscape into a three-dimensional figure...

This well-thought-out design works with repeated motifs using contemporary technological solutions and production approaches. The use of recycled materials and the approach to sustainability are innovative. The wooden construction stands on an elevated concrete slab. The outer skin is made of sintered glass mosaics depicting a variety of digitally generated patterns.

Excerpt from the Jury's Assessment: The two-storied polygonal structure opens up on all sides with dramatic and multifaceted references between interior and exterior and redefines the entrance to the municipal park. The result has a delicate appearance that integrates well into the green space and will not be perceived as a singled-out museum temple but as an open house for exchange and cultural encounters.

Excerpt from the Jury's Assessment: The design is characterized first and foremost by its polygonal and self-contained structural shell that sensitively addresses its urban design position. It shows a clear-cut edge towards Kavalierstrasse and a ramp forms a clear transition to Friedrichstrasse. All in all, the draft design convinces with its sculptural approach which demonstrates a strong commitment to the museum as a municipal building. 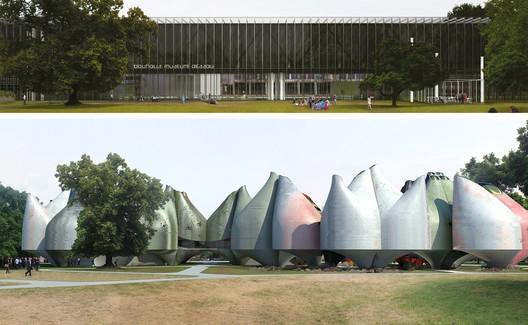