To minimize the building footprint, the building is extruded from its maximum height. The planned second phase is not an addition to the top of the original scheme, but rather a separate extension to the building’s south, consolidating similar programs and minimizing disruptions caused by construction. To maintain the existing walkways, the ground floor of the building remains mostly open and unobstructed, with the exception of its lobby and cafeteria. The auditorium, located on the lower floor of building can be reached both from inside and via an outdoor gathering space and public plaza accessible by the main campus route.

To avoid direct sunlight in the classrooms, the north façade of the building was rotated to be 45° to the main university plaza. The staff and faculty offices are concentrated along the western façade to maximize views to the sea and ventilate spaces with sea breezes. Every floor is rotated 4° from the floor below, shading each other. Balconies and the slight tilting of each exterior office wall further shade the building. A parametrically designed façade of louvers and perforated aluminum slats provides optimal visibility and light while reducing direct exposure to sunlight.

The design of the building relies on its internal atrium. Along with acting as a solar chimney to cool the building interior, the atrium contains the building’s vertical circulation, creating a social spine from which the narrative of the project arise. Simple geometric forms made of wooden slats further highlight the continuity of the atrium, while creating good acoustic conditions. 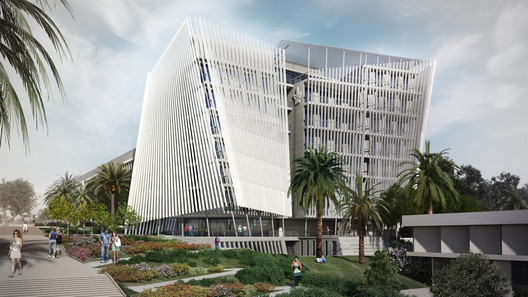