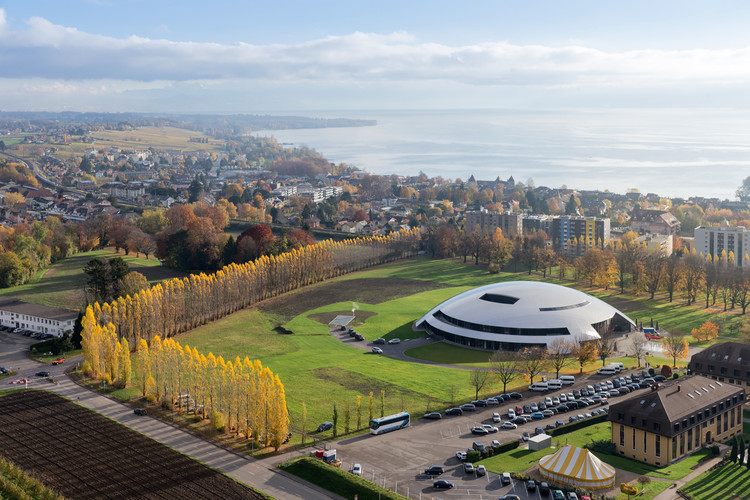 Text description provided by the architects. The new building infuses the campus with a contemporary architectural image while nevertheless maintaining the qualities that have made the school a revered institution. How can it remain sufficiently abstract to avoid being caught in a formal battle with the existing surroundings? A further question pertains to the program requirements—a concert hall, music conservatory, art studios, learning center, black-box theater, library, offices, guest rooms, and so on. Should you scatter them around the site or will you find a common denominator among them?

We felt the various aspects of the program should intersect in one single place, and proposed a low-lying, flat dome—a metal envelope that seems to emerge from out of the landscape, shining by day and reflecting ambient campus light by night.

From the air, the dome appears as a distinctive object, but at ground level its curvature fits into the landscape. In plan, its shape recalls a rose or rosette—a fitting allusion for Le Rosey.

The aim of the distribution of activities is clarity and legibility. On arrival, the visitor encounters the main concert or performance hall, the conference rooms, and the black- box theater. To the left are ground-floor educational spaces. To the right is access to the learning center and the restaurant, which also has an independent entrance located near its terrace. A series of side openings articulates the periphery. A forecourt to the main entrance and the concert hall is located along the west facade.

Figure-ground studies in plan and section show the role played by solids and voids, objects in space, or spaces within objects in Carnal Dome.

Located at the center of a semi-spherical void, a complex solid object contains four rectangular voids: the concert hall, black-box theater, music rehearsal room, and library. The void between the dome and this central object is a dynamic space of movement and fluent exchange. In contrast, the four voids inside the central object are intentionally static.

Materials played a role in conceptualizing the project: the most important part of the program, the concert hall, fits under the dome and is clad inside and outside in pressed chipboard wood (OSB) panels to contrast with the metal outer envelope. This double- envelope strategy also helps isolate the concert hall acoustically, so as to mitigate noise from nearby rail lines.

Each material is expressed and detailed specifically to reinforce the concept of the wooden box under a steel dome. Glass is present only as a vertical separation between exterior and interior or public and private and (in alternatively transparent or reflective forms) as a screen. 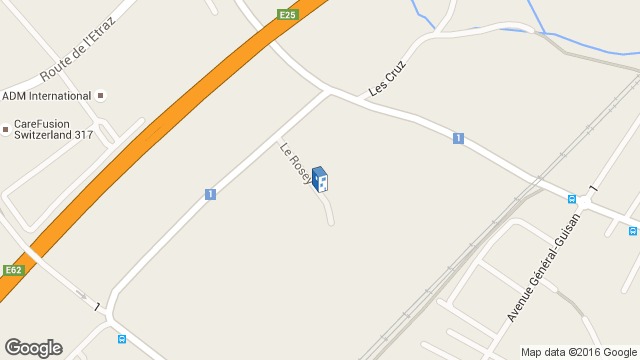 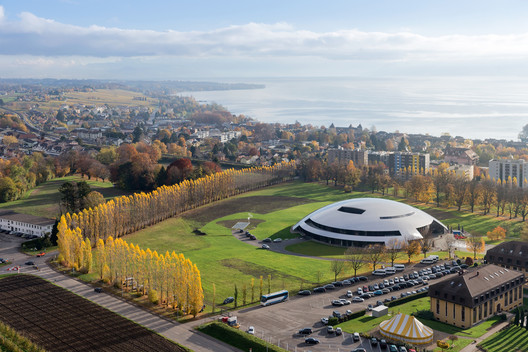