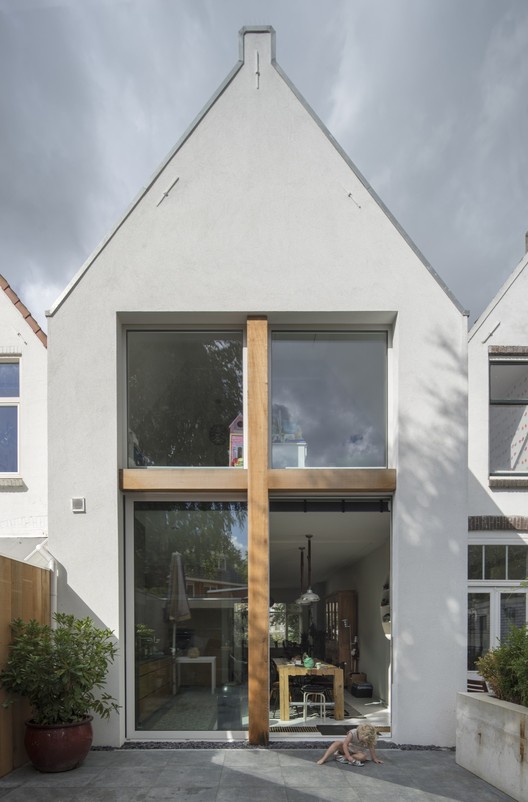 Text description provided by the architects. Our client asked us to design a one story extension on the back-façade of a 1900th housing complex. Just like the extensions of the neighbours. However we noticed that the lack of space was not on the ground floor, but it was on the first floor (the bedrooms). The sleeping rooms of the children date back to 1900. In one of the rooms there wasn’t even space for an average single bed.

That’s why we proposed to stretch the house completely by 2 meters. Just enough to make two average sized children bedrooms.

But the building regulations only permitted extensions on the ground floor not higher than 3 meters. We decided to write a letter to the Mayor and City Council Members, to convince them our plans were better for the future of the neighbourhood. And it worked!

The house is situated on the Delftweg in Rijswijk and is part of a row of six houses. The houses make a characteristic ensemble, dating from around 1900 in the (for that time) popular cottage style. In spite of some small changes, the front-facade of the ensemble is still pretty much in original state. The back-facade however is cluttered by small sheds and one story extensions on the ground floor. All different in form and materialisation.

By literally stretching the house by (just) 2 meters, we could make two average sized children's rooms on the first floor. And by doing that we created enough space on the ground floor to make a comfortable dinner room with kitchen.

We left the facade as it was, with its characteristic 1900th features. But instead of several small windows, we made one big window separated into four parts by a cross shaped wooden frame. Every part of the window opens a different living area: on the first floor the two sleeping rooms, on the ground floor the kitchen and the dinner room.