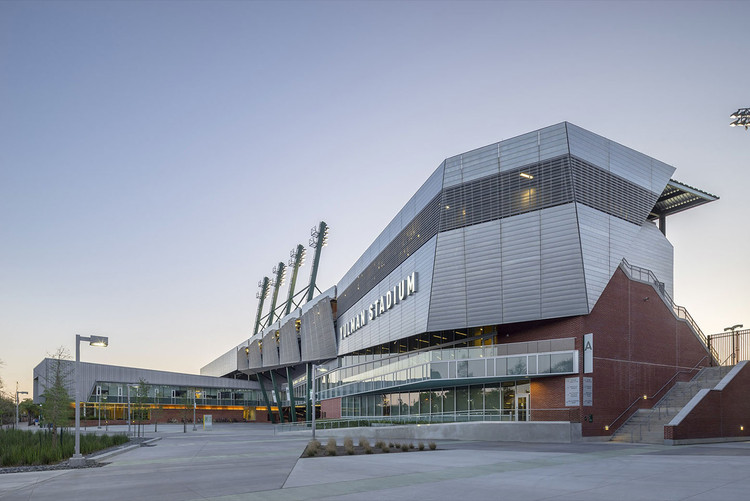 Text description provided by the architects. Tulane University, a landlocked, open space-challenged campus in the heart of Uptown New Orleans, wanted to build a 30,000-capacity football stadium on an exceptionally tight site – in fact, at the narrowest point on the campus. The new $72 million Yulman Stadium nests itself into the heart of the Tulane’s athletics precinct. It provides a backdrop to a new athletics quadrangle while connecting to the existing Hertz and Wilson Centers. Construction began in early 2013 and was completed in early 2015. The new stadium marks the first time in 40 years that football is being played on Tulane’s campus. It has become a catalyst for renewed interest in the Tulane football program, successfully bringing back a generation of lost fans.

Tulane’s alumni base is spread internationally. Each year thousands of former students and friends return to New Orleans and the school as casual visitors or participants in specific university activities. Athletic competitions, football games in particular, become great catalysts for this reconnection. Since the previous stadium was demolished in 1974, Tulane’s football team had played off-campus in the Superdome, a facility overscaled for the needs of a college football team and ill-suited to reinforcing team spirit. Moving from the 60,000-seat Superdome to the 30,000-seat Yulman Stadium gives Green Wave fans a more intimate environment to cheer on their team while also allowing for a tailgating experience. From the outset of the design process, the design team held true an underlying mantra, “Only at Tulane. Only in New Orleans.” The new stadium celebrates Tulane’s decorated athletic history and traditions using a modern architectural vocabulary that marries old and new.

The university and architects Gould Evans faced considerable challenges in placing the new building onto its site, not only because of the restricted space, but also because of concerns by the Audubon Boulevard and Calhoun Street corridors immediately adjacent to the facility. These neighbors led an effort to blockade development of the stadium, citing anticipated noise, light-pollution and scale of the stadium as potential pitfalls. The architects responded with a design that minimizes its visual and physical impact through clever manipulation – each of the stadium’s four sides responds to its immediate context, scaling up or down as appropriate. Sensitivity to contextual conditions also influenced design decisions relative to architectural massing and material expression. By keeping the seating bowl low along the west, and through the use of materials that closely relate to the residential nature of the area along with planting and screening elements, Gould Evans was able to integrate the stadium within the historic, low-scale fabric of the Uptown Residential District. 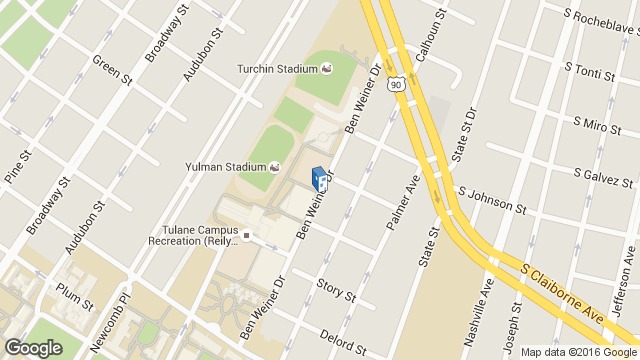 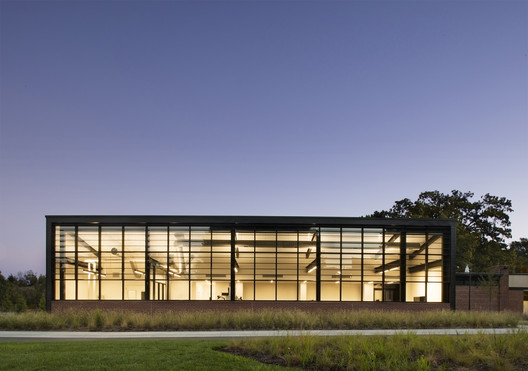 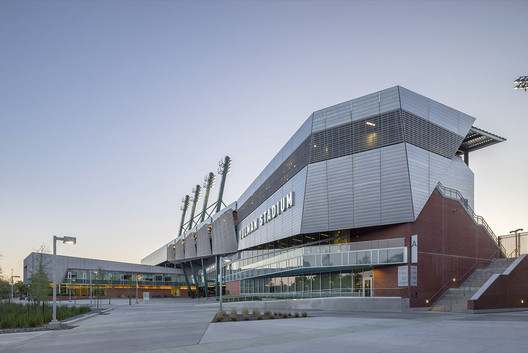