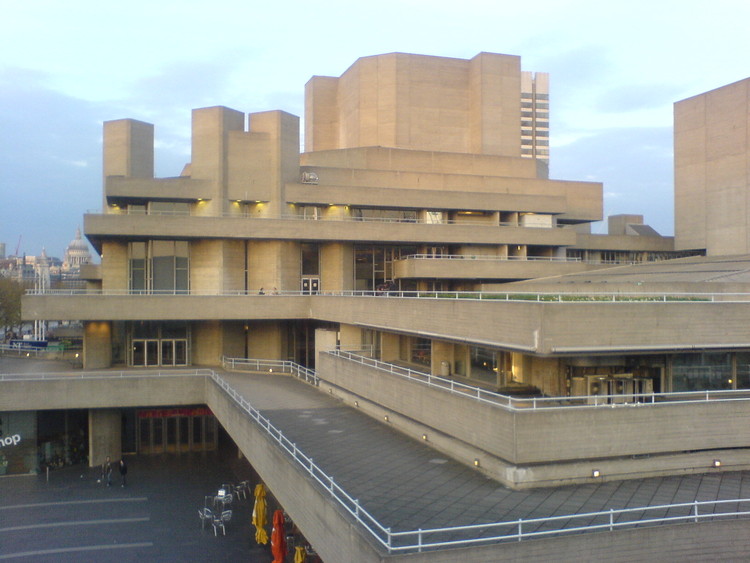 Prince Charles once described the structure as a “clever way of building a nuclear power station in the middle of London without anyone objecting.” Despite the criticisms and the thirteen years it took to realize, Denys Lasdun’s Royal National Theatre may be the most beloved Brutalist building in Britain, thanks to its generous public spaces, thoughtful massing, and respect for the surrounding city.

When it was completed in 1976, the National Theatre actually housed three separate theatre spaces: a so-called “Open Theatre,” a traditional proscenium theatre, and an experimental studio theatre. When Lasdun was hired for the project in 1963, the plan also called for an Opera House, with all four venues combined in a single complex along the Thames River, where the Jubilee Gardens are now located. However, in 1966 a new parliament eliminated funding for the Opera House component, and in 1967 the entire project moved to a new site downstream. The shift in location was pivotal in shaping the final form: at the new site Lasdun drew inspiration from the adjacent Waterloo Bridge, Somerset House across the river, and a view to St. Paul’s Cathedral in the distance.

Lasdun began his career at the height of the Modern movement, but his influences trended more towards Frank Lloyd Wright and Alvar Aalto than Le Corbusier and Mies, and even in his own time, he defied convenient labels. As William Curtis describes, “he remained aloof from the polemics of the ‘new brutalism’ (much discussed at the time), and diverged from the ‘anonymous functionalism,’ seen by some as the true way of modernism in Britain.”[1] Lasdun described architecture as “urban landscape,” and he “investigated ways of inserting modern buildings into the traditional city with due regard for the spirit of the place, but without resorting to historical pastiche.”[2]

Lasdun approached the design of the National Theatre by envisioning the public spaces as a kind of “fourth theatre” where the members of the public acted out their daily lives:

While designing the project, Lasdun kept on his wall a photograph of the Piazza San Marco in Venice, showing a ring of people crowding around an open-air performance. He called it ‘architecture before architecture’ and used it to remind himself that people create their own theatre simply by virtue of coming together in a public place to witness a dramatic act.[3] -William J. R. Curtis

The National Theatre exemplifies this concept of architecture as urban landscape through the use of varied massing that breaks down the volume of the complex. The exterior form of the of the building is dominated by the fly towers for the Open Theatre and the proscenium theatre. These two vertical features are connected by horizontal bands of outdoor terraces that stretch across the width of the site, which Lasdun referred to as “strata.” The horizontality is further reinforced through the dark shadows created by the deeply recessed glass facades at each level. The strata are only interrupted by two smaller sets of double towers that serve as vertical circulation, and as an indication of the main entrance.

The multifaceted fly tower for the Open Theatre, the taller of the two, is oriented 45 degrees from the orthogonal grid of the rest of the structure, in conversation with both the Waterloo Bridge to the west, and Somerset House across the river to the north. Lasdun was also careful to preserve views to St. Paul’s Cathedral from the expansive terraces. The twin sets of towers, marking the entrance to the building and the axis through the Open Theatre, reference an English Baroque device where twin towers were used to indicate an axis toward a focal point (St. Paul’s is also an example of this device).[4] Even the concrete itself is a reflection of the building’s place in London, with the color selected to echo the stone on Waterloo Bridge and Somerset House. In addition, the choice of wooden board formwork conveys an “archaic” feel.[5]

The formal language extends to the interior, where the terrace strata transform into theatre balconies. Even the board-form concrete extends to the interior of the theatres, where the textures are exaggerated to baffle sound. Development of the interior forms of the theatre spaces drove much of the design process for the building. From the outset of the project, Lasdun convened a series of meetings with a “Building Committee” made up of a wide range of experts, including the then-Director of the National Theatre, Laurence Olivier. Lasdun spent three years working with the Committee to determine their ideal form for the Open Theatre, guided by parameters such as minimizing the distance between the performers and the audience, and ensuring that no two members of the audience would be looking directly at each other across the stage.[6] The final result was a five-side semi-thrust stage, with audience seating arranged around three sides. And just as the exterior forms extend to the interior, interior experiences influence the external form. Concrete parapet walls on the terraces were kept low to preserve views of the river from inside the building, while taller metal railings provide safety.[7]

The building was not met with universal praise. Many critics saw it as a reflection of the past, both in style (due to the 1960s origins of the project), and in its social symbolism. Completed at time of national and economic uncertainty, some critics considered it an anachronistic temple to elite artistic pursuits. On the more practical side, critics also noted some confusion about the entry sequence, and the unwelcoming blank facades facing away from the river. But others praised the grand yet intimate spaces, and the sweeping views of the city. As Curtis describes, “The National Theatre managed to be big without loss of human scale, grand without being oppressive, formal without loss of conviviality.”[8] Accustomed to the typically cramped spaces in more historic London theatres, theatre-goers were especially receptive to the spacious terraces and lobbies. Non-theatre-goers are even rumored to have stopped in for a drink to enjoy the lobby spaces and the people watching.[9]

The intervening years have not always been kind to the National Theatre. Curtis reports a noticeable lack of general upkeep in his book on Lasdun, published in the 1990s. A renovation project expanded some interior spaces to the edges of the terraces, effectively eliminating the deep shadows originally intended.[10] Despite these challenges, the Historic Buildings and Monuments Commission for England gave the National Theatre building a Grade II heritage listing in 1994, only 18 years after it was completed.[11]

More recent efforts have helped bring the building into the 21st century, while maintaining its functional purpose. The skateboarders that have populated the National Theatre’s terraces and undercrofts were once seen as a sign of failed architecture, but a recent campaign to save the South Bank skate park has acknowledged it as one of London’s great public spaces.[12] A partnership with Philips Lighting replaced all of the exterior lighting with color-changing LEDs starting in 2007, to help activate the building at night, and add a splash of color. And a renovation by Haworth Tompkins, completed in early 2015, renovated the original studio theatre, reinvigorated the lobby spaces, and added a new structure in a style that complements, rather than copies, the original building, and allowing the National Theatre to continue to expand its work.

Lasdun was awarded the Royal Institute of British Architects Gold Medal in 1977, likely due in large part to the successful completion of the National Theatre.[13] But perhaps the greatest praise is that the National Theatre continues to be a vital part of London’s urban fabric, serving as a hub for activity and development in a revitalized South Bank, and it has been able to shift and adapt to changing times and changing needs without becoming unrecognizable. 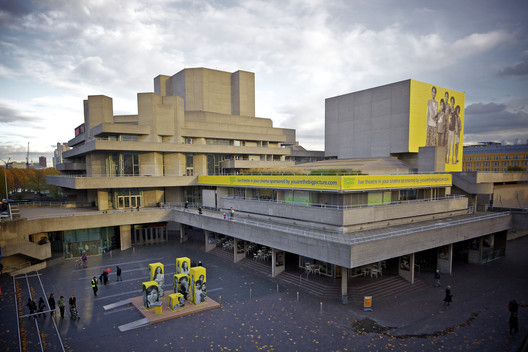