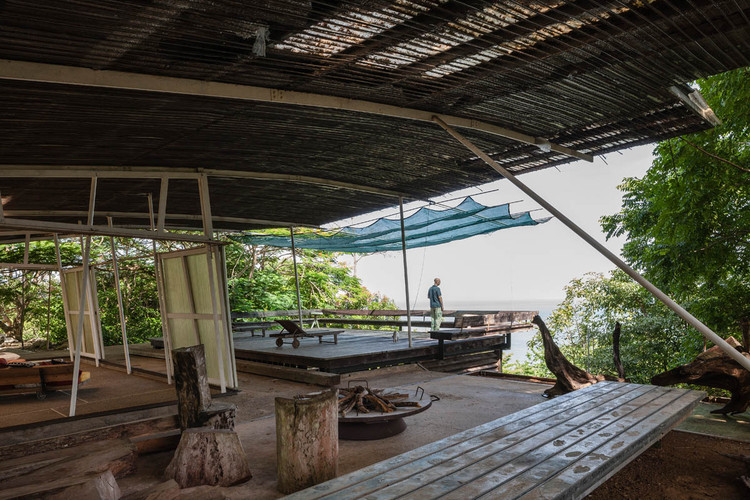 Text description provided by the architects. I used to live in Paris in a 6th floor walk up on the Rue Montmarte in Les Halles. It was four tiny rooms at the top of a rickety stair with two windows to the street and one to a courtyard and I couldn’t stretch my arms up without hitting the ceiling. For years it was heaven but as that illusion receded and it revealed itself to be more like a straightjacket than paradise I often found myself musing about living in a place with no walls, no windows, no restraints, no limits.

Years later, when Punta San Lorenzo (simply, SaLo, though I can’t help but think of Altazor when I go there) revealed itself to me one glorious orange and purple hued February afternoon, sitting out in the break at Santa Catalina, it suddenly occurred to me that I might find there what I had been longing for. And so it was. Although slash and burn farming had reduced the hilltop to a barren, scorched knob, it was bounded only be endless sky and ocean all around, with a fringe of forest that echoed with the hoots of curious howlers and a view south I swear almost all the way to the Galapagos.

Standing on that hilltop that first day it was clear to me that if we were going to try to live there we would need to recreate the devastated ecosystem, and with that in mind we set about constructing a structure made with salvaged materials that we hauled by truck, cayuco, raft, horseback and on our backs over muddy roads, down the Rio Grande, through mangroves, past Playa Banco and across the bay at Arrimadero to the top of the hill.  We built a roof to capture rainwater that fed an open air cistern and provided us with our domestic needs, trees and flowers were planted haphazardly and nature was allowed to take her course. She obliged with a spontaneous explosion of life- birds returned first, twittering in the eaves at dawn, then butterflies, frogs, snakes, iguanas, more howlers- even deer that had been hunted to near extinction found their way back.

Mimicking nature and as a response to her moods, we grew the shelter organically. When thunder, lightning and rainstorms came at us out of the south like a hallucination we grew the roof towards it to buffer the shock of the collision and slid translucent walls into place to keep out the rain, ensuring calm and the hope of salvation within the watery chaos. And when hot summer trade winds came at us relentlessly out of the north trying to blow the house off the hill the walls were drawn back and the roof, light like a kite, undulated like ocean waves or a big bird taking flight.

I set about building SaLo to recreate an ecosystem and to undertake an investigation into the nature of tropical architecture. Over the years I used it as a sort of laboratory where I could experiment with building types and materials and methods and perhaps come to some sort of conclusion about those things. But it turns out that the experiment is better left open ended and the only thing I can say with certainty is that SaLo has immeasurably heightened my appreciation of simple, infinite things like space and time, thereby allowing me a glimpse of what just may be- paradise.