Following the destruction of the city’s CBD in the 2011 earthquake, Qb Modular saw a need for spaces that brought Christchurch’s dislocated small and medium businesses together under one roof in an atmosphere that was more village than office complex.

“We wanted to create a mixed-used multi tenanted venue that was flexible and functional but, above all, alive” says Alex Brennan co-founder of Qb Modular. “We saw an opportunity to create a vibrant and engaging space where companies share of resources and facilities, while still having their own office space for quiet, focused work.”

Qb Studios opened its doors in December and is home to a varied array of businesses, from architects and designers, to technology companies and property developers. Comprising more than 1000m2 of total floor area, including eleven high-spec offices ranging in size from 36m2 to 90m2, the space doubles as an public art gallery where large, glass light-boxes showcase work from emerging and established talent. “The circulation of new art brings real freshness to the space, through the works themselves of course but also by bringing the wider community through” says Michael Fisher, a co-founder of Qb Modular.

The floor plan was deliberately designed to promote interaction and collaboration between occupants with shared spaces for planned and spontaneous meetings. The internal structures are arranged into two, double-story wings that frame a bright, high-stud, atrium where tenants and the public can rub shoulders and swap ideas over a coffee from the resident espresso bar, which is open to the public. With its copper ambient lighting it resembles a kind of secret city alleyway; a nod to the old “laneways” that pre-earthquake Christchurch was well known for. The atrium area can happily function as an auditorium in the evenings for talks, events and gallery launches.

The result is a coherent blend of steel, glass and lightweight concrete with a strong, but modern industrial visual. A neutral black and grey palette is softened with bright splashes of colour from new and restored mid-century furniture pieces. Additional pieces, such as the steel and New Zealand remu high top table, were designed by Qb Modular using repurposed structural steel from the prefabricated building system. 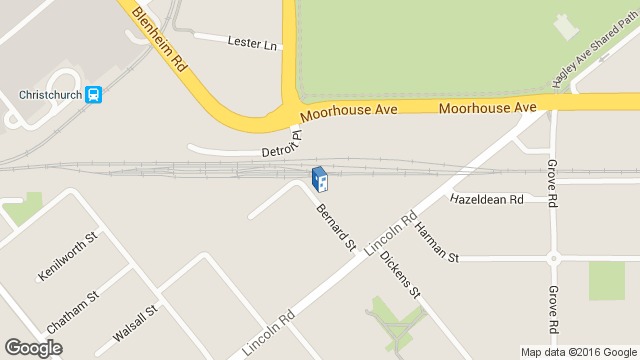 Location to be used only as a reference. It could indicate city/country but not exact address.
Share
Or
Copy
About this office
Qb Modular
Office
•••