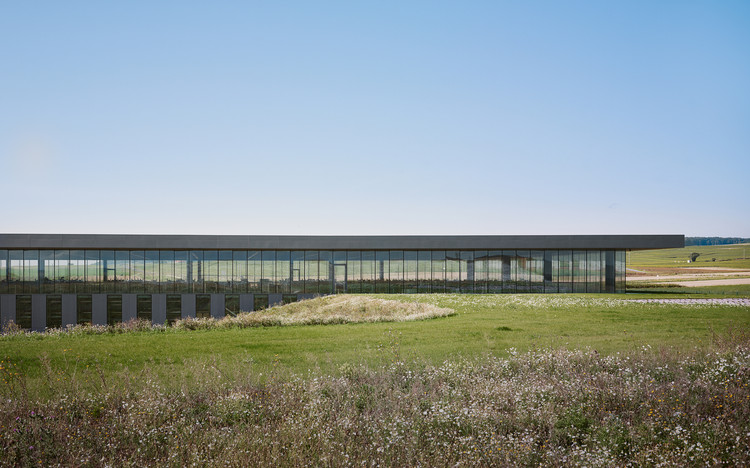 Text description provided by the architects. Moët & Chandon, the world’s famous champagne house, is today present in more than 120 countries. With production growing year after year, it was necessary to expand capacity. Moët & Chandon’s goals are to win supply contracts and increase production and storage capacity.

The chosen site is Oiry, a few miles from Épernay. It has the distinctive feature of being visible from the Château de Saran, Moët & Chandon’s prestigious house reserved for its VIP guests. The new site is called ‘Montaigu’, the name of the hillside just opposite on which perches the ‘Loge Montaigu’.

The Fermentation Room is the first stage in a large-scale industrial project which includes, in addition, a tirage building, cellars for aging, a disgorging building, a labelling building and reception areas. Work on the second stage is already under way and the whole site is scheduled for completion at the end of 2015.

The requirements of the contracting authority

The requirements specified by the brand covered various aspects:

Architecture: Blending in with a magnificent site.

Technical: A Fermentation Room free of any construction constraints.

Economic: Approaching each stage as if it were the last.

a. Seeing the vats:

Seeing the vats required having a large glazed surface. For us, this was a paradoxical idea which contrasted with our initial image of a place where wine matured. But since the vats are opaque and individually temperature-controlled, this does not pose a problem.

Once Moët & Chandon approved the concept, all we had to do was come up with the means to make it possible. Comfortable working conditions for staff in this monumental space of 66 000 m3 under beams are ensured by a temperature which varies between 12°C and 19°C.

The transparency of the walls is obtained by means of structural silicone glazing 1.50 m wide by 4.50 m high. We used extra-clear glass which has to be specially made, because we didn’t want the glass to take on a green colouring from the overlapping thicknesses seen in perspective, as we had stiffeners also made of glass.

b. Blending in with a magnificent site:

Moët & Chandon is mindful of and attentive to the quality of this unique landscape, which is soon to become a UNESCO World Heritage site. It is not a new factory in the landscape, but a building which interacts with its surroundings through its transparency and its clearly visible lines of composition.

We worked on the view of the site from the Château de Saran.

The Fermentation Room is a continuation of the flowing lines of the vine-covered hillsides which slope down from the Château de Saran. This inclined plane at human height offers a welcoming perspective. This layout has enabled us to make the panorama of the landscape the most important element of our project composition. The earthmoving is defined and sized in order to set the Fermentation Room off against the various possible views. The maximum height of the embankments is aligned with the ground floor, i.e. approximately 3 m above ground level. This has the effect of making it appear as though the roof of the Fermentation Room is floating, so as to free up the view over the landscape.

Working for the region’s most prestigious champagne house gives meaning to one’s work. Working in a high-quality space worthy of that house means, in a sense, receiving ongoing recognition for that work. On the Fermentation Room’s lower level, beneath walkways, all the workspaces are naturally lit. On the upper level, from the walkways on the ground floor, we enjoy a panoramic view of the landscape.

d. A Fermentation Room free of any construction constraints:

At the outset, we imagined a free area of 6 000 m2, because we didn’t want constraints on where to position the vats. The idea then became a conceptual and aesthetic desire. The structural calculations did the rest: 16 peripheral columns (each 15 m apart) supporting a mesh of beams with inertia varying from 1 m to 2.5 m. The Fermentation Room is set on one level 11 metres under beams, of 6 000 m2 surface area, with no intermediate column within 50 m over a length of 120 m. The glazed area is 4.50 m high. The cantilevered part is also 4.50 m high. The height of the entablature is 1.25 cm. The frame is defined by a step of 1.50 m which corresponds to the rhythms of the glazing, railings, floor covering, ceiling lighting, etc.

e. Approaching each stage as if it were the last:

We drew up a master plan which was sufficiently versatile and flexible to allow staggering of the different parts of the overall schedule. The initial idea was for each part of the plan to be clearly separated in order to have a finished building at each stage. From the Château de Saran and from the site in general, we wanted to give each stage its own, finished look.

The Fermentation Room is the first of the pieces which make up the overall chessboard of the site: tirage, cellars, disgorging and labelling. If the project ever had to be stopped at this point, the Fermentation Room would be self-standing, with a finished design that blended in flawlessly with the site at the current stage of delivery.

We took advantage of the requirements of the 6 000 m2 with no load-bearing points and the desire for the vats to be visible, to give this project impressive force. That force turns the Fermentation Room into an extraordinary place, like a majestic nave, entirely open onto the landscape. We have built a timeless structure, marked by a strong reference to Miesian architecture, following classical rules which we have abided by closely: the cornerstone which is the modified landscape, the body which is an empty space for man and the entablature interacting with the sky, where the structure is expressed allowing the horizon to appear. 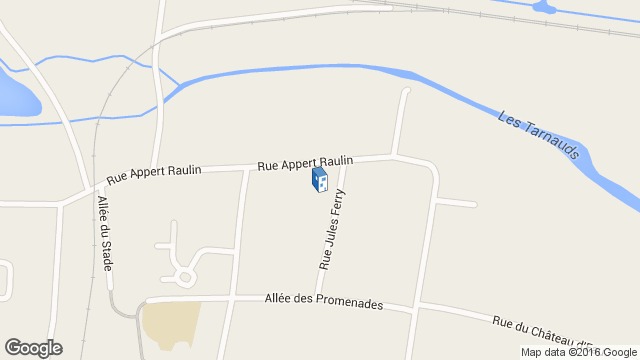 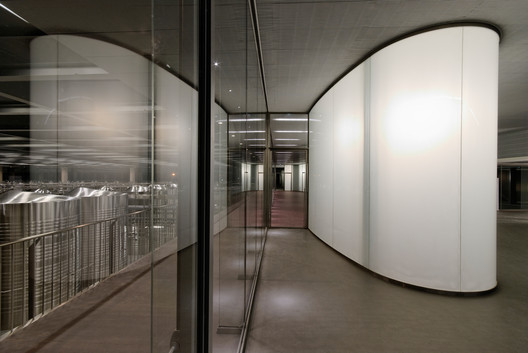 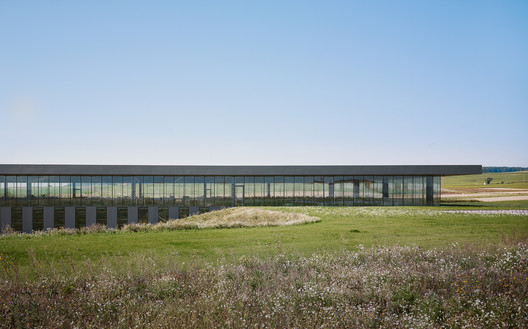