Update: On September 1st, the Japan Sport Council launched a new competition to find another design for Japan’s New National Stadium - this time for a design and build project with more stringent cost restrictions. Today, contractor Nikken Sekkei and Zaha Hadid Architects have confirmed that they will be re-entering the contest together, bringing forward work from their original design. “Our firm is certain that retaining the team of Design Supervisor and designers will deliver the best National Stadium, and we have invited Zaha Hadid Architects to join the design team” said Nikken Sekkei in a statement. “Applying this knowledge and experience of the project, this team can further develop the design to the new brief as a cost-effective proposal to realize the world’s best National Stadium.” The article below was originally published on August 26th.

In mid-July, Japanese prime minister Shinzo Abe declared that ZHA's design for a New National stadium would not be completed and that plans for the Tokyo Olympics-Paralympics stadium would "start from zero." In response Zaha Hadid Architects has just issued a press release and a link to a 23-minute video presentation. The video, ZHA explains, "outline[s] in detail the unique design for the New National Stadium which has been developed over two years to be the most compact and efficient stadium for this very special location in Tokyo. Zaha Hadid Architects welcomes a new contractor bidding process for the New National Stadium to reduce costs and ensure value for money in terms of quality, durability and long-term sustainability."

Watch the video - or if you haven't got 23 minutes, read our synopsis - after the break. 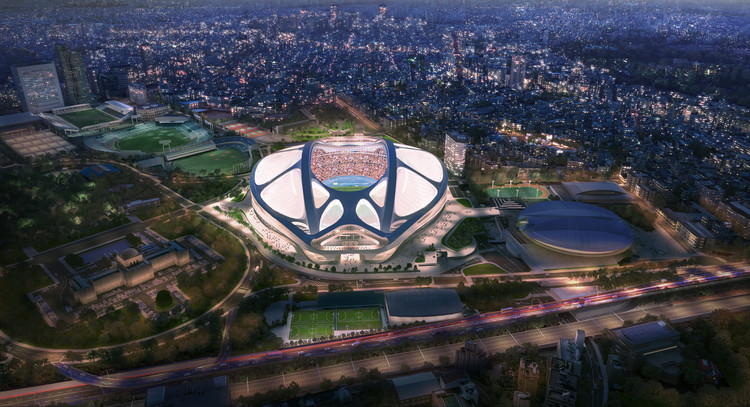 The video begins by reiterating ZHA's belief, outlined in their initial statement after their design was scrapped, that starting the design from scratch is "an unecessary risk which we think the government should reconsider if its aim is to achieve a lower price than ¥252 billion." As evidence that their design can be delivered at a low cost, they stress the experience of the design team, explaining ZHA's record of delivering projects on time and on budget, and also mentioning the extensive sports design experience of Arup, the stadium's sports architect.

The video moves on to explain and defend ZHA's design of the stadium, stating that it was "inspired by the past and future of Japan":

"Together the arches, catenary beams and lightweight fabric combine to create an overall effect that represents the traditional craft and modernist innovation of Japan, so that it creates a renewal of the Japanese spirit of optimism for the future, based on their confidence of their past."

Also addressed by the video are the concerns over the size of the stadium, arguing that their design is as compact as possible give the requirements of the brief. "We have been aware since our competition submission in 2012 of the sensitivity of the site location with respect to the size of the stadium," explains the narrator, adding that this was the reason for choosing a saddle-shaped seating bowl, which rises from 24 meters high at the ends of the stadium to 44 meters high in the middle. This will, supposedly, reduce the apparent size of the stadium from many surrounding viewpoints. The saddle shape also enables the incorporation of the "Sky Bridge", which circumnavigates the top of the seating bowl and provides views of the city. It was intended as a "gift" to the public realm.

The narrator also stresses that the current design is based on the functional requirements of Olympic Stadiums and the desire to create a stadium that leaves a suitable legacy for the city. For example, lighting suitable for HD broadcasting is required, meaning that the roof must rise to a height of 50 meters. The stadium is also configured with adjustable seating and a retractable roof, allowing it to be adapted for its post-Olympics life hosting football matches and concerts, as well as athletics competitions.

The roof, they say, must also account for the hot and humid climate of Tokyo in the summer, providing as much shade as possible for the spectators - including when it is adapted for football - and must therefore extend well over the interior of the stadium to provide shade even for the more compact football seating configuration.

The narrator also argues that the level complexity of the site, height restrictions, and requirement for level access means that "there are very few design options available." Having investigated and researched for two years, they are confident their design is the "most feasible long-term solution."

The video is careful to outline that the requirements for the design were not purely optional functional extras, but were critical to the design's long-term viability. For example, the need for adjustable seating arrangements is necessitated by the plan to secure revenue from stakeholders such as the Japanese football league, explaining:

"If football is watched from the distance of an athletic seating arrangement, it is too far away to create atmosphere and it will not be popular. An athletics formatted bowl is not acceptable to FIFA and will not be acceptable to J-League for national football events."

The design of the stadium's interior amenities is also justified, arguing that in order to ensure financial viability, more dining facilities within short travel distances are required to increase duration of stay and spending of the spectators.

In addition, the video elaborates on the criticisms of the Japanese construction tender system, first made by ZHA in their initial statement:

"A new process to find a contractor will result in the same limited number of Japanese bidders that competed for the project last year... There is limited competition available, and this is the underlining issue to be tackled. We think the new process should concentrate on achieving competitive bids, based on the existing design, with the option to provide cost savings to achieve the project on time and on budget."

The video also reveals that when the original cost estimate of ¥252 billion was made by the contractor, they failed to include a number of key design elements in their estimate - most notably the adjustable seating arrangement and the retractable roof. They also argue that the structural design of the stadium - with longitudinal arches to support the roof separately from the seating bowl - allows for time saving by constructing the roof and the seating simultaneously, an opportunity that the contractor's tender did not take advantage of.

The narrator therefore argues that "a new process needs to change the market conditions in Tokyo, not the design."

Despite leveling all this blame upon the Japanese construction market, the video nonetheless suggests that "the current design can be redesigned to achieve a lower budget, but it should be retained in principal so that the Japanese public achieve this value from the market and they get a long-term return on the investment." Suggested cost savings include omitting air conditioning for the seating or omitting the sky bridge.

See our previous coverage of the Tokyo 2020 Oympics here.

Correction update: A previous version of this article referred to Arup as the stadium's engineer. This has been corrected to their proper title of "sports architect."