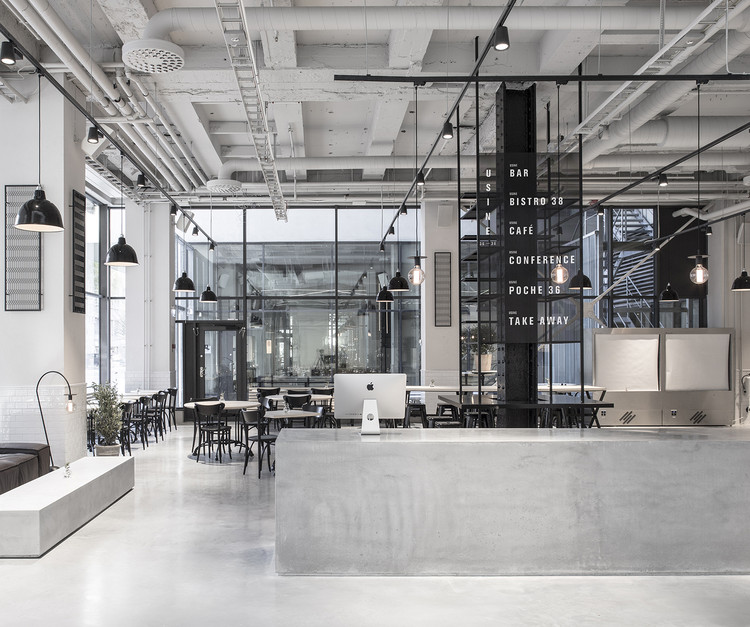 Text description provided by the architects. A 2000 square meter former sausage factory in the heart of Stockholm’s lively Södermalm neighborhood has undergone an extensive renovation to give place to the new Usine concept, created by internationally renowned designer Richard Lindvall, previously known for the restaurants Museet and WIN awarded restaurant Nazdrowje.

The new space, which opened its doors at the end of April 2015, includes Restaurant Bistro 38, Bar Poche 36, café, take-away, reception and conference spaces. Richard Lindvall has developed the overall concept in close collaboration with the owners and restaurateurs Tim Karlsson and Michael Andreasson, previously coming from celebrated Stockholm restaurants Franska Matsalen, Pontus in the Greenhouse and most recently Museet. Before the one year long renovations, the premises were used by the Swedish Tax Agency and consisted of a maze of tiny meeting rooms with a ceiling height of 240 cm. The entire bottom floor of the building was completely stripped down, and no trace of the old bureaucrats can now be seen in the new restaurant.

While the menu focuses on modern French cuisine, the interiors are more inspired by Scandinavian minimalism with an industrial twist. Lindvall says he took inspiration from hotels and restaurants in Shanghai, New York and Amsterdam. “Big impressive buildings with lots of space and hard materials, but which are still keeping a welcoming atmosphere are very rare in Sweden, so I went abroad for inspiration on how to achieve this feeling. I was a bit afraid of making it too cold, it was important to create a warmth in the environments, but still keep it raw and fresh.”

- I am especially pleased with the boards on the walls, says Lindvall, made from expanded metal that I found in Germany, cut into smaller segments and placed in black lacquered steel frames, which gives a hint of Art Deco style. Many interior details were found from auctions, and I have been searching online for unique materials and objects that have not been seen before, like the pendants we imported from China, and the French oyster baskets holding the menus. I designed the tables and sofas and had them made by a carpenter in Lithuania, sending material samples back and fourth until we found the perfect finish. The big fig tree at the entrance was a special request that I ordered from Ulriksdals Trädgårdar and chose mainly for the amazing gray bark. The tree is in full bloom now, so the trunk isn’t that visible, giving a very different expression than in the winter when it is all bare and minimalist. Usine has been described as “a restaurant that could have been in New York or any other big international city, where one has created a Scandinavian feeling, but nothing like this has ever been done in Sweden before”.

Materials of high quality were selected to last time. Maple wood custom millwork and cognac leather upholstery accompanied with concrete, galvanized steel, white tiles and black iron details create a stylish but relaxed atmosphere. To introduce an accent color, Valcromat in orange and brown was used for table tops, side tables, cabinet doors and menus. 48 tons of concrete was poured into the construction, not only for for the floors, but also to construct the two bars, reception desk, a large sofa table and a 3,5 meter wash basin in the rest room. The large space is divided into three rooms, all revolving around a central black iron beam structure that has been designed to serve unique functions for each area.

The center of Bistro 38 holds a long two-level sofa where one side faces the massive concrete bar and the other, lower part is turned towards the dining area furnished with an elegant mix of French bistro chairs and tables in marble and white pigmented maple with black cast iron bases, custom designed by Richard Lindvall for the restaurant.

In Poche 36, the central iron beam has been transformed into a flexible table that can serve both as seating and as service station for the staff. The bar is accentuated by expanded metal painted in the same light gray hue that has been used for walls and ceilings throughout the entire premises; Farrow & Ball’s Ammonite. In the café area the main iron feature was turned into a high shelf structure with bar seating around the base. Along one side is a 5,5 meter long reception desk in concrete (used for visitors to the companies inhabiting the upper floors of the building), lifted an inch from the floors to give a lighter expression.

Large scale photo prints grace the walls in Bistro 38, shot in Shanghai in a collaboration between Lindvall and photographer Johan Annerfelt. “The man in the image first meeting the guests, was a cook at restaurant Shintori, whom we just snapped in the entrance on our way out.”

Connecting the three areas is a spacious corridor serving as a gallery, curated by Dennis Blomberg from Noll Images, with new exhibitions coming up continuously. For Usine’s graphic profile, Lindvall called in Serhat Ferhat from Studio Dare, who created the clean typographic concept applied to everything from menus, plates and coasters to the large windows. 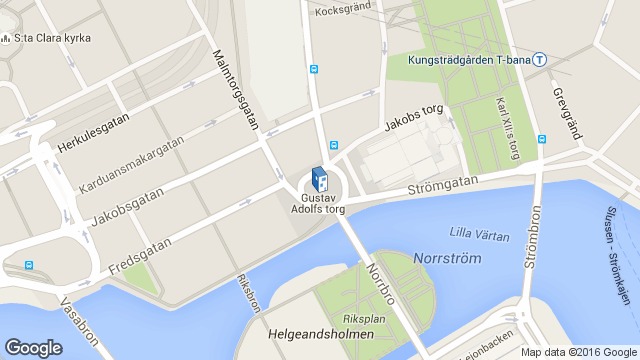 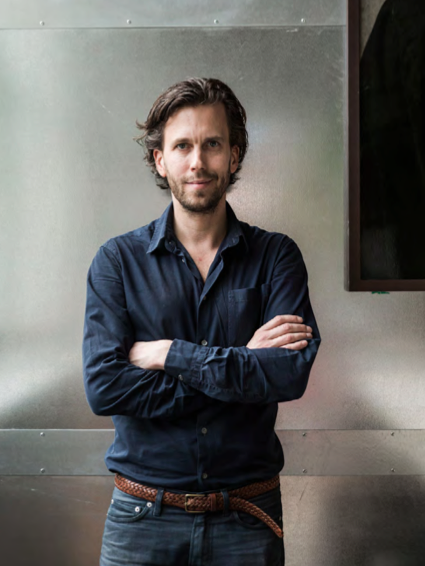