Zaha Hadid Architects has been announced as winner of the Danjiang Bridge International Competition in Taiwan. The new bridge was designed to "make a conspicuous landmark against the backdrop of Tamsui's famous sunset," says ZHA director Patrik Schumacher. It will be comprised of a cable-stayed bridge design that will minimize its "visual impact" by needing only one concrete structural mass to support its 920-meter-long span.

"The Danjiang Bridge will be the world’s longest single-tower, asymmetric cable-stayed bridge," said ZHA in a press release. Read on to see how the bridge will be constructed.

"The mast is designed and engineered to be as slender as possible and positioned to offer the best structural performance, avoid impeding the navigability of the river and also minimize any interference with the views of the sunset from popular viewing points along the river. This single-mast design also minimizes structural elements in the riverbed in accordance with the increased protection programs of the estuary’s ecosystems," added ZHA.

The Danijang Bridge is a collaboration with Leonhardt, Andrä und Partner and Sinotech Engineering Consultants. It will connect Highways 2 and 15 with the West Coast Expressway (Route 61) and Bali-Xindian Expressway (Route 64) over the mouth of the Tamsui River, adjacent to the Taiwan Straight.

An extension to the Danhai Light Rail Transportation (DHLRT) system and a pedestrian deck have also been integrated into the design. This will allow the bridge to maximize accessibility and relieve congestion throughout the area, which includes the region's busiest shipping port - the Port of Taipei/Taipei Harbour. 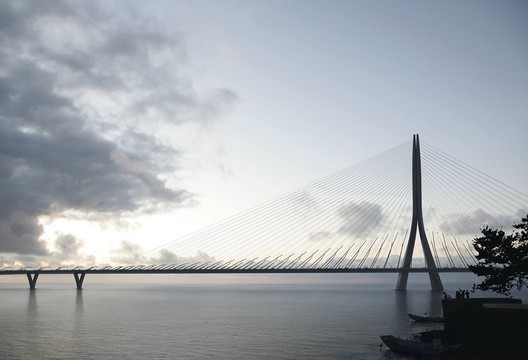