Save
House B / Unostudio Architetti associati 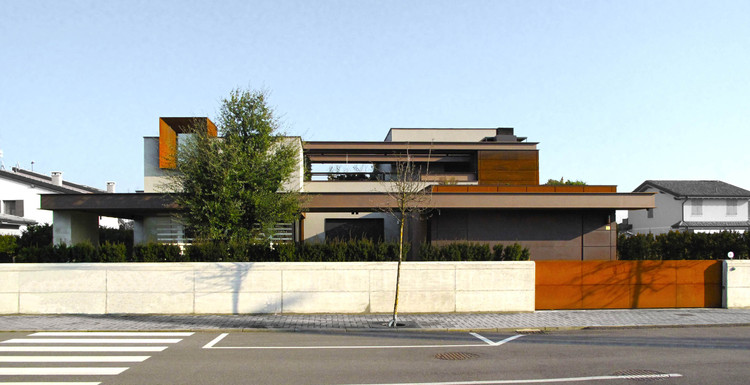 Text description provided by the architects. The decision to build a home, the idea of creating one’s own domestic experience in ways that are different from those of living in collective accommodations or in urban settings, generates a set of aspirations, suggestions, needs. Our task is to translate these instances into a project that, at least in part, would summarize them. The aspiration and the goal is to improve our daily lives, increasing comfort and the quality of space.

The most difficult part of the process is when, as in this case, the place is a lot of alienating land surrounded by buildings that are simply ugly, that are neither part of the tradition nor of a thought-through present. It is impossible, therefore, to find interesting relationships with a context devoid of identity, on which to build an idea.

The risk one can run is to think of a self-referential object that finds its reason of being in the beautiful sign, without answering to those instances of quality of life that underlie the very choice of building a house.

From these reflections, a project has been developed, a project that finds within itself a reconstructed nature, with which one can establish those relationships denied by a disarming urban context. A choice of self-sufficiency, which has its roots in the Roman house and that puts will at the center of the project, along with research, the need for quality of life in connection with an idea of ​​nature.

The result is a dilated project that widens in order to internally generate the voids that are to be invented to replace an absent place.

Our choice is to provide the roof of the building with functions that are normally placed on the ground. So, the roof is seen as a garden, with relational spaces organized in separate areas: one devoted to the swimming pool and the sunroof, and one devoted to food and conviviality. Among these areas in the central atrium, there is the place for a strawberry tree whose foliage dominates the void at the center of the project.

The attics of the high sections completely hide the renewable energy production plants. Each space, thus, is occupied by a sequence which, from the entrance, follows a vertical path. The entire tale is designed to slowly discover the mechanics of the spaces that follow the alternation of external and internal. What can be distinguished from the outside can only be fully comprehended by following the light that, by entering, reveals the empty spaces, in a crescendo that culminates with the light coming from the corten lantern in the front facade.

The spatial succession of the Roman house is vertically translated, in an organism that, as in the tradition, places the impluvium at the center of the composition. The kitchen and the living room overlook a garden built inside the building itself, with maples, convallaria and a stream of running water, a real natural enclosure, a precious garden, the setting of contemporary daily lives.

The materials describe the gaps that the project generates. In this way, wood, stone, corten, water and vegetation give voice to the need to relate to spaces designed as an extension of the house itself. The main structure, in masonry and concrete, delineates the volumes, while steel builds the gaps and crowns the construction, measuring and uniting the composition. All the floors and wall coverings, both interior and exterior, are in natural stone, with the exception of the wood chosen for the flooring of the terraces and of the sunroof.

The technical and technological contents of the building, which reaches energy class A +, are geared towards sustainable choices. 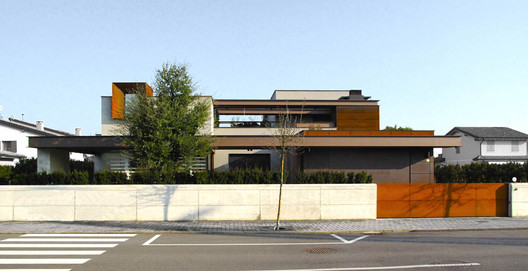