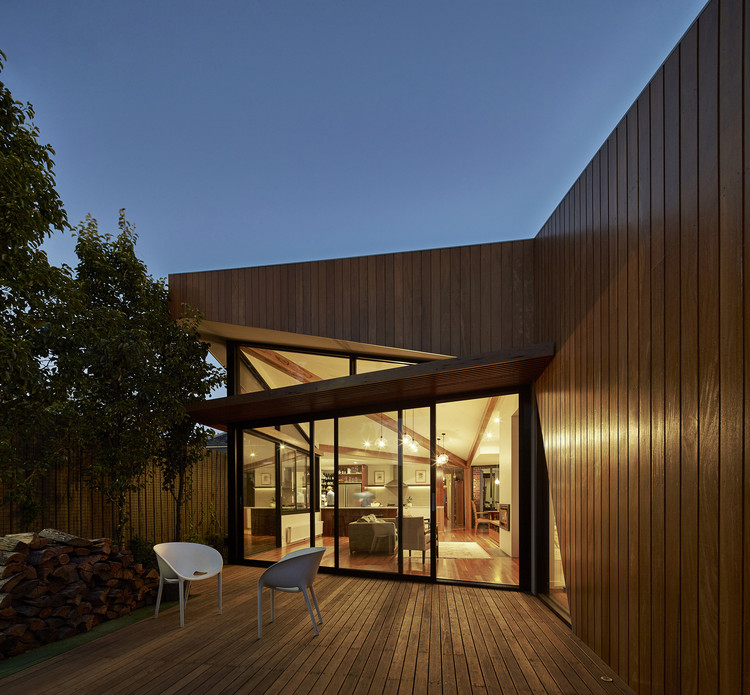 Text description provided by the architects. This was a lucky site. An access lane along one boundary, the treed grounds of a school along another, ensured that the rear northern outlook, which lay diagonally across the site, would be preserved from any future redevelopment. In an inner urban setting, it is not always wise to rely on aspect when conceiving of a design. In this case it made sense to embrace it.

A poorly constructed addition closed off the existing dwelling from this rear amenity. Even with this removed, it was clear that the remaining Victorian architecture - street oriented, with envelope and interiority tightly clasped together -was not well disposed to take advantage of the site’s good fortune. The design approach was to loosen these relationships, so that the qualities of the exterior could draw alongside those of the interior.

Seen in plan, the diagonal house’s singular gesture is a rhomboid volume, a kind of spatial easement that subdivides the site, creating courtyards on either side of the dining and living space. With its northern edge pulled upwards and its southern downwards, viewline and sunlight are drawn through the house on this diagonal axis, to the extent that afternoon winter sun extends all the way through the house, crossing the courtyard, to the edge of the existing master bedroom. This plan works equally well in summer, when cross ventilation from the southern courtyard to the north draws air across a pond, passively cooling the interior.

This breeziness, both spatial and sensory, is experienced from the functional and personal spaces located at the periphery. The study, kitchen/pantry, bathroom and bedrooms are tightly composed -like extensions or fragments of the Victorian house plan.  In opposition to the dynamic space at its centre, the views from these rooms are aligned towards the more intimate spaces at the edges of the site.

In this way, aspects of the existing dwelling are reinterpreted in the new and used to provide different kinds of space over a small area. This allows the substantial brief of a young family of 5 to be accommodated without a large footprint.

Such shifts are also played out in materiality. The Blackbutt flooring of the existing house is extended to the edge of the kitchen, where it meets ironbark extending inwards from the courtyard deck. This is a critical moment, of existing and new, where high points are connected to low and the edges of the rhomboid are joined to the peripheral spaces. Lined in blackbutt it is also the primary structural frame, requiring close integration of design, structural engineering and the builder’s excellent carpentry skills.

From a cost and sustainability point of view, a smaller dwelling is always preferred to a large, and reuse preferred to new building. Through this addition, amenity and flexibility has been provided within an overall footprint of similar size to what we started with. It has done so by bringing spaces of the site and its climate to those of the interior. What we added was always there.