Save
Alejandro Aravena Appointed Director of the 2016 Venice Architecture Biennale
Presented by:

Today, in Venice, the Board of la Biennale di Venezia named Chilean architect and Pritzker jury member Alejandro Aravena as the Director of the 15th International Architecture Exhibition. Held bi-annually in the capital city of Italy's Veneto region, the 2016 edition of the Biennale will take place from May 28 - November 27, 2016.

Citing the increasing popularity and success of the previous Architecture Biennales, chairman Paolo Baratta confirmed, "after many years in which the Architecture Biennale has continued to grow, we may now consolidate the decision to make it last six months, given the steady increment in the attendance of architecture schools from all over the world who come to participate in the Biennale Sessions project, and have made the Architecture Biennale a pilgrimage destination for students and teachers from the universities of many countries, from the United States to China.”

“There are several battles that need to be won and several frontiers that need to be expanded in order to improve the quality of the built environment and consequently people’s quality of life. This is what we would like people to come and see at the 15th International Architecture Exhibition: success stories worth to be told and exemplary cases worth to be shared where architecture did, is and will make a difference in those battles and frontiers.”

“The 15th International Architecture Exhibition will be about focusing and learning from architectures that through intelligence, intuition or both of them at the same time, are able to escape the status quo. We would like to present cases that, despite the difficulties, instead of resignation or bitterness, propose and do something. We would like to show that in the permanent debate about the quality of the built environment, there is not only need but also room for action.”

Chairman Paolo Baratta further explained the board's decision, stating, “After the important experimental Biennale developed by Rem Koolhaas, dedicated entirely to the curator’s research, it is our belief that we must follow up with a Biennale that convenes the architects, and is dedicated to the exploration of the new frontier that demonstrate the vitality of architecture, a frontier that spans across various parts of the world and shows architecture engaged in providing specific responses to specific demands. This Biennale intends to react once again to the gap between architecture and civil society, which in recent decades has transformed architecture into spectacle on the one hand, yet made it dispensable on the other. Among architects of the new generation, Alejandro Aravena is, in our opinion, the one who can best describe this reality and highlight its vitality.”

Alejandro Aravena is one of the founders of ELEMENTAL, an architecture firm based in Santiago, Chile. 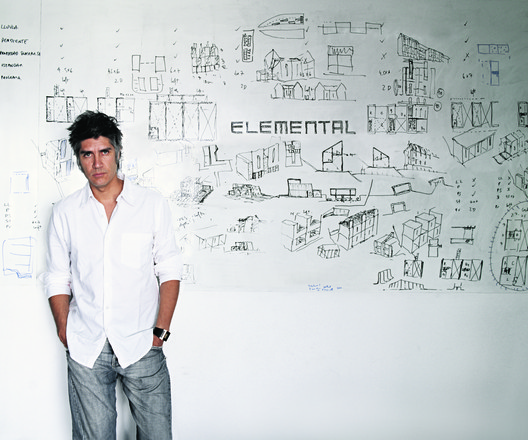