Mophosis Architects have just released their design for the Casablanca Finance City tower in Morocco. The building's iconic crown, coupled with the way the building interacts with ground-level public space, creates an "inverted double-crown" that will serve as social symbol and meeting place. Following the model set in Paris' La Defense district, the project will anchor a new business district (Casablanca Finance City) and embody "Morocco’s vision for the future and setting precedents in building performance, scale, and style for a city that does not yet exist." Slated for completion in 2017, the 226,042 sq. ft building broke ground in December of 2014.

Read on to learn more about Morphosis' brise-soleil-wrapped tower. 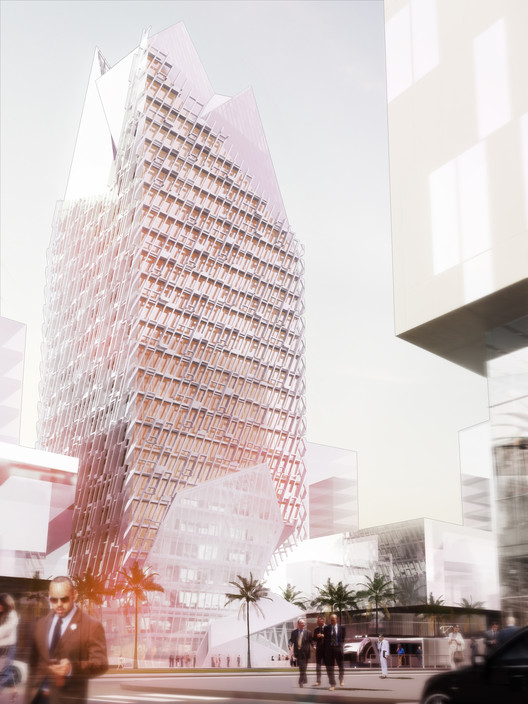 From the architect. Casablanca is expanding its historical role as the gateway to the continent, through government-driven plans that will open untapped markets in francophone Africa to international investment. In the model of Paris’ La Defense, the Casablanca Finance City initiative transforms a blank satellite site - a razed airport southwest of the city center - into a new business district and special economic zone inviting global firms to Morocco. The first tower planned has a critical role in the development, symbolizing Morocco’s vision for the future and setting precedents in building performance, scale, and style for a city that does not yet exist.

This dual role as symbol and precedent informs the design of Casablanca Finance City tower and prompted a focus on creating urban gestures at both a macro and micro scale, at the plane of the sky and the plane of the street. A tapered crown realizes the tower’s function as a new icon for the city; by mirroring this apex downward, the building engages the lower urban landscape with communal programming and distinctive public space. This inverted double-crown allows the building to simultaneously serve as a symbol of the city’s development and as a social node that nurtures an active streetlife in the district.

The open site creates an unusual opportunity in otherwise dense Casablanca to highlight the figurative and sustainable relationship between building and the natural environment. The tower’s base touches lightly upon the landscape; a brise-soleil system wraps the building against the desert sun while maintaining views to the city. Working with the climate and minimizing the ecological impact, the tower sets a standard for contextually-specific performance strategies in future development.