"I have been listening to the voices of the people for about a month now, thinking about the possibility of a review," Prime Minister Abe said. "We have decided to go back to the start on the Tokyo Olympics-Paralympics stadium plan, and start over from zero."

Despite harsh criticism, mainly from a backlash led by Pritzker laureates Toyo Ito and Fumihiko Maki, it was reported last month that the Japanese government would move forward with the designs, saying any major modifications would lead to construction delays. However Guardian Cities has since reported that the government has come under growing criticism as the estimated cost for the new National Stadium rose to 252billion yen (around $2billion). The estimate in 2014 stood at 163billion yen.

It is believed that the Olympic Committee has been instructed to immediately begin a process to choose a new plan.

“Our teams in Japan and the UK have been working hard with the Japan Sports Council to design a new National Stadium that would be ready to host the Rugby World Cup in 2019, the Tokyo 2020 Games and meet the need for a new home for Japanese sport for the next 50 to 100 years.

It is absolutely right that the benefits and costs of the new National Stadium should be clearly and accurately communicated and understood by the public and decision-makers in Japan and we hope that this is one of the objectives of the review announced by the Prime Minister.

We have used our experience on major sports and cultural projects, including the hugely successful London 2012 Games and legacy, to design a stadium that can be built cost-effectively and still deliver the flexible and robust National Stadium that the Japan Sports Council requires.

It is not the case that the recently reported cost increases are due to the design, which uses standard materials and techniques well within the capability of Japanese contractors and meets the budget set by the Japan Sports Council. The real challenge for the stadium has been agreeing an acceptable construction cost against the backdrop of steep annual increases in construction costs in Tokyo and a fixed deadline.”

Zaha Hadid's 2020 Olympic Stadium to Be "Scaled Down" 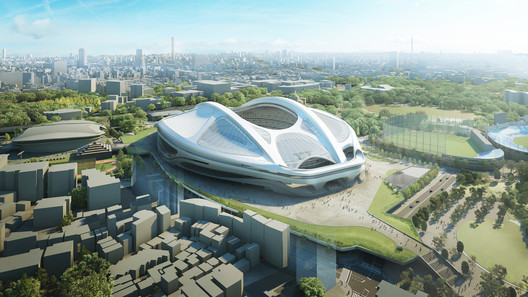