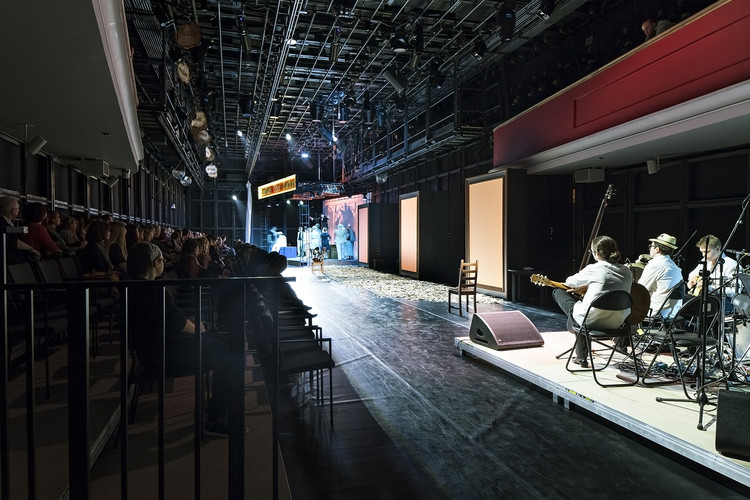 Text description provided by the architects. Moscow Drama Theatre named after Stanislavsky on Tverskaya, the Moscow high street, has recently reopened its doors with a new name, concept and look. It is now Stanislavsky Electrotheatre –an important new venue with the ambition to become a global stage direction centre.

The new name harks back to 1915, when the original art-nouveau building was conceived. By then it held a cinema which by then was a new form of entertainment, and cinemas were called electrotheatres. This provenance of the building later became an obstacle for its further use as a drama theatre, as technologically a drama theatre requires a much more complex planning than a cinema. The architects’objective was totransform the elongated building of the former cinema into a contemporary theatrical platform in which any part –be it the hall, foyer, staircase or the backyard –can be used for all sorts of modern theatrical performances.

Wowhaus has come up with the main principle of the Electrotheatre concept being the transformability of spaces and the openness of internal processes. Mobile barriers divide the technical and public zones, and the functions of these zones can be interchangeable.

Since the main theatre building is listed as the Architectural Monument of Federal Significance, very strict regulations to the restoration of valuable historical elements had to be adhered to. The main restoration principle of Wowhaus has been to reveal the beautiful interior elements that remained in the building since 1915, clean them from layers of unwanted paint and show them in their pure form, and juxtapose the newly-built elements not trying to imitate the original style, but rather trying to retain the atmosphere and design philosophy of the original.

The result is a building paying due respect to its history and at the same time being essentially modern in its feel and use. Following the reconstruction, the theatre has undergone significant enlargement: the three recently renovated corpuses now hold a hall, a drapery section, wardrobe department and scene shop –and a vast new lobby area has been created with exhibition space and an exit into the internal courtyard which, in essence, forms a new town square. Another addition to come later this year is the Secondary stage for chamber performances to be placed in a separate building that will be totally rebuilt. This cultural institution thus becomes simultaneously an important social and cultural milestone in the city.

The task was to transform a very old-fashioned and technologically outdated theatrical venue into a top-notch versatile space for modern performances, at the same time keeping the valuable historical elements intact. Wowhaus kept and restored the balcony as the key visual element of the venue, and the rest of the hall became a fully functional performance space with state-of-the-art theatrical technology. The ceiling and the walls permit placing of all needed theatrical equipment, be it lights or scenery set, in any part of the hall. The entire carcass of the hall thus becomes fully functional.

New mobile seating can be placed in rows as well as be placed separately in different combinations. 70% of the wall panels reflect sound, and 30% absorb it. This is possible thanks to their different texture and form: in order to spread sound across the hall, the panels have been constructed with a zigzag form. Thus, a fully functional ‘stage’can be placed anywhere in the space and no spatial restrictions hinder creative ideas in terms of set placement, sound, light, video or seating. The Hall can change its appearance completely. If black roller blinds that are placed along all the perimeter of the hall, are pulled down along the white walls, it becomes completely black.

Similar spatial structures can be seen in the Foyer as in the Hall (albeit in a simplified form): display panels may be fixed onto them, or elements of scenery, when events are held here. Pylons, mobile barriers and false caissons in the Foyer act simultaneously as latticework for the fixture of exhibition elements.

The whole building has been meticulously restored and cleared of the accretions dating to the period from the 1950s to 1990s, when new paint and new flooring were simply applied or fitted directly on top of the old. The pre-Revolution plasterwork has been revealed once more in its totality, looking now just as it did in 1915.

The Yard and Secondary Stage

This part of the project is to be built by the end of 2015, and with its completion Stanislavsky Electrotheatre will become a unique public space where all sorts of performance arts will be welcome. The backyard was used for purposes of loading and collecting garbage, and three dilapidated buildings were used as technical theatrical workshops. Two of the buildings have been totally reconstructed to hold a state-of-the-art drapery workshop and scenery workshop, and the third building is now being turned into a performance venue for up to 120 visitors.

The whole backyard area will be turned into an open-platform venue that will work during the day as an open-access space for lectures, master classes or just having a good time in a summer café. Later in the day it will be turned into a performance space. Audience, as well as the light and sound equipment , is to be placed at metallic galleries surrounding the space, reminding of the principle of Shakespeare’s Globe theatre. Mobile stage is to be placed in the centre of the yard. The Secondary Stage’s wall facing the yard can be folded and opened, and the interior stage of the building becomes visible to the viewers in the yard. Thus, the Secondary Stage and the Yard form an integral performance complex. 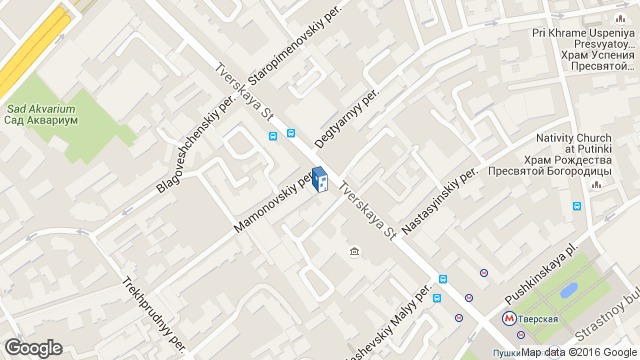 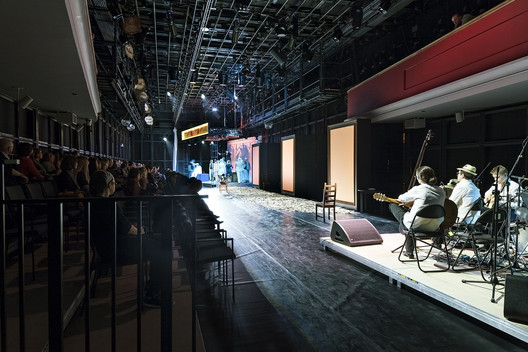