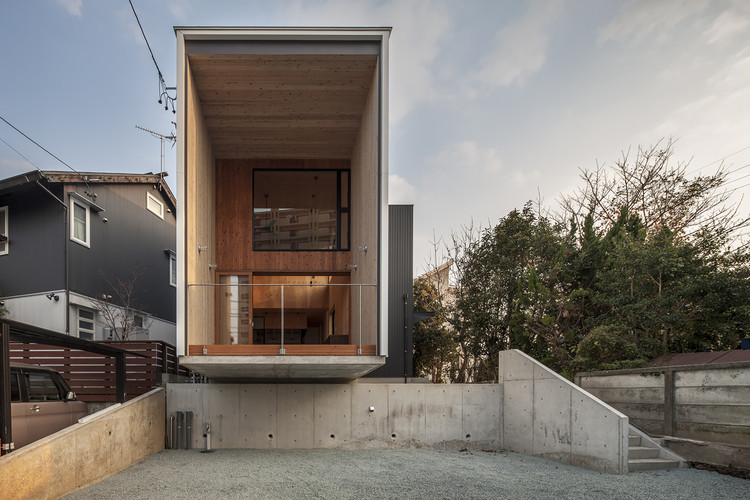 Text description provided by the architects. This Japanese family home by TTAA/Tatsuyuki Takagi Architects Associates is arranged as a mixture structure. It's low cost, but was realized an impressive space.

The site has a difference in height, facing the canal. The opposite bank of the canal has been running a typical heavy traffic commuting roads of Japan.

I made the volume of housing so as to put off the line of sight ahead of such canals and roads, cylindrical. We have created the inside-outeside space in its jumping volume.

Living and the space became a mixture space, such as ”ENNGAWA" is a middle area which is a Buffer space to adjust the temperature and humidity. This space has won harmony with the openness and the surrounding environment.

By also the only base part made by concrete and the cantilever structure be in general wooden structure on it.

The client is a family of mid 30s with a child. As the husband collects automobile as his hobby, a parking space to fit all three of his collection, and also a open wide living area with sense of building material, were requested.

Generally speaking, clients in Japan will ask for a blueprint after land property has been purchased. However in this case, the client came to us before the purchase, so it became our target to bring the most effective cost between which sort of land to purchase, and the design to be build on top.

To leave most of the budget on the living area, this project began by proposing a blueprint which will provide enough parking space, and create comfortable space by taking an advantage of less valued sloping land.

Thus, this project can be considered a total design. The design not only for the house, but the original landscape as well.