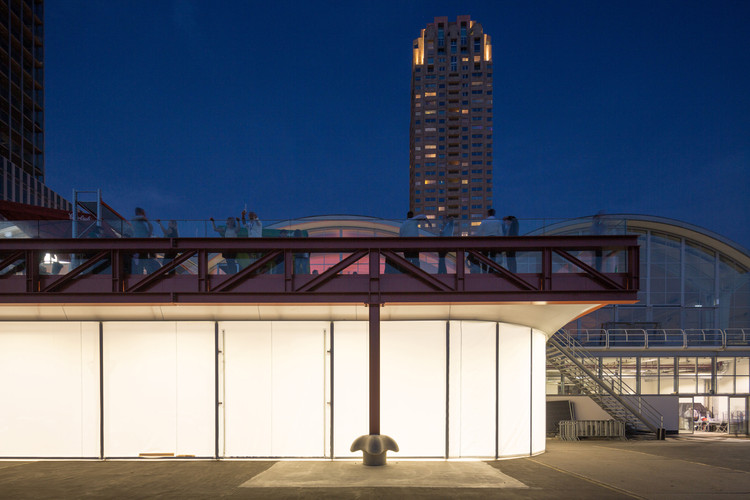 Text description provided by the architects. The number of cruise ships coming to Rotterdam and docking at the Cruise Terminal is increasing each year. To cope with this growth and associated baggage handling, TomDavid Architects have designed an industrial structure that brings together business and pleasure: a Pop Up Luggage Space (P.U.L.S.) with an elevated terrace providing stunning views over the river and of Rotterdam's skyline.

The historic building of the Holland America Line (HAL), or the Cruise Terminal, is one of Rotterdam's most iconic places. In the 1950s, thousands of migrants left from here to travel by steamship to America and a new future. The Cruise Terminal is on the Wilhelmina Pier, which is rapidly being developed into a high-quality part of the city centre. As the number of cruise ships docking here increases each year, an adaptation to the existing building became inevitable.

The Port of Rotterdam Authority and Rotterdam City Development commissioned TomDavid to create a new design, for which baggage handling was a major challenge. TomDavid created space on the ground floor to handle as much internal baggage as possible and designed a Pop Up Luggage Space (P.U.L.S.) outside of the building, creating another 350 m2 of additional variable space. Variable because the industrial 'umbrella structure' TomDavid devised only unfolds when necessary.

When no cruise ships are docked, P.U.L.S. is almost invisible and the wharf is freely accessible to the public. What then remains is a raised terrace at the level of Café Rotterdam. This 'grandstand on the Maas' offers magnificent views over the river and of Rotterdam's skyline, and it also serves as a 'farewell platform'. The colour is inspired by the 'iron oxide' used to coat steel before it gets its final colour. This tone emphasises the temporary nature of the building (10 years), but provides a glossy appearance when applied in a metallic variant. Thus the P.U.L.S adds a splash of colour to the grey shades dominating the Wilhelmina Pier.

Until recently, cruise passenger luggage was handled in a 'party tent' on the dock, which obstructured the view of the HAL – a listed monument – for six months a year. TomDavid worked hard to maintain the sight of the Cruise Terminal from the water and designed a folding structure that takes up space only at its time of use. The sturdy steel construction, with only two front columns and a truss, allows for a large span and gives the terrace a floating appearance. To protect the steel columns from driving collisions, they are stood in concrete bollards. The P.U.L.S. works like an inverted umbrella.

The membrane walls, made of sailing canvas, can be lowered to create a temporary luggage space within four minutes. With the press of a button, it can be folded away once the vessel has departed. In the evening, light shines through the folded cloth, making the café’s terrace seem to float on light, and it avoids creating a disquieting atmosphere under the terrace. The entire structure was devised by TomDavid and further engineered in consultation with Poly-Ned. Heijmans made the concrete and steel structure.

Although already in use, the P.U.L.S. will be officially opened on Wednesday 8 July, together with the renovated Cruise Terminal Rotterdam. 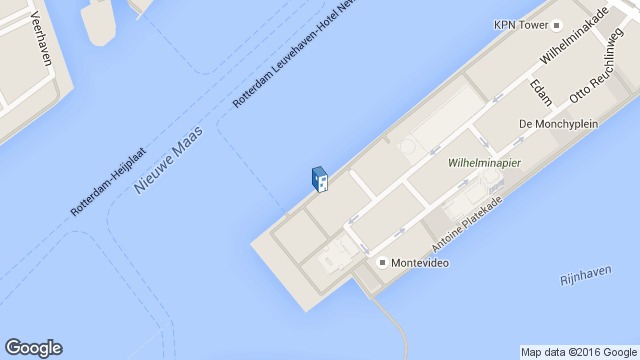