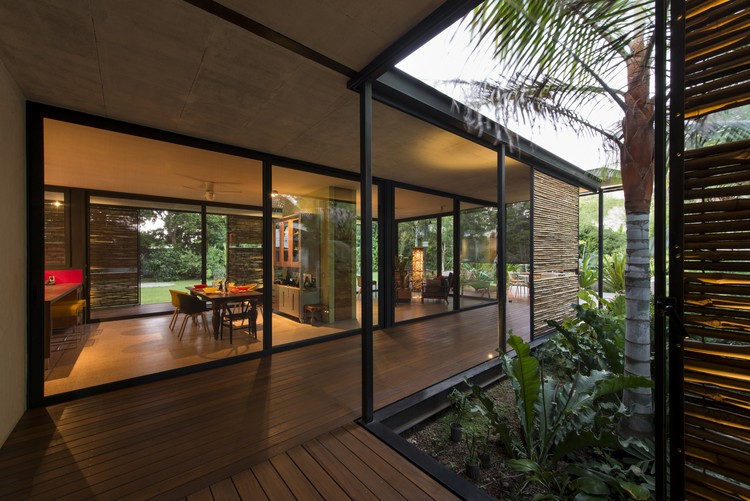 Text description provided by the architects. 500 m2 single family house on a single level, located in an old neighborhood adjacent to the historic center of Merida, Yucatan. The house in in a 2,000 m2 site, with large endemic trees fifty years old, located primarily on the perimeter as a great added value of the site.

The site was also occupied by a house from the 1960s, with a single level and similar size. Because of its lack of architectural value, major damage to its structure and its bad implementation and orientation of spaces, the house had to be demolished.

- Build a thermal, transparent and light house, to favor expansive views of the site, and gradual physical connections to the trees and the new garden created as part of the concept of living in this house.

- Propose a construction system that minimizes the possible intervention of masons, favoring prefabricated construction and minimizing finishing details as attributes of a work inserted in a cultural environment that is technologically far behind.

Among the references that inspired us are the works of Craig Ellwood and Pierre Koenig, and the Case Study Houses in California from the 1950s. In our case and in clear contrast with those works, we consider a major challenge, to introduce the component of sustainability and deal with the apparent contradiction between the architectural logic of maximum transparency-lightness and minimum thermal mass-heat-gain in a hot, humid climate with risk of severe hurricanes.

In response we conceptualized and developed in conjunction with the structural engineers and the company providing the selected thermal material, a hybrid construction system that blends metal bearing elements and cellular concrete. The juxtaposition of the properties of both materials allowed to create a high performance structure whose elements practically reach its minimum possible section.

The construction system achieved allows the use of basic structural elements as 2.5 inch square tubular steel beams and 8 inch IPR beams for columns and girders, capable of coupling to 12.5 cm thick blocks in stiff walls and 15 cm panels for slabs covering spans of 4.8 meters.

The module of the project arises from the optimal use of both materials in their commercial dimensions, which essentially determined the scale and proportions of the architecture: ceiling heights of 3 meters and dimensions of spaces in multiples of 1.2 meters. The program of the house includes three bedrooms with their respective bathrooms; kitchen-living room-terrace in one glass volume, a studio with attached bathroom for guests and use from the pool; service area and garage for three cars.

Separated from the main volume of the house, the program is completed with a "guest pavilion" a building with a single level of 48m2, designed as a test of minimum and high efficiency housing design. This building has a terrace, dining and living area, kitchenette, bathroom and a 17m2 bedroom.

The architecture is defined in the congruence between the rational logic of use of materials and the plastic tectonics that the construction system revealed to us as design opportunities. From this the spaces are designed in relation to different layers of protection: ventilated floors, overhangs that are circulations and light-temperature transitions, sliding-pivoting metal panels with bamboo from the region.

These strategies allow in this case to comfortably inhabit a large glass box in a warm climate and extreme brightness without resorting to artificial air conditioning. A deep study of the properties of materials allowed us to create an innovative and affordable construction system, which among its attributes, can amalgamate cellular concrete with stucco based on a resin from the Chukum tree, an ancestral technique that architect Salvador Reyes Rios rediscovered and reinvented in 1996, since become a legacy for the contemporary architecture of Yucatan. 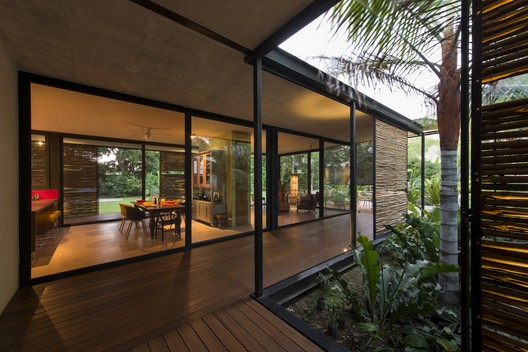