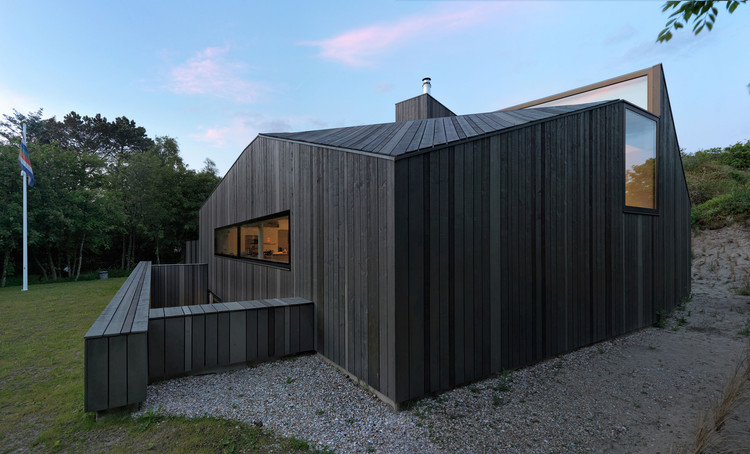 Text description provided by the architects. On the island of Schiermonnikoog off the north coast of the Netherlands, directly bordering the dune landscape, this modest, yet surprisingly spacious, environmentally sustainable holiday home blends perfectly into its surroundings. Due to the extended periods that the family stays there, the island’s maximum domestic footprint of 110m2 was insufficient. The majority of the building’s functions have been programmed into the underground floor, thus achieving the desired spatial quality and size, while maintaining the structure’s affinity with its surroundings.

The L-shaped house is positioned very naturally in the dunes, and its form provides good differentiation between the private and public areas. On the private side, a glass façade offers the occupants an excellent view of the beautiful surroundings. The street façade is closed except for a long horizontal window along almost its entire length, allowing passers-by to catch a glimpse of what is happening inside. As a result, the house is illuminated by sunlight throughout the whole day.

The façade is made of larch-wood of varying widths and colours that will become increasingly grey over time, blending in further with the dunes. The roof – consisting of wood, zinc and moss sedum – will further contribute to this process. The height and form of both roof and façade have been continuously adjusted to the dune surroundings, which also enables the house to develop its own unique character.

The living-room consists of a large, bright open space where the different areas are defined and linked by the slanting roof surfaces. The relationship between the two floors combines privacy with a human scale, allowing family members to use the house in their own way without causing disturbance to others.

The underground floor comprises the bedrooms, bathrooms and sauna. The patio – hidden from view at ground-level by a low wooden wall on the west façade – brings in both sunlight and ventilation. Natural materials such as wood and stone have been used on both the exterior and the interior of the house.

In the design, much attention was paid to making the house environmentally sustainable, not only through generous use of natural materials, but also by controlling energy usage. Good insulation, triple-glazed windows, solar orientation, natural shading on the south façade provided by an overhang, and maintenance of a constant temperature in the underground area all contribute to the sustainability of the building. The use of LED lighting wherever possible, and the fireplace in the living room, do the rest. The house fully lives up to Schiermonnikoog‘s ambition of being a self-sufficient island.