Reactive materials hold huge potential for architects and engineers in the near future, offering forms of interactive and customizable construction that could, if used properly, seriously alter the way in which people interact with their built environment. The massive expansion in the capabilities of touch screens and other glass based technologies have opened up user interfaces to levels where interactive cityscapes are becoming reachable - but creating materials which are themselves reactive is a much less-explored solution. Water Reaction, a project by Royal College of Art student Chao Chen, is an attempt at exactly that: creating a material that reacts to external conditions with no human input required. 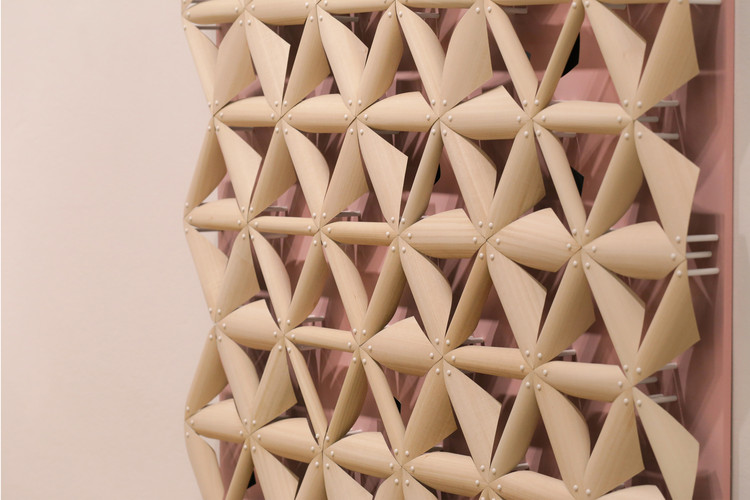 Unlike other more high-tech approaches to this idea, Chen was inspired by a pinecone, knowing that pinecones naturally open and close to protect their seeds from wet weather and allow them to be spread when it's dry. Interested in how this could be replicated, Chen found (with the aid of a knife) that pinecones were actually made up of two layers, one of which is more porous than the other. When wet, this outer layer expands more than the other layer, causing the scale to bend and close the cone. Using fabric, a thin film and a layer of veneer, Chen set out to replicate this seed preserving tactic. By using a porous veneer where the fibres expand across the grain, he created a tile where the outer layer elongates and curves the material away when wet.

Using the tiles to create a canopy, Chen proposes creating structures which shelter you from the rain but, when the sun comes out, the tiles delicately curl up, creating an open roof and allowing natural light into the structure. Although just a prototype at the moment, if the material becomes durable enough, this idea could be expanded from small scales like bus shelters into entire buildings or complexes in warmer areas; hospitals in particular could benefit from natural light and ventilation that still shelters you from the rain.

For more vertical applications, Chen thinks the material could brighten up dreary areas where grey, rainy weather is common. By installing these tiles over a bright background layer, rainy days could spur a building's walls to open like a flower and reveal splashes of color; expanding this to an entire façade would create a genuinely dynamic building. Shrink it down again, and just one strip of his new material can act as a water detector that, when installed alongside your plants, could tell you whether or not a plant needs watering at glance by being either stiff or limp.

Chen's project has so far been developed in only one term: further plans include strengthening the material against winds and increasing its durability. With more development comes more applications, and as ideas like Chen's become more common, we could find that our cities become increasingly responsive - not just to our own input, but to the input of the environment as well.