The 20th century was an era of unbelievable change, with more revolutionary ideas and scientific developments than perhaps any era before it. But among the many developments in the material sciences, one stands as perhaps the most revolutionary: plastics. An experimental group of materials at the turn of the century, artificial plastics are so ubiquitous now that it's almost impossible to imagine life without them.

However, in the 21st century plastics have gained a bad reputation; commonly produced from oil, plastics are a non-renewable resource and, after spending decades or even centuries polluting our environment, most plastics will eventually degrade to release their carbon into the atmosphere. Recycling plastic will go some way to slow this problem, but with so many modern products relying on plastic - and our tendency toward increasing consumption showing no signs of slowing - recycling can only do so much.

But what if there was a way to use plastics to actually reverse the release of greenhouse gases? That's exactly what Newlight Technologies is attempting to do with their carbon-negative plastic, AirCarbon.

AirCarbon works by collecting excess methane from farms, landfill sites, and other industrial processes. Usually, this methane would be either vented into the atmosphere or "flared," - in other words, set alight, releasing the stored carbon as carbon dioxide and other greenhouse gases. However, AirCarbon instead combines this methane with air and a biocatalyst which converts the methane into plastic polymers.

"The basic science to convert methane into thermoplastic polymers existed for many decades," explained Newlight Technologies co-founder Mark Herrema in an interview with Smithsonian Magazine in May. However, the trick developed by Newlight Technologies lies in their biocatalyst: in the past, each kilogram of biocatalyst added to the mixture would be able to produce one kilogram of polymer before it expired, making this method of plastic production too expensive for industrial use.

Founded in 2003, Newlight Technologies spent a decade silently researching how to improve this ratio, and by 2013 they had developed a biocatalyst that was nine times more efficient than before, with each kilogram producing 9 kilograms of polymer before shutting down - and most importantly actually costing less than traditional plastic manufacture. It was then that Newlight started their shift into commercial operations, and as of 2015 they are producing 75 different plastic products, from packaging films and bottle caps to car and electronics components.

"It is our belief that climate change is not going to be solved by subsidies or taxes. We think that the only way we are going to solve climate change, in the time and at the scale that is required, is through market-driven solutions," explained Herrema to Smithsonian Magazine. After their initial success, Newlight Technologies is focusing on expanding their operations, setting up production plants in states such as North Dakota and Texas, where practices such as fracking in rural areas creates an excess of methane that can literally be seen from space.

Newlight Technologies' next milestone of production is 50 million pounds (22.7 million kilograms) of plastic per year, but that's just the start. Herrema compares their technology to another breakthrough in plastic technology, Union Carbide's UNIPOL technology, saying that Newlight Technologies aims to achieve a similar scale to Union Carbide's peak of 60 billion pounds (27.2 billion kilograms) per year.

With ambitions like that, it may not be long before architects can talk about using plastic as a sustainable option, a material that sequesters carbon in much the same way as we talk of timber today. 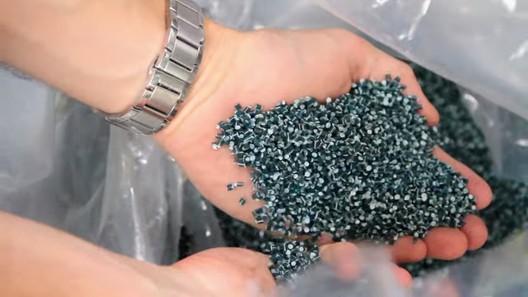