Save
Town Hall Bloemendaal / NEXT architects 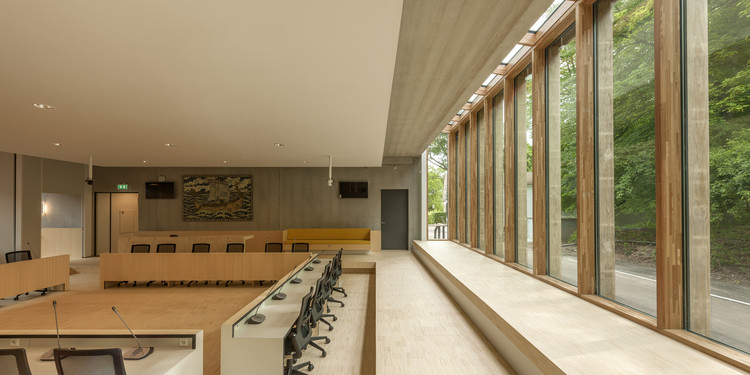 Text description provided by the architects. The new Bloemendaal Town Hall opened its doors on 25 June 2015. The realisation of the new town hall is the coping stone of a process set in motion with the ‘uniting’ of the municipalities of Bloemendaal and Bennebroek in January 2009. With these central premises the municipal organisation, which now encompasses the civic centres of Bloemendaal, Overveen, Aerdenhout, Vogelenzang and Bennebroek, has also found its physical expression. One address, one face, one identity.

Located at the edge of sand dunes and mire, the landscape architect J.D. Zocher built a country house here in 1820, a white plastered villa in neoclassical style. In 1950 the estate was bought by the Bloemendaal municipality, with the intention of extending the property. This intended extension was never realised however, and in 1966 a new building was finally constructed, incorporating a faithful copy of the facade of the original villa.

In 2011 history appears to repeat itself: NEXT and Uytenhaak are given the task of revitalising the existing 1966 town hall, to incorporate sustainability in the design, and to make it suitable for modern working practices. The design process started with the intention of only a limited extension to the building. It envisaged a penthouse above the old building, which was to be entirely gutted internally. This led eventually to the decision to retain the front of the building and the facade, and to construct a new, compact building that is slightly separated from it. The architects managed to realise this new program within the contours of the old building, and to retain its characteristic identity.

With this design the history of the country estate can clearly be seen. The original building and the new building are united in a layered fashion; the design represents a dialogue between old and new, between history and the present.

The strength of the design is to be found in a number of smart innovations. For example the sand dune landscape has been partly excavated to open up the level where the cellar previously was as the principal public area and Citizens’ Hall. The landscape, designed by landscape architect Peter de Ruyter, flows away downwards and in this way a new entrance has been made on the south side in the gap between the old and the new buildings. Whilst the characteristic front facade retains its function as a ceremonial entrance, the new town hall has been given a new entrance here, on the south side. The park surrounding the town hall blends effortlessly into the undulating character of the dune landscape. A cantilever design conservatory forming part of the council hall is a prominent feature within the East facade and this echoes the neoclassical row of columns on the west facade. Whereas the building was previously primarily orientated towards this west facade, with its characteristic architecture, it has now become a building with four extremely presentable facades.

The centre of the new building is formed by the Citizens’ Hall, a light and spacious area in which the ambition of the town hall to be the home of the community finds its ultimate expression. Here it will be possible to organise major events such as concerts and investitures. The council chamber, situated on the first floor, opens out onto the Citizens’ Hall. Together they formed the democratic heart of the building.

Atriums and a patio bring daylight deep into the building. This makes it possible to realise a highly compact building which still has generous quantities of natural light flowing into it. With two 10 meter high sections on each side and a 12 meter high central section the building is extremely deep. In spite of this the atrium and the patio make it feel spacious and unenclosed. The open space between the original front facade and the new building, which is characterised by large panes of glass and high atriums, also contributes to the feeling of openness and transparency.

With this new building the municipal organisation is also taking a step towards modern forms of working. The interior design, also created by NEXT and Uytenhaak, assumes a flexible working factor of 0.7, meaning that the use of space per member of personnel has been reduced to 70%. This is possible by consciously assuming activity related work. The architects developed a design with this in mind, in which each type of workplace has been given its own character, with conditions that enable people to work, whether this be work requiring concentration, or work that involves interaction. The use of light, natural materials like bamboo, and of subtle colour accents in the furnishings, make the interior an attractive environment. The architects developed a series of carpets specially for the town hall, which reflect the municipality’s art collection in terms of use of colours and overall impression.

Sustainability forms an integral element within the new town Hall. By means of a wide range of technological applications the building benefits from smart energy management. This keeps the total environmental cost as low as possible. In the first place this is realised by including recycled material in the construction, by building in a way that is demountable, and by seeking to achieve a great deal of efficiency in maintenance. In order to keep energy consumption as low as possible hot and cold storage technology, solar panels, and smart lighting are implemented. Furthermore the introduction of modern working practices means that the use of space per employee is reduced. When people are absent they no longer take up space or consume energy. 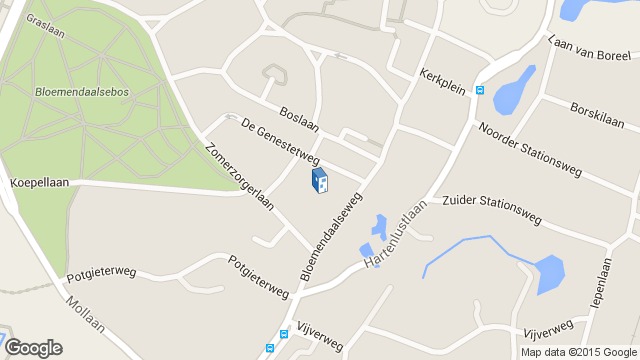