For over 30 years, the Emerging Voices prize given by the Architectural League of New York has offered the architecture world a glimpse into the future, showcasing radical ideas from architects at a crucial stage in their career development. In this excerpt, the opening to her essay "Idea: Claiming Territories" in the newly-released book "Thirty Years of Emerging Voices: Idea, Form, Resonance," Ashley Schafer discusses how the prize has acted as a litmus test for architectural culture, with laureates often presaging trends and sometimes even singular projects years or decades before they occurred in the profession at large. 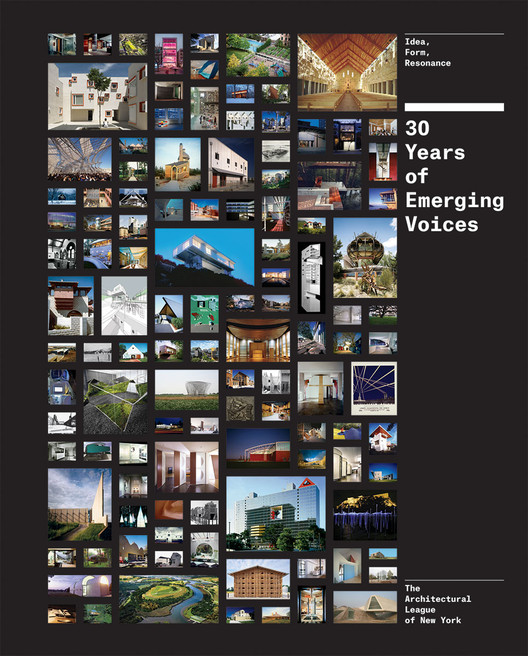 Since 1982 The Architectural League’s Emerging Voices program has captured a protean moment in the lives of architects, landscape architects, and urban designers, when they are neither recent graduates nor fully mature practitioners. During this fleeting but intense career phase, conceptual rawness and clarity coexist; work unpredictably oscillates between an innocent optimism and an experienced confidence. Idealistic, experimental, and formally clumsy on occasion, some of their projects could be dismissed as hypothetical, utopian, or even naive. Steven Holl’s (EV82) Bridge of Houses proposal for the then-abandoned High Line on New York’s West Side may have seemed fantastical at the time and, more than a decade later, Reiser + Umemoto’s (EV96) complex network structure for the Yokohama International Port Terminal competition may have appeared structurally impossible to calculate, let alone construct. Yet, within three decades of the program’s inception, a host of newly completed buildings engage James Corner Field Operations (EV01) and Diller Scofidio + Renfro’s High Line park, and Jesse Reiser and Nanako Umemoto’s structurally complex Taipei Pop Music Center is under construction. In another thirty years will we look back at SCAPE / LANDSCAPE ARCHITECTURE’s (EV12) Oyster-tecture, which is being tested in a pilot project in Brooklyn’s Gowanus Bay, with the same knowing appreciation that we now regard the prescience of those two earlier works?

If the League’s record for predicting future design leaders in North America holds, we will. While relatively few past winners have yet reached “starchitect” status, and only one, Thom Mayne of Morphosis (EV83), has been awarded a Pritzker Architecture Prize, nearly sixty of them have become deans, chairs, or heads of architecture schools. The percentage of prominent academics begs the question: What exactly does the program recognize? While the Emerging Voices jury reviews “significant bodies of realized work,” this catalog reveals that the award is focused on the testing of limits and the evidence of intentions rather than on the demonstration of an established practice. More pointedly, the program seeks to identify immanent potential for intellectual contribution to the field, and, although never explicitly stated, it has consistently honored practitioners who actively question the disciplinary status quo.

In order to read this catalog as more than a compilation of seductive images, we must take the term voices quite literally. While the honorees’ required public lectures compose an oral history outside the scope of this volume, the images, particularly the drawings and renderings, stand as a graphic novel inviting the reader to connect the dots across the years, or write a new narrative of this work from the perspective of recent history. At times the story reveals dramatic cracks and warbles in the discourse, telegraphed through architectural representation techniques as the underlying paradigms change. And the program’s first thirty years have encompassed many changes: from the end of high postmodernism and the emergence of critical architecture under the influence of poststructuralist philosophy (primarily via Gilles Deleuze and Jacques Derrida); to a fascination with systems theory—organic and biological forms and structures—concurrent with early digital design practices (circa 1992); to the influence of Dutch programmatically driven work (following the publication of Rem Koolhaas’s S,M,L,XL in 1995); to obsessions with surface, sensory and atmospheric “affects,” infrastructure, and landscape in the late 1990s and early 2000s; to the ascendancy of ecological and social issues in the 2000s that echo experimental practices of the late 1960s.

In any given year the selected voices are sufficiently diverse to elude discrete labeling, but the collection in its entirety reveals the shifting preoccupations that have defined the trajectories of both individual practices and the discipline, along with its concomitant discourse, over three decades: linguistics, fragmentation, and disjunction in the 1980s; dynamic systems, flows, and formal, digital experimentalism in the 1990s; and collaborative networks, parametricism, and a nascent socioenvironmentalism in the early 2000s. Each passes through its own cycle of youth, adolescence, and maturity. Browsing through this collection of images, it is easy to spot the onset of significant disciplinary moments, such as the rise and maturation of digital practices and the opening of the field to extradisciplinary influences, particularly landscape and urban design. Less apparent in this catalog is the backdrop of discourses that gave clarity and coherence to the designers’ voices. In this essay, I will identify some of those underlying influences as a means to shed light on their effects and implications for the Emerging Voices and the field at large.

You can read the full essay by Ashley Schafer and many others by purchasing the book at the link below: 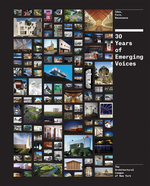