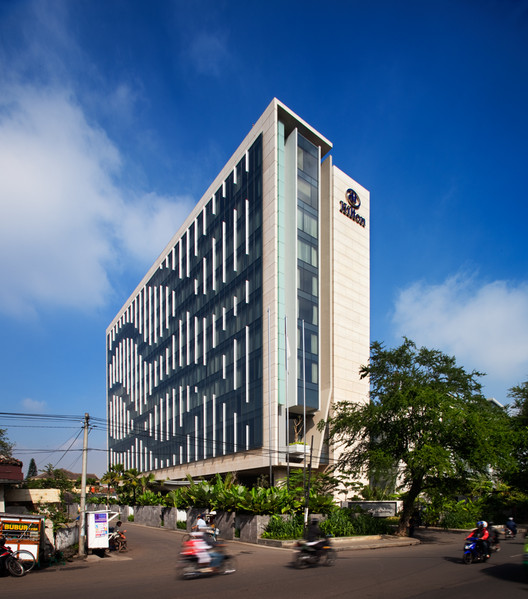 The brief called for a five-star, 186-room contemporary urban business hotel with world-class conferencing and event function facilities catering to both business and leisure travelers. In response, the team conceptualized an urban resort inspired by Bandung’s topography, with its surrounding volcanic mountain range, whilst integrating Javanese culture and visually engaging the mountainscape. The resulting integration of the local urban and geographical characters shapes a seamless experience throughout the hotel that dissolves the boundaries between the inside and outside of the hotel and encourages interactions between hotel guests and locals within its public promenade.

The Hilton Bandung has challenged the way hotels are designed and experienced in the Asian urban context. The building stands out, capturing the city’s present state of development, but its usage of glass and stone-covered walls resonates with the city’s heritage and therefore engages emotionally with its largely Indonesian guests. The building does not compete with the predominantly Art Deco-styled buildings in the area influenced by Bandung’s Dutch colonial past but complements and reinforces the tradition of glamorous travel with which Bandung has historically been associated.

Our Solution for Architecture and Interiors

The team is committed to principles of contextually and culturally sensitive designs informed by the landscape and the urban development of the locality. Accordingly, the design process for this project was based on a comprehensively researched understanding of the cultural, economic and geo-climatic context of the Bandung area.

Bandung in West Java, Indonesia, has long been an exclusive weekend resort destination, blessed with a relatively cool year-round temperature averaging 24 degrees Celsius given its location in the elevated valley of the Parahyangan Mountain range. After Indonesian independence from the Dutch in 1945, rapid development and urbanization transformed Bandung from an idyllic town into the now bustling Metropolitan area of 15,000 people per km². Despite its dense population, Bandung still retains the charm that attracts weekend travellers, visitors and business travellers from Jakarta and beyond.

The site is at the heart of the city centre, a departure from the late 20th century trend locating resort hotels and villas in the foothills to the North away from the heart of the city. Located near to the Bandung Central Train Station overlooking a large land parcel previously occupied by a military facility, the hotel is a catalyst for revitalization of the Urban Centre. Proximity to the Central train station provides easy access and encourages Indonesians seeking a weekend getaway from Jakarta to travel by train, thereby alleviating the busy road traffic.

Bandung’s topography, with its surrounding volcanic mountain range, inspired the response to sculpt the urban ground plane into a landform of ‘cliffs’ and ‘valleys’, and a central atrium riverbed around which the hotel public spaces are organised. The landscaped ground plane is folded into a massive stone canyon wall facing the lobby, its carved texture inspired by a geometric Javanese batik pattern. As it extends upwards, it wraps up to the reception, ballroom, business center and spa and culminates in the rooftop leisure retreat. The dramatic unfolding of spaces throughout the architecture, landscape and interior design offers a holistic multisensory experience imbued with the spirit of Bandung.

A series of bridges and stairs enable the smooth flow of guest traffic to the ballroom, dining room, business centre and spa. Most dramatic is the asymmetrical cantilevered spiral stair on which guests promenade in droves to the ballroom at weddings and events.

The room wings are suspended above the new topography in perpendicular double loaded blocks, the main wing facing North and South to the distant mountain vistas and the lower West facing block overlooking the leisure deck.

Most rooms and suites, at a generous 40m2, were created to serve the travel needs of the typically very large and close-knit Indonesian family with a proclivity to stay together in one room. These are accessed from a discrete set of elevators at the lobby level that begin the retreat from the excitement of the public areas. All rooms, including their glass-enclosed bathrooms, offer dramatic views of the mountainous perimeter, reinforcing the hotel’s resort ambiance. Like the public areas, the rooms are complete with refined furnishings and rich materials inspired by the Javanese aesthetic. Touches of rich timbers, Ikat woven fabrics and Batik-inspired carpets continue the tradition of glamorous travel with which Bandung is associated. 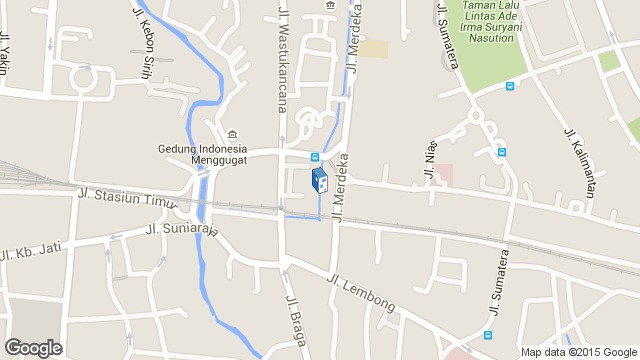