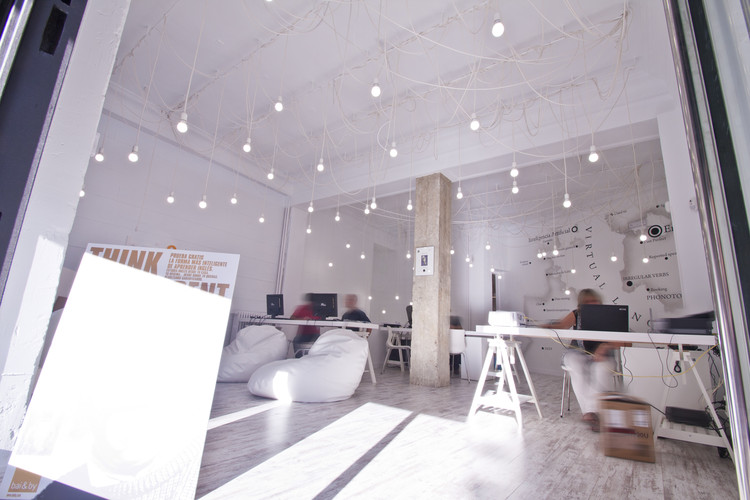 Text description provided by the architects. Bai&By is a language training company that differs from the rest for its innovative and cutting edge philosophy, always researching and conforming to the latest trends and efficient learning systems, all this supported by a base studied and developed.

The particular context in which this request was received was that there was only a month to perform design and construction. This challenge is trying to see as an advantage to meet the design argument. Context and argument became one when we visit the first time the place. It was an old local in Madrid that suffered many works and changes in the past and in which his last deal was a lamp store that left its mark on the ceiling of the room, crossed from side to side and in its entirety by metallic tubes which, in the past, lamps hung. To clean up some walls, the remains of moldings and walls that are boarded up at the time. It was then decided to make a work of reform and recovery than maintaining their existing history and, true to the philosophy of the new business.

It was decided to clean walls, pillars and ceiling and try to provide an environment to local manufacturing of generator workshop ideas, throwing a bucket of white paint to "mummify" their history, and pretend to be a new paper in white, in which time the ideas usher in the new company. Tubes were preserved roof, winking at his recent history, invented a lighting system with multiple white light bulbs that hang through these tubes and delimit spaces only its position and height.

The soil should also be white, suffered, and personality factory for daily activity, imaginatively colorful, stand in this environment. As in it would be implemented learning activities in addition to the commercial, which was sought which would give the floor the warmth that seemed essential to feel at home, using a floating platform with the features mentioned for it.

The place, in addition to being a focal point for information about the company, should also be a place of study for clients wishing to do so, always remain true to the philosophy of Bai & By. That is why the space was designed airy, creating two distinct areas of business and customer service, and a study. The latter is shown fully abroad and performed in a relaxed on couches and "poufs" with computers connected to the internet and in a "chill-out", which is extensible to the outside in the summer. From the outside it was intended to maintain the strength of the idea, so the target was enhanced with a powerful contrast and faithful to the logo of all time: the black. Rosa porrino granite facade and so widespread in previous years remained but was covered with black sheet metal that regularized oxiron entire facade and the windows white framed extolling their business outside.

In the already long life of Bai & By advertising campaigns were conducted multiple successful rescue and wanted to show the public. The best way to do this and be faithful to the minimalist design and edgy attitude was projecting directly on one of the windows day and night on a vinyl specially made for it. This projector adds the advantage of the white walls project in videos or pictures for exhibitions, meetings and explanatory talks. In this way recovery is thought to record in one wall map that was created in the early years of Bai & By, which at the time was no longer used and is now projecting the main idea of this leading company in language teaching, the universality of the ability to communicate. 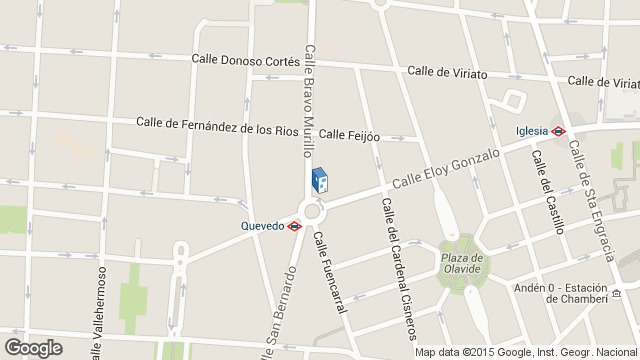