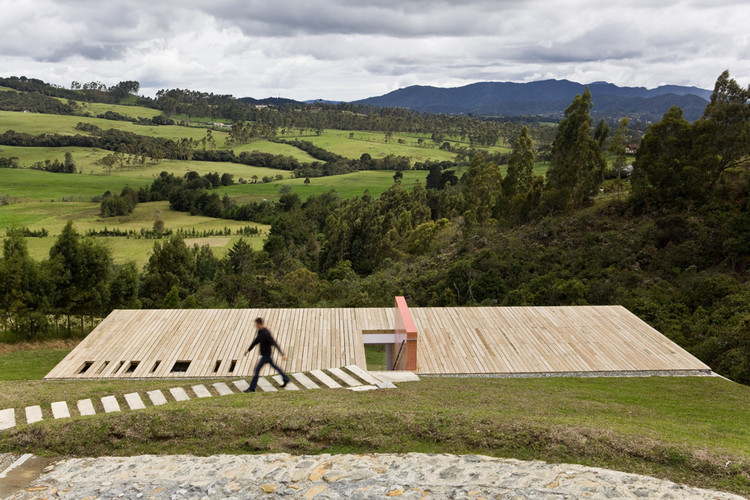 Text description provided by the architects. Santa Elena is a rural farming area up in the mountains, east of Medellín, Colombia. It composes a group of 17 small villages called: “veredas”. People who live down in the valley think of Santa Elena as a scenic, fresh air place of cool temperatures.

Most of the land around Santa Elena, including the beautiful Arvi Natural Park, is state owned and protected. Building density restrictions insure that the area will remain a rural setting of rolling hills, great vistas, streams, forests, clean air and water.

Outside the villages Santa Elena’s scattered development landscape is populated mainly by large vacation houses or weekend retreats. Only a small percentage is made up of lived in year around residences owned by descendants of foreign immigrants from Germany, France and Italy.

The steep sloped solar on which the house was to be built had been purchased by two different owners. One of them occupied the top of the hill with a 300 M2 house and about three years later I was commissioned to design a cottage no larger than 100 M2.

Rather than trying to make an architectural statement, I opted for complementing the superb view with an almost imperceptible mark to the site.

I wanted the natural landscape to continue its course so the house is accessed through a very discrete opening on the roof deck emphasized by a pink mosaic wall. That is all what is perceived from above; therefore I call this view the main façade. As the roof deck folds down in sections stopping at different heights the scenery façade gets generated framing different views along a linear circulation path.

It’s all about helping nature to move with the architecture form. I think I have achieved that with the use of materials and the way one articulates with the next in progression.

The client requested a specific program of two bedrooms, (one at each end), two bathrooms, small kitchen and meditation room. No lounging areas except for the roof deck which occasionally would be used as a platform for yoga.

All of these spaces are linearly arranged and threaded by a circulation facing de view. As one walks along, different versions of the landscape are revealed.

Both bathrooms are at each end so the light coming through is regulated by a pattern of openings with glass block. This is really a pixilated abstraction of the pine tree forests which flank the site on both sides.

There was no need to provide a heating or air conditioning system. The climate gets barely cool at night so interior materials like cork plank flooring help maintain the heat captured during the day.

The house is roofed with a waterproofed very thin and slightly sloped concrete slab. Disposable bamboo boxes were arranged on a brick pattern and used to form the underside of the slab while it was being poured. That is a very traditional method of casting concrete in the area while it provided an incredible ceiling texture. Storm water is collected to the back of the roof deck against the slope of the hill in a concrete channel drain which runs the width of the house. The pressure treated wood deck system simply sits leveled on the concrete slab. Planks are separated so the water filters through and drains down.

Interior details are very simple. All walls inside are painted white and the ceiling is painted a very light shade of cool gray. Doors are flush to the walls creating a monolithic impression. The bathrooms needed to express dynamism and movement as well. Their walls are tiled with white and three shades of blue glass mosaic creating a pattern of tiers running in the same direction with all the rest of the materials. The same effect is reinforced with the narrow mirror glass which folds up to the ceiling. Four blocks of end grain cut teak make the top of the wall hung vanity on which a vessel sink rests leaving cleanable floor space underneath. The shower and bath glass sliding doors are silk screened with a digital photograph of a water splash.

Closets have no doors. Instead a reclaimed wood beam hides the curtain rods from which Dupioni silk drapes are hung. 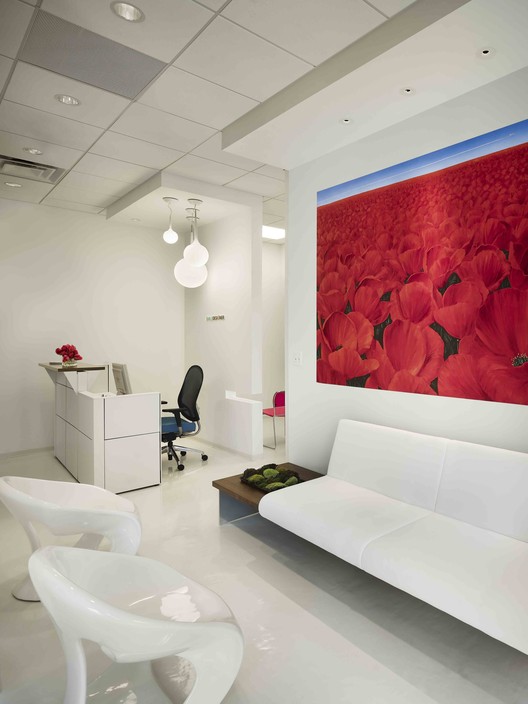