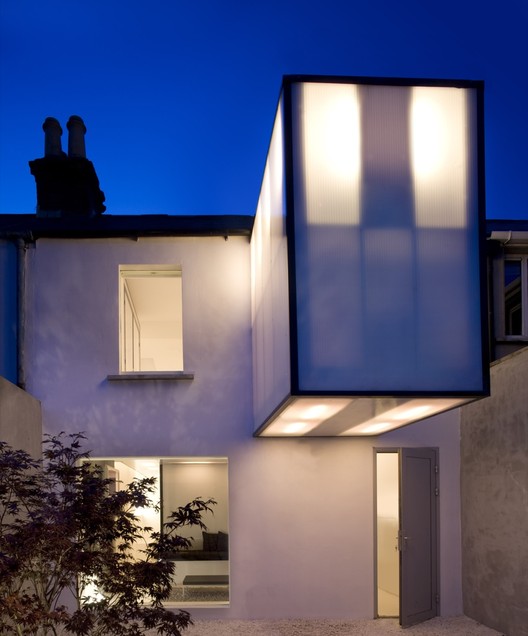 Text description provided by the architects. A house is excavated and a space created. The insertion of an object allows inhabitation.

The house is on a terrace whose split-section is native to Georgian Dublin; a grand parlour to the front with smaller rooms to the rear at half-levels one up and one down from the street.

The project begins with removal - of the existing extension, internal walls and earth – bringing the entire house to lower ground-floor level. This opens the volume of the house as a double-height vessel, full of light.

A cruciform object is inserted; a piece of architectural furniture which spreads tree-like from a concentrated base. Services such as kitchen, toilet, storage and stairwell are housed within this trunk - providing for living and dining in the spaces around it.

Above this is a platform for sleeping, dressing and study spaces. The four branches of the structure hold various functions – two which span to the side walls act as wardrobes while that to the front is a cantilevered reading desk for the teacher-client. The fourth branch extends through the rear wall and projects two meters beyond it housing a shower room, which is glazed to the sky, reminiscence of the traditional “Georgian return typology”.

A ledge running along the perimeter wall downstairs expresses the retaining wall which was built against the street and neighbouring houses - this doubles as a shelf for the display of books and artifacts in the living and dining areas. Opening out from this ground floor is a generous garden with a simple rendered wall, which hides a secret reading room and bathing area. This private realm extends visually to the rear of the site through a glazed wall, which can be opened allowing for sheltered outdoor bathing.

First presented at the arrival platform, the house must be circumambulated before it can be fully understood. At each vantage point the space can be conceived as contained by the existing shell with its double-pitched roof and unaltered openings. The entire house is a continuous yet differentiated volume – only the washrooms are fully enclosed. A complex series of interconnected and overlapping spaces is set up by the architectural insertion and its projections.

The insertion is constructed with polycarbonate and steel. This lightweight structure is also the primary source of light in the evening – inset fittings cause its translucent surfaces to illuminate the spaces, which it generates above, below and between the object and its container.