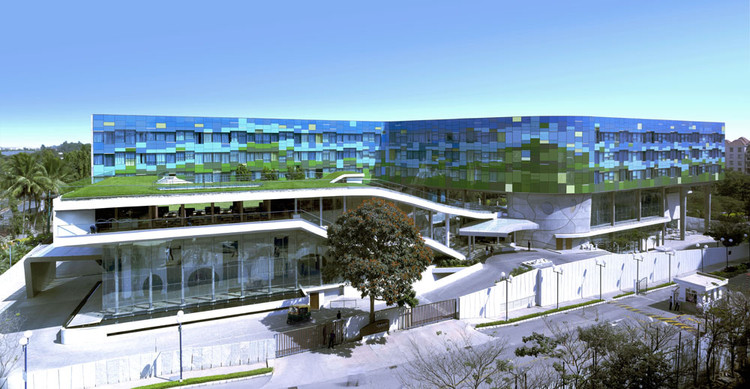 Text description provided by the architects. The Brief

TAJ Hotels, Resorts and Palaces engaged WOW Architects | Warner Wong Design to design the flagship of their new brand Vivanta. Located at the entrance of the International Tech Park at Whitefield, Bangalore (ITPB), India, the hotel is a gateway statement between the IT Park and the developing city around it. The brief inspired the team to question and push the boundaries of hotel design, not just to address the needs of the discerning business traveller coming to Whitefield, but also to redefine and intensify the hotel as a contemporary socio-cultural hub for both the IT Park and IT-based population in Whitefield.

Our Solution for Architecture, Interior, Landscape

The building embraces Bangalore’s culture and climate, adopting a site-specific landscape strategy that plays on relationships between interior and exterior spaces. Public and private spaces interweave in an endless promenade of spatial experiences with culturally distinctive cinematic qualities that allude to the circling and twisting of traditional Indian dance forms. The resulting seamless experience dissolves not only the boundaries between the inside and outside of the hotel but also the stigma of a five-star hotel’s inherent social and cultural status, encouraging casual interactions and exchanges between hotel guests and locals within its public promenade.

Constraints prescribed by the low height restrictions and the high site coverage in the urban design guidelines were resolved through a ‘landscraper’ (as opposed to ‘skyscraper’) concept. To maximize the high site coverage, the ground plane of the site was conceptually manipulated into a mobius strip that would constitute the podium of the hotel. The twists and folds of the strip extend the perception of space. As the landscape is introduced back to the folded ground plane, the podium seemingly dematerialises, blurring the distinction between architecture, interior and landscape. The three-storey room block then extrudes from the ground plane, hovers above and flexes its way around the site, lifting its way mid-air to enclose 200 rooms within its form.

From inception, both the team and client were wary of the local construction industry’s workmanship limitations. Adaptively, workmanship defects were embraced as part of the aesthetic through finishes intentionally celebrating the raw and rustic look. This included a strong bush-hammer finish, used in parts to enhance or hide the texture of the exposed concrete. In areas where concrete was not appropriate, rough bagged render, stone or simple timber paneling was used. ‘Flux lines’ embedded in the concrete interior and exterior surfaces symbolise the brand, and avoid and conceal conventional expansion joints. At all times, the material palette for both exterior and interior, including the selection of fabrics, was kept sensitive to the local conditions of supply and procurement. These maneuvers avoided the extensive carbon expenditure of importing materials from outside South India.

The hotel rooms are housed in a pixelated greenscape. This façade design grew out of a desire for remembrance of the original site prior to development. A digitized image of the site’s lush landscape was transposed onto the façade such that from a distance, the building merges contextually with the greens of the earth and the blues of the sky.

Sustainability also takes on a poetic ideal emanating from the sculptured form. The landscaped ground ‘plane’ becomes the green roof, reducing heat (by adding mass and thermal resistance value) and cooling loads to the podium spaces beneath. Rainwater is also harvested from its ‘planes’ and channelled for reuse in landscape irrigation. By creatively composing highly reflective glass with dark and light tinted ones, this low-tech solution to the hotel facade not only alluded to the memory of the original site but also achieved its OTTV values without compromising views from the guest rooms.

The interior design is an extension of the architecture and landscape infused with the contemporary values of the Vivanta brand. Entering the lobby, guests experience no clear transition from outdoors to in, where they find themselves in an indoor lounge garden. In banquet halls, faceted walls fold up to the ceiling, enveloping guests in rhythmic portals. An abstracted Indian motif grafted onto a sound absorption surface aids acoustical comfort without being obtrusive.

Near the lobby and nexus of activities is the all-day-dining restaurant. Its tall, voluminous space connects to several courtyards, gardens, terraces and the main pool deck. The ceiling of the dining room is a dynamic ‘energy field’; a rippling and waving surface that interacts with the dining activity below. The buffet is a series of Pan-Asian food stations that offer samplings wrapped up in an architectural opera - the floor, walls and ceilings wrap, warp, fold and flow into each other. Separately, ‘Terracotta’, which specializes in India’s Northwestern cuisine, features a dining room, an open plan kitchen and a large dining patio where guests can take pleasure in Bangalore’s mild climate. The kitchen is a backdrop to the restaurant where the bread oven, tandoor and grill become showcases for the guests. Material patterns of the floor flow from the outdoor patio into the dining room, then wrap up to the ceiling, in a seamless transition of outdoor to indoor spaces.

The rooms are based on an urban studio loft concept meant for the urban nomad with amenities affording guests to work effectively or travel comfortably with business colleagues. Each was conceived of as one open plan space, within which 28m2 is zoned into a bedroom study corner, relaxation corner, naturally-lit shower, walk-in wardrobe, bathroom and glass-enclosed WC. The appliances and conveniences of a television, mini-bar, magazine rack and AV systems are all built into walls. Kissed with natural light and designed for space conservation, the rooms carry an open, light and lifted ambiance, reinforced by way of fit and finish. The bed as a central feature becomes a circulation element, evoking spatial fluidity.

The hotel’s resultant form and function coalesce into a symphony of meaningful, spatial and sensorial experiences that shapes the Vivanta brand and signals the coming of age of hospitality design in India. 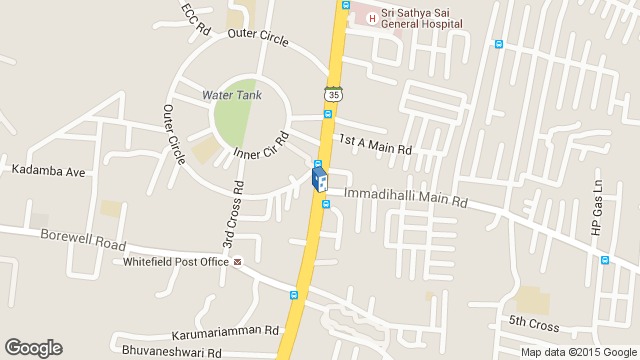 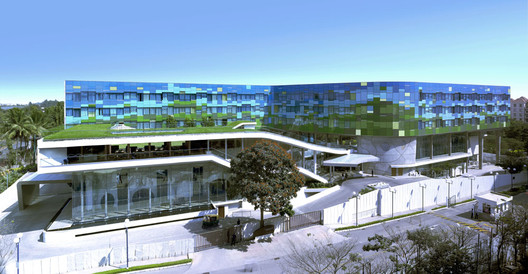