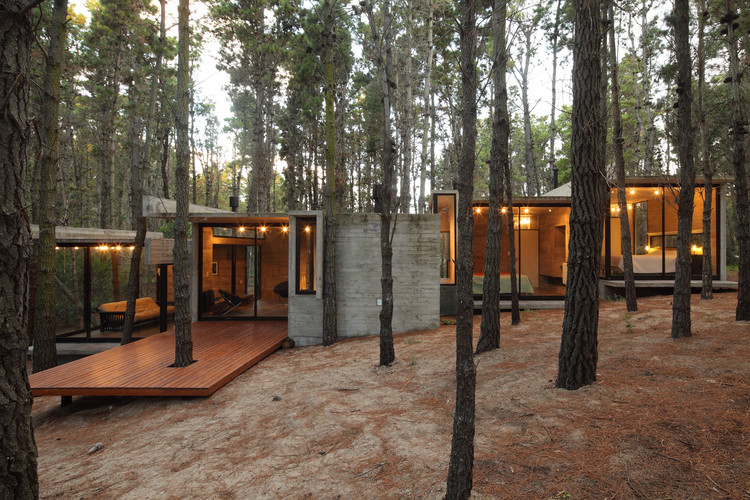 Text description provided by the architects. This work is the result of a process that began in 2004 with the construction of a summer house in the forest of Mar Azul.

It was about intervening in an area of outstanding natural beauty, owner of a wild strong presence that gradually has been domesticated by the proliferation of constructions with a formal search between a bucolic character and picturesqueness which in no way refer to that environment nor to this present.

The project was undertaken as an opportunity to propose shapes, materials and alternative uses, in harmony with that particular environment. The search was then oriented towards a purposeful architecture of a more relaxed housing and whose materiality and formalization was the result of a desire for belonging to that pre-existing reality.

Thus the recognition of the particular microclimate of the maritime forest of Mar Azul and the atmospheres it recreates, as well as the need to concrete the construction at a distance, were determinants of the aesthetic-constructive decisions that defined the work. The need to capture the light that passes through the trees led us to conceive the house as a “semi covered” and to resolve it with big windows, which provide long hours of natural light and full integration with the scenery, while from the outside they reflect the privileged landscape creating a house with less presence. The decision to accelerate the constructive stages to allow monitoring of the work at 400 km away made us choose the exposed concrete as the main material. The shadow of the forest allows us to use this material since it provides the sufficient thermal insulation. The thermal conditioning of the house in winter didn’t matter much because it’s supposed to be used in summer; however, we foresaw a heating system. The water resistant insulation was resolved by using a very compact concrete and studying the shape of the outer-skin in order to reach faster water drainage. On the other hand, the color and texture of the exposed concrete made by wood tables have a strong and mimetic presence, so the work is in harmony with the landscape.

Briefly, an outer skin made only by two materials -concrete and glass- resolves the integration with the landscape and the formal, structural and functional issues apart from the facades and the maintenance.

With these concepts was designed and built the AV HOUSE.

The 20m x 30m field is located in the forest of Mar Azul and its particularity is an important and constant slope in the direction of one of its diagonals. The views from the front are protected by the vegetation, very profuse all over the property.

The order of the client was a house for rent, about 100m2, with an aesthetic-constructive proposal similar to the other houses built in the area by the studio. It was required the basic needs of a summer house: two bedrooms, one with private bathroom, an integrated kitchen and places to be outdoors.

Imposed a materiality and a basic program without any particularity, it was sought in the peculiarities of the plot the subject to deal with the project. It was then proposed that different uses could be located in different volumes that would be arranged naturally into the slope.

This first decision triggered successive solutions derived from it: the turn of the plan in relation to the sides of the lot in order to match its natural slope was the first, with this axis alignment of the house in east-west direction and, consequently, the resolution of two clearly differentiated façades.

The rotation also determined the access from the façade that opens onto the street and the expansion place of the house towards the opposite. The entry to the house was proposed in the center of the plan, i.e. the midpoint of the slope and at the same level of the sector dining room, kitchen and outdoor expansion. From there one ascends to the quieter areas (the bedrooms) and descends to the area of contemplation facing the fireplace.

The house is constructed with two basic materials: exposed concrete and glass. The slabs of the different volumes are supported through concrete walls and beams, and were finished with a minimum slope in order to produce faster runoff of rainwater. H21 concrete was used with the addition of a fluidifiant so that this mixture, with little amount of water to harden, results very compact and doesn’t require sealing. The few interior walls of hollow bricks are finished in concrete screed; floor cloths are also from concrete screed divided with aluminum plates. The openings are of dark bronze anodized aluminum. The heating system, since there is no natural gas in the area, was resolved with a system that combines a fireplace, bottled gas stoves and electric stoves.

Except the beds, couches and chairs, the rest of the equipment of this house is solved in concrete.