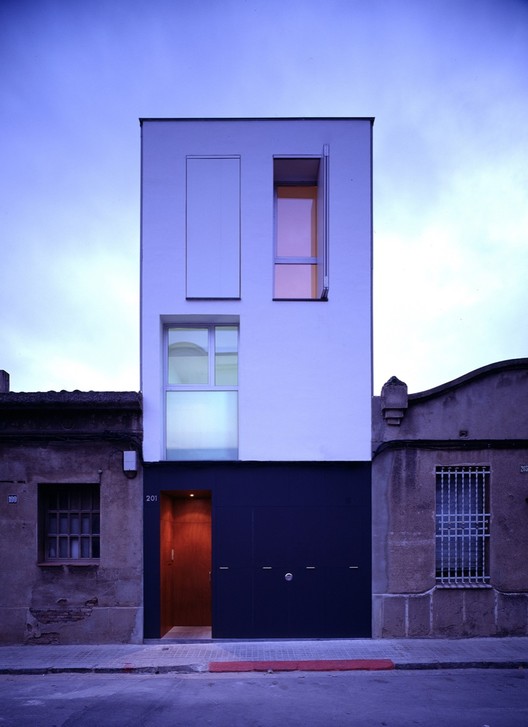 The house for a couple with three children – without noticeable programmatic nuances – is situated in the typical development of workers housing from the first half of the 20th century, close to the historic centre of the city: orthogonal streets and long and narrow lots – four meters -.

The characteristics of the lot and planning usually generate dwellings marked by their lack of natural light and an utter lack of connection in terms of space and ventilation between the façades. The project strategy may be seen in the section of the dwelling: a rather unusual arrangement of the program in floors, the incorporation of a courtyard on the ground floor and the use of the stairway as a tool for natural light an ventilation.

Taking advantage of the fact that the client children were not babies – the youngest was ten- we decided to separate the master suite from the rest of the bedrooms and situate in on the ground floor. The project rejected the normative possibility of occupying one hundred percent of the ground floor and incorporated a courtyard, around which the master suite and the father’s studio were located.

On this same floor, access from the street, converting the garage into the vestibule (or the vestibule into garage). A dark space –black- that admits both, persons and cars.

The area for day use was placed on the first floor (one flight up), on the level of the terrace formed by the ground floor roof. The kitchen, dining room and living room inter-relate without more than the necessary, minimum impediments. Generating a succession of diaphanous and continuous spaces from the façade to the street –kitchen- until the back of the lot –terrace-. The stairway was not interference, it is light and precise.

The children’s three individual bedrooms were situated on the second floor, in the front , tied to the stairway by means of a large studio, which becomes a common playroom.

The stairway- in open fretwork from the first floor is defined with great precision, since a great transparency is demanded of it, both in order to permit the greatest entry of natural light as well as to not block the relationship of the common spaces on the first floor. This tool is connected to a large skylight that captures natural light and ventilation. In defending these objectives, the normative possibility of making an attic crawl space was rejected and the building is covered with an inverted flat roof.

The façade- our façades- in an urban situation as described seeks to recover the compositional values of the traditional façades of most of the houses in the surrounding area. Vertical windows, with opaque shutters, over a background that never questions the wall character of the neighbouring buildings. The façade, with the shutters closed, tends to an absolute silence, altered only by the submerged and coloured door. 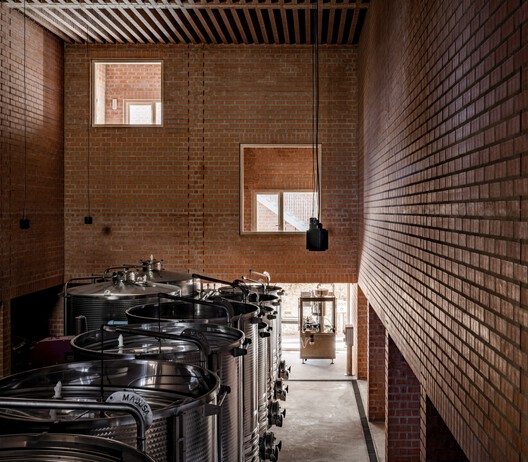