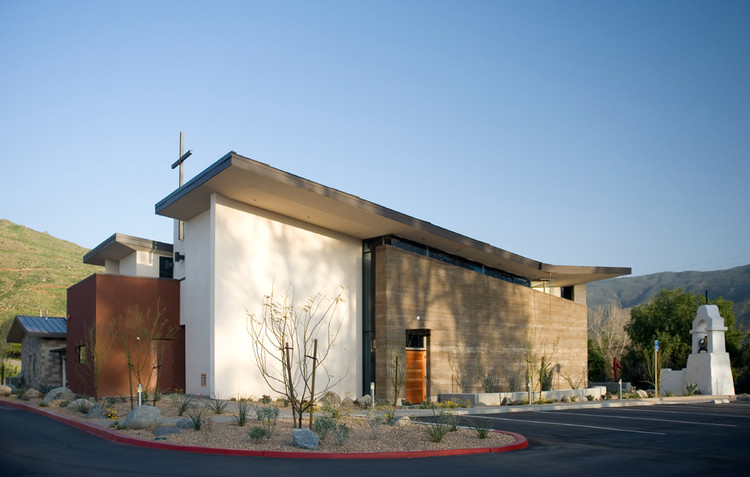 Located in the picturesque back country of northern San Diego County, Saint Bartholomew’s Chapel sits at the base of Mt. Palomar alongside the San Luis Rey River. Originally constructed to serve the Rincon Band of Mission Indians, this satellite chapel is 22 miles East of the Mission San Luis Rey-one of the original 21 California missions founded in 1798 by Padre Junipero Serra.

The very small and intimate historic chapel was destroyed by wild fires that ravaged the reservation in late 2007. Only the original adobe bell tower survived, which became the anchor element in the redesign planning. The needs of the current congregation and community had changed quite a bit in the past 100 years. Though the fire destroyed a building that hosted many, many important events and celebrations, it also presented a “blank slate” opportunity to update the facility, primarily by doubling the seating capacity. A stand alone multipurpose fellowship hall was also added which created a third space, an outdoor contemplation courtyard, in between the two structures.

The new design was conceived to reverently knit together “past” and comfortable traditions, while acknowledging and offering something relevant to current and future generations. Thus, emulating or recreating the past literally was not a project goal. Drawing from a limitless well of Native American and Catholic symbols and metaphors, design elements in plan, section, and elevation were conceived to reference and infuse meaning into the chapel, such as the; rammed earth walls, radial walls, butterfly roof, and extensive use of locally sourced materials.

One of the first questions the design team asked the client was if they wanted to incorporate “green or sustainable” materials, technology, and strategies into the redesign. George Arviso, head of the Church Committee, got a wry smile on his face, amused by the naiveté of my inquiry, responded “we have been living on this land in a sustainable way for over a thousand years.” Therefore, the project was to specifically live a bit lighter on the land, designed to consume significantly less energy and water than comparably sized structures. This was achieved using a combination of high tech products as well as many low tech passive features; the flush mounted thin film PV systems invisibly incorporated into the metal standing seam roof generate a significant portion of the chapel’s needs. Sunday morning services are almost 100% day lit via lengthy clerestory windows and large skylights, protected by oversized roof overhangs. A computer controlled lighting control panel further manages energy savings. Strategically placed operable windows also assist with natural ventilation. The entire landscape incorporates highly drought tolerant species that complement the overall building theme. The chapel is currently pursuing LEED certification at the Gold level.

Because the former edition of the chapel had succumbed to fire, employing materials highly resistant to fire was a significant objective. This lead to one of the most significant features of the Chapel the large rammed earth walls that flank the sanctuary, each nearly 60 feet long, 20 feet tall, and 2 feet thick. The 120 tons of dirt for these walls was harvested directly on site, symbolically important because sacred soil from the reservation was literally molded to form these beautifully textured and organic walls appearing as though the chapel is physically rising out of the site. The rammed earth walls are also reminiscent of the adobe construction found all over the reservation; assuming both modern and traditional sensibilities at the same time. The wood ceiling evokes the previous chapel, the Baptismal Font made from a 3 ton site-found boulder cut, polished, stood up right, and the Altar made from solid 5” thick slabs of wood hewn from a +100 year old Coastal Live Oak donated by a neighboring tribe are just some of the earthy materials that were employed to physically connect this congregation to the beauty of their natural surroundings, the significance of their ancestral home, and most importantly to the Spirit of their God in a very tangible and palpable way.

The historical St. Bartholomew’s Chapel on the Rincon Indian Reservation was destroyed by a back country wildfire. While respecting traditional customs, emulating or recreating the past literally was not a project goal. Design elements in plan, section, and elevation were conceived to reference and infuse meaning into the chapel. Rammed earth walls, radial plan elements, butterfly roof, and extensive use of locally sourced materials all draw from a limitless well of Native American and Catholic symbols and metaphors. A thin film Solar PV system, high thermal mass construction, thoughtfully placed glazing, deep overhangs and ultra low water consuming plant palette all acknowledge the Native way of living lighter on the land. 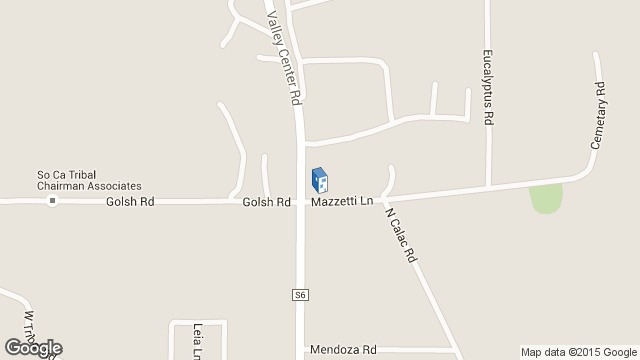 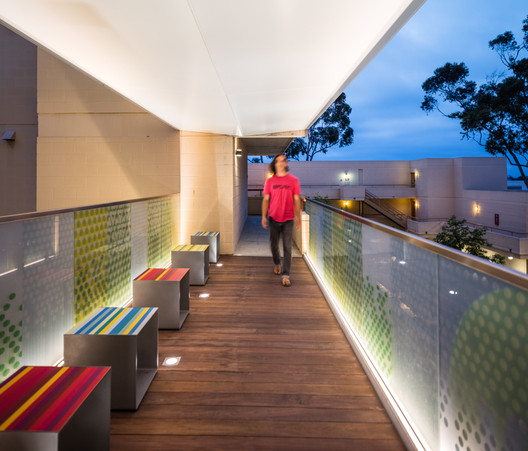