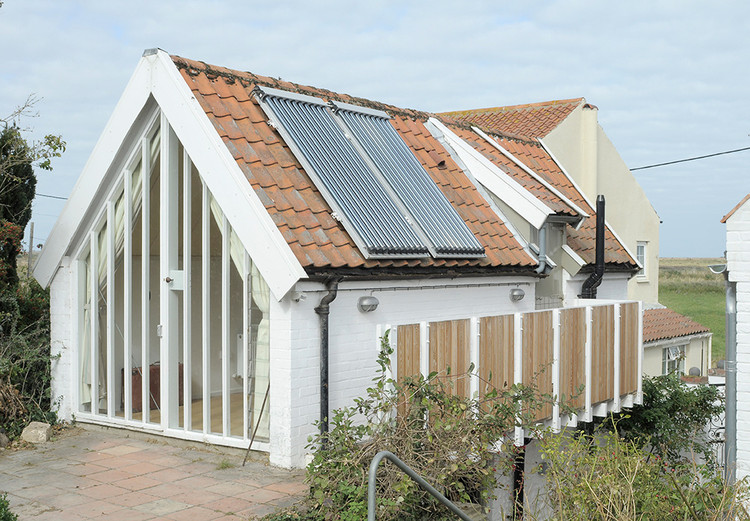 Text description provided by the architects. Cley Next The Sea is a small village on the north Norfolk coast. A group of houses faces the hostile North Sea, separated from it by a salt marsh. The condition of this settlement is fragile. Though sea defences have been intermittently upgraded, rising sea levels threaten its existence in the medium term.

Barry Till (a former head of Morley College) bought a house here in the 1950s as a holiday home and retreat. The house was formerly two cottages with a shared chimney stack that had been knocked into one. It is now owned by Till’s four children, one of whom, Jeremy, is dean of the school of architecture at the University of Westminster and a well-known architect, writer and thinker. Jeremy Till, along with his siblings and parents, commissioned Manalo & White Architects to undertake its refurbishment.

The original brief was direct: there would be little ‘architecture’ in it. Roof timbers plagued by rot were to be replaced; a continuous layer of insulation would be applied to the whole envelope; the ground floor was to be made as resistant and adaptive to the effects of flooding as could be; and the energy use of services would be minimised. Construction should be cheap, and prioritise the use of salvaged materials where possible.

Also importantly, a thesis was developed for the re-organisation of the spaces of the building and its material expression. The resulting composition is analogously a boat on a rock. A new highly-insulated timber roof, wall and floor structure sits on a new brick wall that is built inside the existing thick flint walls. A robust tanking membrane and layer of insulation separates the brick from the flint, though they are tied together with straps. The brick walls in the centre that enclose a bathroom are partitions only, allowing for modification if necessary in the building’s future life.

Till did not want to see the architect’s hand when he saw the space; the detail of the building should be relaxed, even casual. This is evident on entering the large hallway, which the clients think of as a ‘sorting space’. Leading off it are a bathroom, a cupboard, a stair and two bedrooms. The walls, of an inexpensive but textured brick, have been carefully laid with a flush lime mortar.

This language of brickwork is extended to a plinth made for the beds and the interior of the bathroom. Here, tiles whose adhesion would be compromised by flood water are replaced by glazed bricks, sourced cheaply as leftovers from another construction site. This material choice is pragmatic but also gives a vital character to this space, augmented by a shaft of light that drops into the open shower from a narrow but highly reflective light tube.

The bedrooms relate to the sea and the garden. The stark, exposed quality of their walls is relieved by curtains, fabrics and the inhabitants’ clothes that hang openly on pegs and hangers. This motif acknowledges the temporariness of occupation and is a rejection of the hotel-like quality of closets for something closer to the attitude of a Shaker house.

The soffit throughout the ground floor is defined by exposed, oversized timber joists running from front to back and fixed to doubled-up joists coupled with steel that span between the brick walls. The meeting of the joists with the brickwork required a timber wall plate. The awkward junction that results from this deliberately matter-of-fact construction is concealed by a galvanised box section carrying services. It acts as both conduit and cornice. The lighting elements are articulated in a standard aluminium channel that is threaded through the joists and serves to further articulate the ceiling.

The tight stair at the centre of the house leads up to the homelier upper floor through a structure that could only be called a hut. This figurative element has an open roof that, allows light from above to illuminate both the stairwell and the larger space it feeds into. Separating the dining and kitchen and living spaces, it is constructed from reclaimed floorboards and contains a toilet and cupboards. The upper floor can be separated from the space below with a sliding door and hatch. When moved these reveal a perfectly ordered broom cupboard.

The walls of the living spaces are articulated in cheap spruce plywood that travels the length of the upper storey, fire-treated and finished with a white translucent water-based varnish. The battens that conceal the joints between boards are a cheap solution that allows for movement but also gives a sense of measure and grain to this long space. The end walls and reveals to the large existing dormer windows are constructed from Fermacell board on studwork and finished in a warm clay paint.

Brian Greathead, principal of Manalo & White, was taught by Jeremy Till at the Bartlett in the mid-1990s. This patronage of a former student displays a sense of generosity and has led to a client/architect relationship characterised by collaboration and improvisation. This has been reinforced by the thoughtfulness and skill of the builder, Mike Walker, who made a significant contribution to the project’s detail.

The result might be described as ‘bucolic brutalism’ – architecture that is both robust and pleasurable. The language of austerity is employed humanely and delivered with wit and the scheme is a model of architectural and environmental adaptation to the severity of the natural forces that this site – indeed all global coastlines – might face in the future.