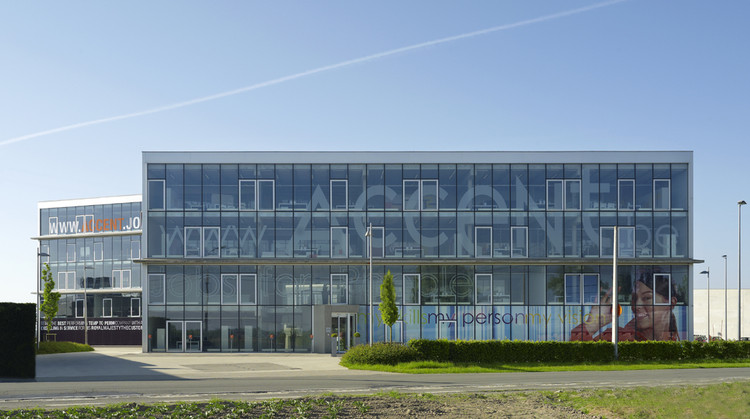 Text description provided by the architects. The widely known company ‘Accent Interim’ has built new offices in the agrarian surroundings of an urban agglomeration. The addition of a new building in this spatial context, where every reference framework is missing, was a real challenge, since such an implant cannot do more than continue the present trend of ribbon development. The implantation of the volumes was determined on the basis of future-oriented sustainability principles, without taking into account the surrounding and fragmented development.

A decision was made for the following concept after substantial research. The building had become broad and very shallow, being completely closed to the south and completely open to the north, with an orientation towards the landscape.

Both of the almost identical buildings have been implanted at a very short distance from each other on the terrain, under application of a small angular rotation. The foremost building is implanted at a certain distance from the street. The water-permeable concrete plate at the front is currently being used as a parking terrain.

A low-budget approach was consciously selected. The primary objective was that the buildings could later be expanded in a simple manner, into sustainably exploitable and energy-friendly offices. The quality of the building lies beyond that and above all in the evolutionary concept: There is, for instance, the possibility of installing sunscreens later on, while all shafts have been overdimensioned and the ceilings leave sufficient space for the addition of an integrated, interactive energy-saving system (thermal recuperation, air quality, etc.), while space has also been made available for an additional technical room for housing these facilities.

That shell of the building has been excellently insulated. In view of the large presence of people, computers, lighting fixtures etc, it is evident that it is not the heating but rather the cooling of the building that requires attention. An increased night-time ventilation is currently available, which is dependent on the temperature of the interior spaces and the outdoor temperature. No active cooling facilities are foreseen, except for the server room. In addition, an automatic daylight control has also been provided (a mixture of artificial light and daylight, with automatic dimming) for the foremost rows of armatures.

The rather flat building is approached by way of a completely glazed northern facade. This shameless display of busyness strengthens the active and open image of the company. The facade is fully used for, amongst others, graphic displays, which give further impact to this image. All employees and all offices are visible from the street and from the surroundings. The high entrance hall further emphasises this great transparency. Attention is pulled towards the only opening at the southern end, an entrance to a projecting terrace near the restaurant on the upper floor. Every workplace not only gets lots of daylight, it also has a fantastic view of the landscape. 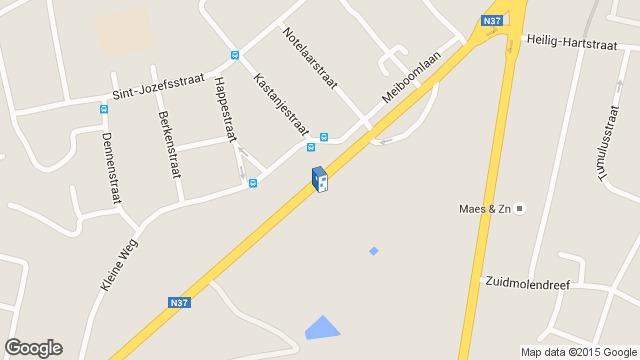